This is the circuit I made - designed it, calculated it, built it: 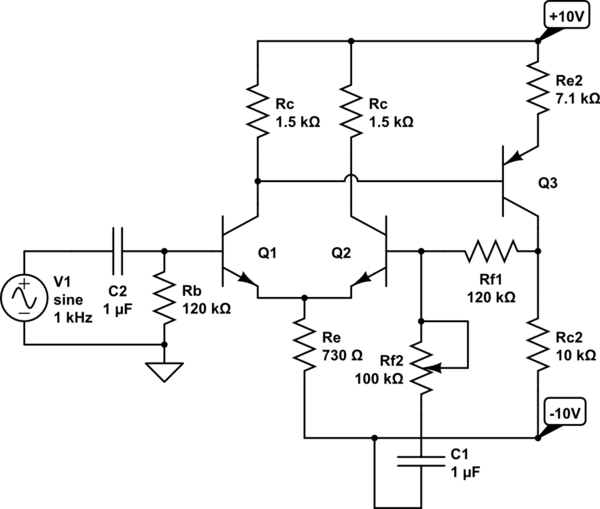 Q1's and Q2's collector current was 5mA, while Q3's was 1mA. Sine wave at the input had 1Vpp at 1kHz. Negative feedback should work since there is a 360 degree shift between input at base of Q1 and base of Q2. Rf2 was firstly decided to be 10k, then it was replaced by potentiometer.

This circuit didn't work as I expected. I expected that if some distortion would occur inside sine wave then it would be corrected by negative feedback or/and differential transistor pair, and the amount distortion being corrected would be controlled with Rf2 (less gain - less distortion).

Sine wave at the collector of Q2 versus distorted signal at the base of Q3 (not on the same voltage scale). 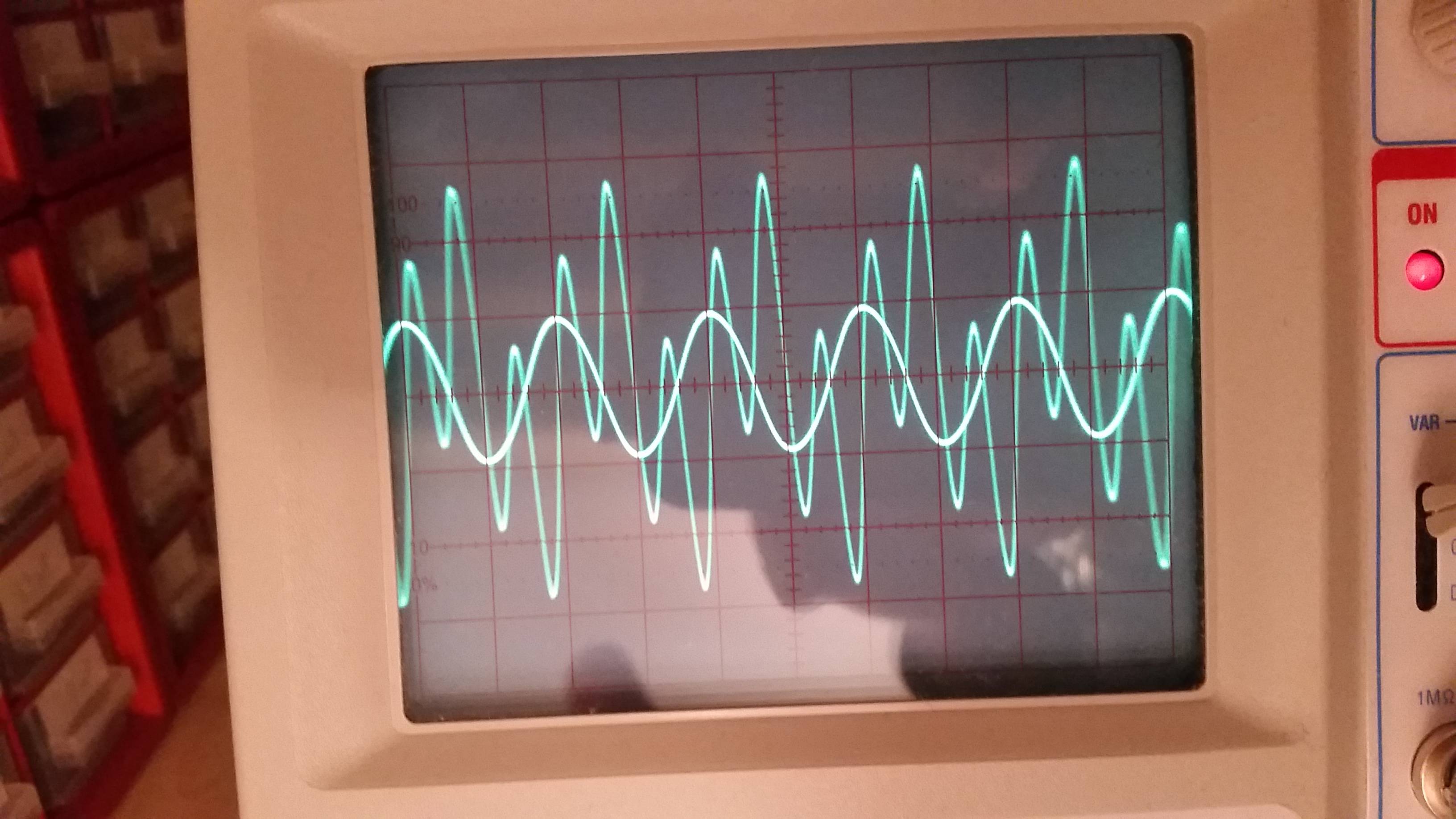 I think that there is still a little gap in my understanding of differential amplifier because I am struggling with this for a while and I haven't made one useful circuit including diff. amp.

Sorry for misanalyzing the circuit - you actually have plenty of open-loop gain - about 100. 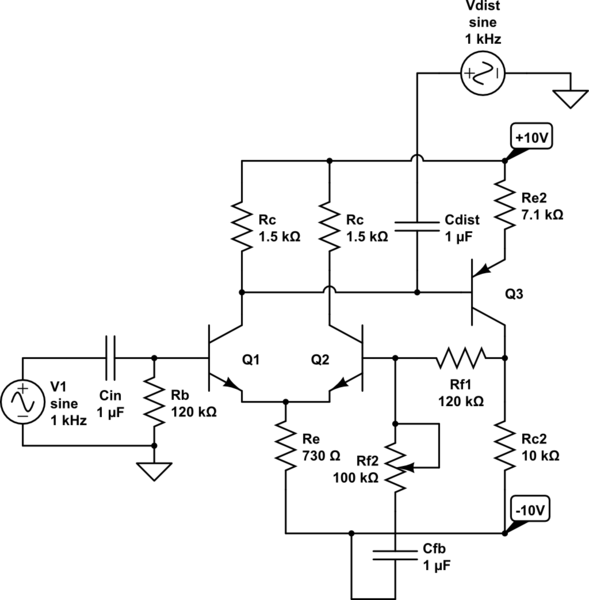 The small signal resistance looking from the bases of Q1 Q2 is very different. I've made Q2's small by adding that a capacitor from the output to Vn. I'm using 10kHz as the "distortion" source since it's easier to see the wigglies. 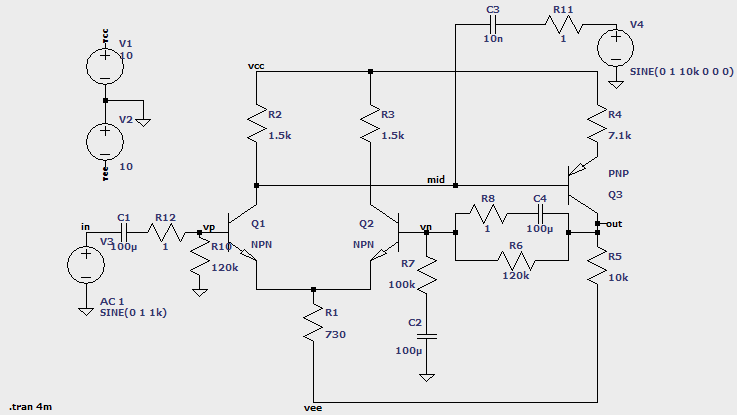 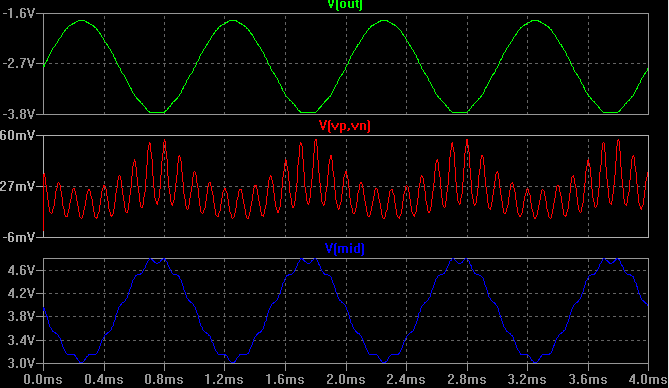 Here it is without that capacitor 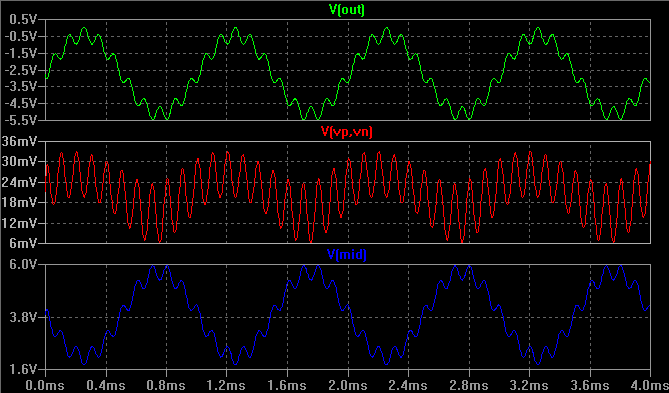 To see distortion, attach the C1 to base of Q2, and let bottom end of just float. Or disconnect Rf2 to avoid any powerline trash it may otherwise pick up from capacitive coupling to your lab' power wiring, or fluorescent lights.

You will see massive distortion, because the diffpair is fully switching, if your input signal is greater than 100 millivolts or so, and if your frequency is faster than the F3dB of your 1uF and 120Kohms (approx. 1Hz)

In fact, given this IS a feedback loop, does C1+Rf1 exactly define the HighPass corner of your circuit?

You will have substantial Miller Effect; the input capacitance of each of the diffpair transistors will be (1 + 150x) * Cob or approx. 1,500picoFarads.

Not the answer you're looking for? Browse other questions tagged differential-amplifier distortion negative-feedback or ask your own question.