How to design a 2nd Order High Pass Butterworth filter with a gain of 6 dB?

I have been trying to design a 2nd order filter with a gain of 6 dB (or 2 Av), using the following Sallen-Key Topology. 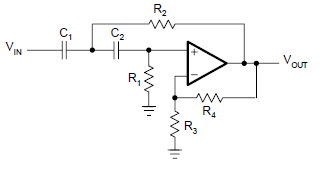 I have calculated R1 and R2 to give me a desired cut-off of 1.6kHz and this part is working fine. I am however not managing to get the gain up to 6 dB.

Following the example from this book, page 450, using the Butterworth co-efficients for Second-Order Filter Parameters α = 1.414 and b = 1.0. 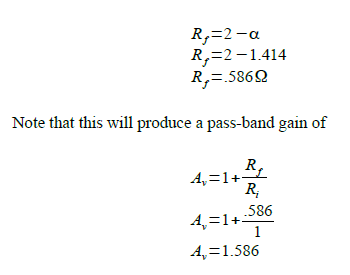 This resistor ratio is providing a gain of 1.586 as per the Butterworth coefficients. Thus my circuit looks like this: 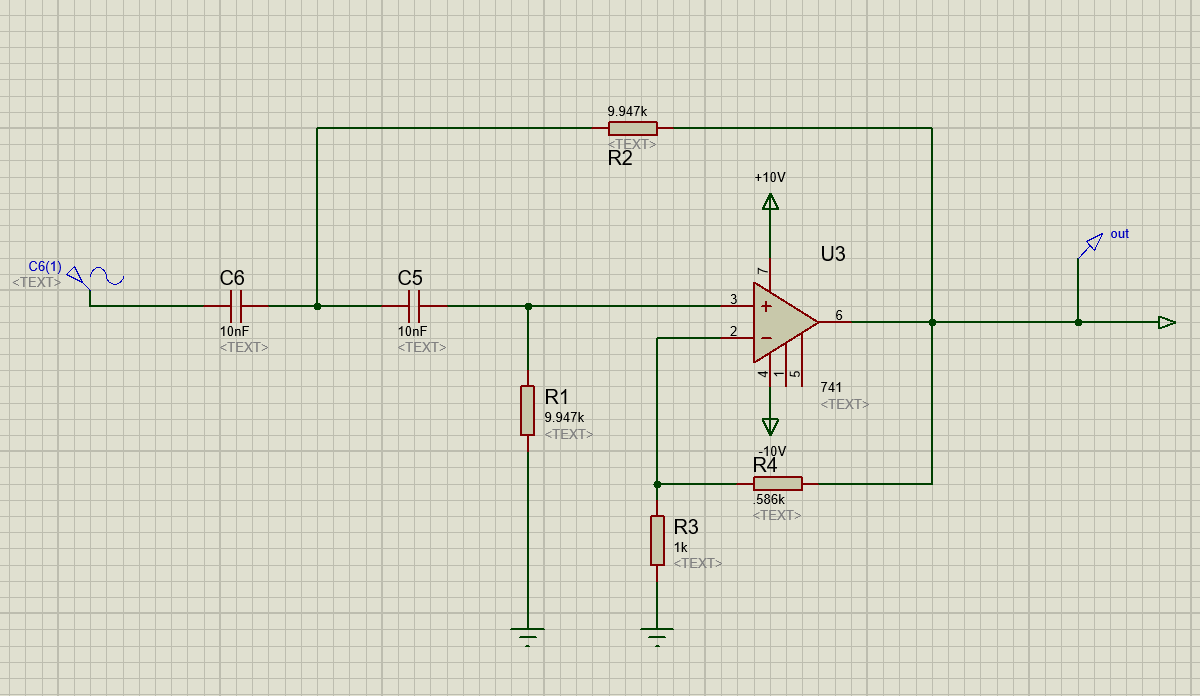 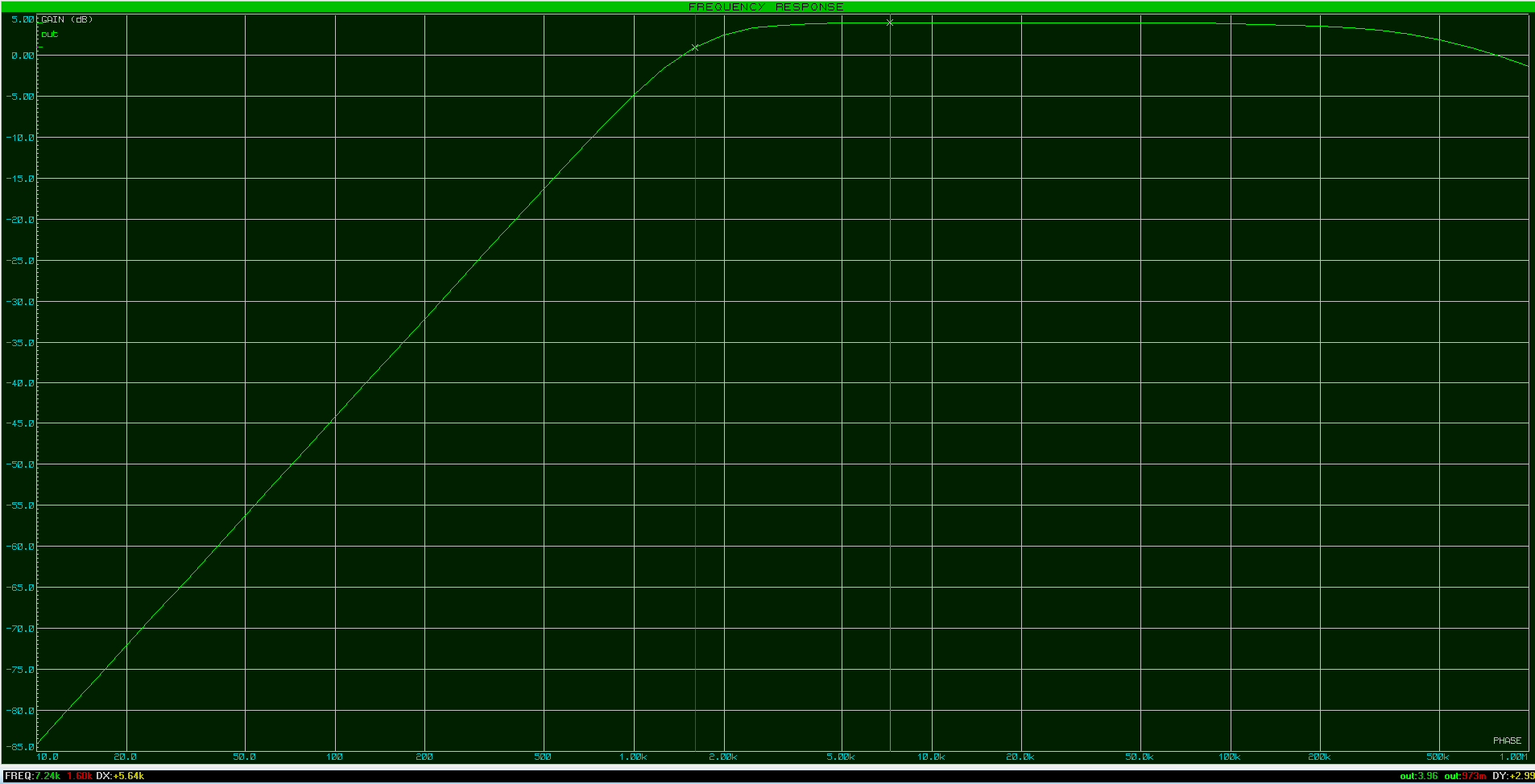 The above image may not be too clear, however the cut-off freq is as desired, however the gain is not 2 AV (6 dB) but 1.586 AV as per the above calculation. I would gladly provide more information if necessary.

How can I alter the above equations to provide a gain of 2 Av while using the Butterworth coefficients?

First I don't understand why you are refering to page 450 of the book; 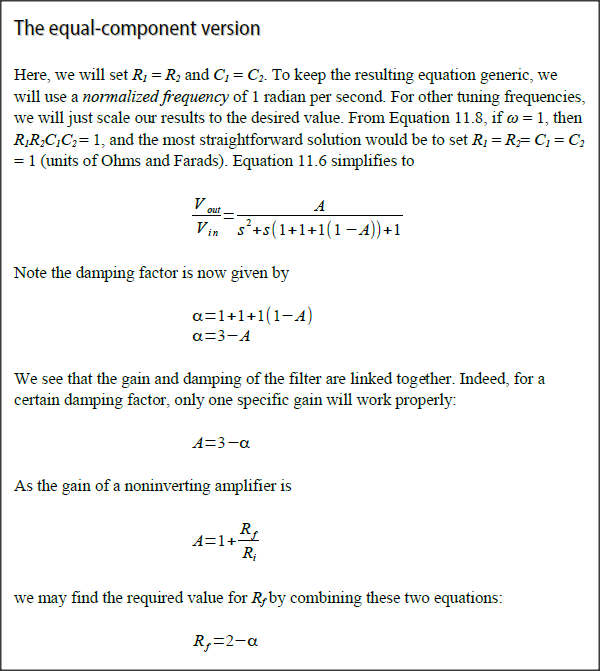 "We see that the gain and damping of the filter are linked together. Indeed, for a certain damping factor, only one specific gain will work properly: A=3−α"

Since we know that for a butterworth-filter α must be sqrt(2) that determines our gain. So to answer the question;

How can I alter the above equations to provide a gain of 2 Av while using the Butterworth coefficients?

You can't without changing the basic circuit because the gain is determined by the topology and the choise of α for a butterworth-filter.

Now to answer the broader question of

How to design a 2nd Order High Pass Butterworth filter with a gain of 6 dB?

You can easily make the gain of your circuit almost anything you want by just adding a single resistor and fiddleing with the values of the existing like this;

The circuit you have can be turned into this one: 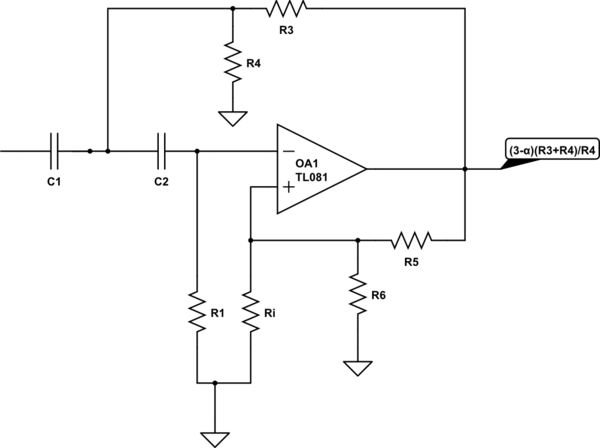 By replacing R2 and Rf with voltage-dividers

To make this work the following have to be true:

R3/R4=R5/R6 <- The two voltage-dividers have to divide the output by the same amount.

Now R6 and Ri can of course be combined, but for the sake of understanding the circuit I left them seperate.

I followed the example in the book for a unit-gain type, I chose 1kHz cutoff and simulated it in LT-spice with the results I got for the resistors and caps. here is a screenshot of the simulation in LT-spice showing cutoff at 1kHz, 0dB in-band gain and butterworth responce;

I then replaced the feedback resistors with voltage dividers as per my suggestion and simulated the results, below is a screenshot of the simulation in LT-spice, showing 6dB in-band gain, cutoff at 1kHz and butterworth-responce.

Sorry I know the pictures are hard to make out.

There is a straightforward solution to the problem - starting with the general transfer function of the circuit. From this function, we can derive the following expressions for an ideal opamp...

For \$k_r\$ we have a quadratic solution:

Note that only the smallest solution is valid (with the "-" sign) in order to keep \$Q_p\$ positive.

Now we compare this circuit specific equation with the second-order general form for deriving the equations for gain, corner frequency and pole quality:

Not the answer you're looking for? Browse other questions tagged operational-amplifier filter active-filter frequency-response high-pass-filter or ask your own question.

4
Voltage Controlled Second Order Low Pass Filter
5
Why does my Sallen-Key 2nd Order High-Pass filter return a square wave? (Beginner question)
1
Connecting stages of active filters vs stages of passive filters
8
What is wrong with this butterworth filter, how can it be improved?
0
Why this high-pass filter behaves like a low-pass filter for high frequencies, on this ideal LTSpice simulation?
0
Avoiding electrolytic capacitors in high-pass filters with sub-Hz cut-off
0
Design of Butterworth high-pass filter
0
Ladder filter without termination resistor?
0
Nth order Butterworth filter transfer function for a given roll-off frequency