I'm trying to control a dc fan with a Raspberry Pi 3 and I'm using a NPN transistor (BC547) to switch the fan on and off.

The schematics I found called for a PNP transistor with a 1k resistor on the base. I left the resistor but used a NPN transistor instead because that's what I had lying around.

This resembles my setup:

The Raspberry outputs 5v (red wire) and 3.3v on the gpio pin (blue wire in picture). (Don't think I need so say this, but ground is black.)

The fan didn't start so I hooked up a multi-meter where the fan should be and I measured 5.6 volts. As a test I then replaced the fan with a 5v led I have and it worked as expected. Still, the fan wouldn't start when I replaced the led with the fan again.

I don't seem to remember using a resistor on the base when I used these years ago (it's been a while since I last messed with these) so I removed the resistor and the fan worked! So now my setup is like this:

I'm confused as to why only the fan doesn't work with the resistor on the base of the transistor. Can somebody explain why?

I don't think your unknown PNP in an unknown circuit has anything to do with this.

You did not calculate the value for the base resistor, just guessed or copied, and it is too high so the transistor does not turn on fully. Maybe the transistor is connected correctly or maybe it is connected backward and thus has lower than normal gain, there is no way to know from the information you give. I can say that it appears to be connected backwards if that actually is a BC547 which has C-B-E order of pins.

Replacing it with a short means the base is getting some unknown current from the virtually shorted RPi GPIO, probably tens of mA. So it works, but the RPi GPIO is being abused.

You also should have a diode across the fan.

Thank you for posting the schematic, however it's usually better to add on rather than edit out information which keeps existing responses coherent.

According to the schematic your NPN transistor is being used in reverse mode. It will have very low current gain in that mode- maybe 5 or 10. So you need to supply excessive base current to get it to turn on. Swap emitter and collector. And a (reverse-biased) diode across an inductive load is usually a good idea.

Here is a schematic that illustrates what is happening and where the diode should go: 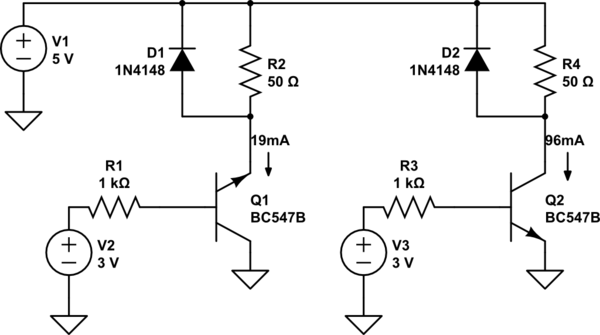 The left circuit is what you have- the transistor is backwards and is operating similarly to the right-hand circuit functionally, but the current gain is only about 7.5.

In general you should reduce the base resistor if the load current is more than about 50mA. For a 100mA fan you might use 470 ohms. That is using a forced beta of 20. The base-emitter junction looks like a diode, so it's about 0.7V drop. The base current is (Vout-0.7)/Rbase. So you can easily calculate the proper approximate resistor value with simple arithmetic.

In your case without the resistor you're forcing the output voltage to be about 0.7 or 0.8V and the current will be above ratings for the RPi.

For a BC547 the typical current amplification figure (at 100mA Collector current) is 120, so to switch 100mA the Base needs at least 0.83mA (possibly quite a bit more if your particular transistor has less than typical gain).

But just being able to pass the current is not enough. To ensure that the load gets sufficient voltage to operate, the transistor must also have low voltage drop at that current. Here a is graph from the BC549 datasheet, showing typical Collector-Emitter voltage vs Base current at various Collector currents:- 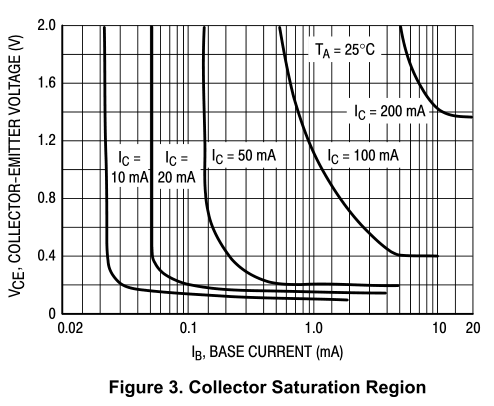 If Base current is reduced below the amount required to switch the desired Collector current then Collector-Emitter voltage rises sharply, leaving insufficient voltage to operate the load. There is also a minimum voltage drop that cannot be reduced by increasing Base current, called the 'saturation voltage'. For example if the load draws 100mA then the minimum obtainable voltage drop is 0.4V, which requires a Base current of at least 6mA.

But why did the LED work when the fan didn't? Presumably because the fan needed more current than the LED, and Base current was sufficient to switch the lower current LED but not the higher current fan. The reason it worked without the Base resistor then becomes obvious - the resistor was limiting the amount of current going into the Base. Without the resistor, Base current was only limited by the internal circuitry of the Pi's I/O port.

The default current limit on Pi GPIO outputs is 8mA, which should be enough to switch 100mA through a typical BC549. With a 1k resistor the Base current would be less than 3mA, which might not be enough (especially if your fan needs more than 100mA to start up).

If the transistor was installed backwards (Collector and Emitter swapped) it would have very low current gain, and so would not work with anything that needed more than a few milliamps.

The schematic below shows the complete picture for a 5 ohm winding motor.

Not the answer you're looking for? Browse other questions tagged transistors raspberry-pi npn or ask your own question.

2
PNP to NPN Transistor switch
2
NPN transistor wired correctly?
1
RPi pin not controlling NPN transistor as expected
1
Need help understanding PNP Base into NPN Collecter circuit for LED Array
3
Why does my transistor saturate when I touch the base?
2
Is this a correct way to use an NPN transistor to disable a push button?