I recently took on this project: https://www.youtube.com/watch?v=WIMhraVcdTg

Trying to use a disposable camera as an EMP generator.

I wrapped my wire around a bottle, but it still won't do anything, except I do hear a little spark in the push button. It goes through the coil but doesn't seem to have any effect.

I connected the coil directly to the capacitor leads with a button and ON/OFF switch. What are some things that would cause the capacitor and coil to not make the EM Field or EMP?

I'm starting to think the coil is not correctly set up or is wound incorrectly.

Is there a requirement I may be missing, for this coil to create the desired effect?

Here is my schematic: 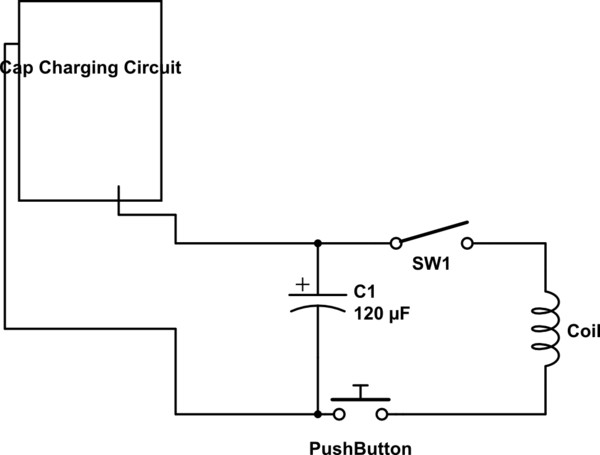 Here is my coil and circuit, what do you guys think is the problem? Do I need a different coil or what? 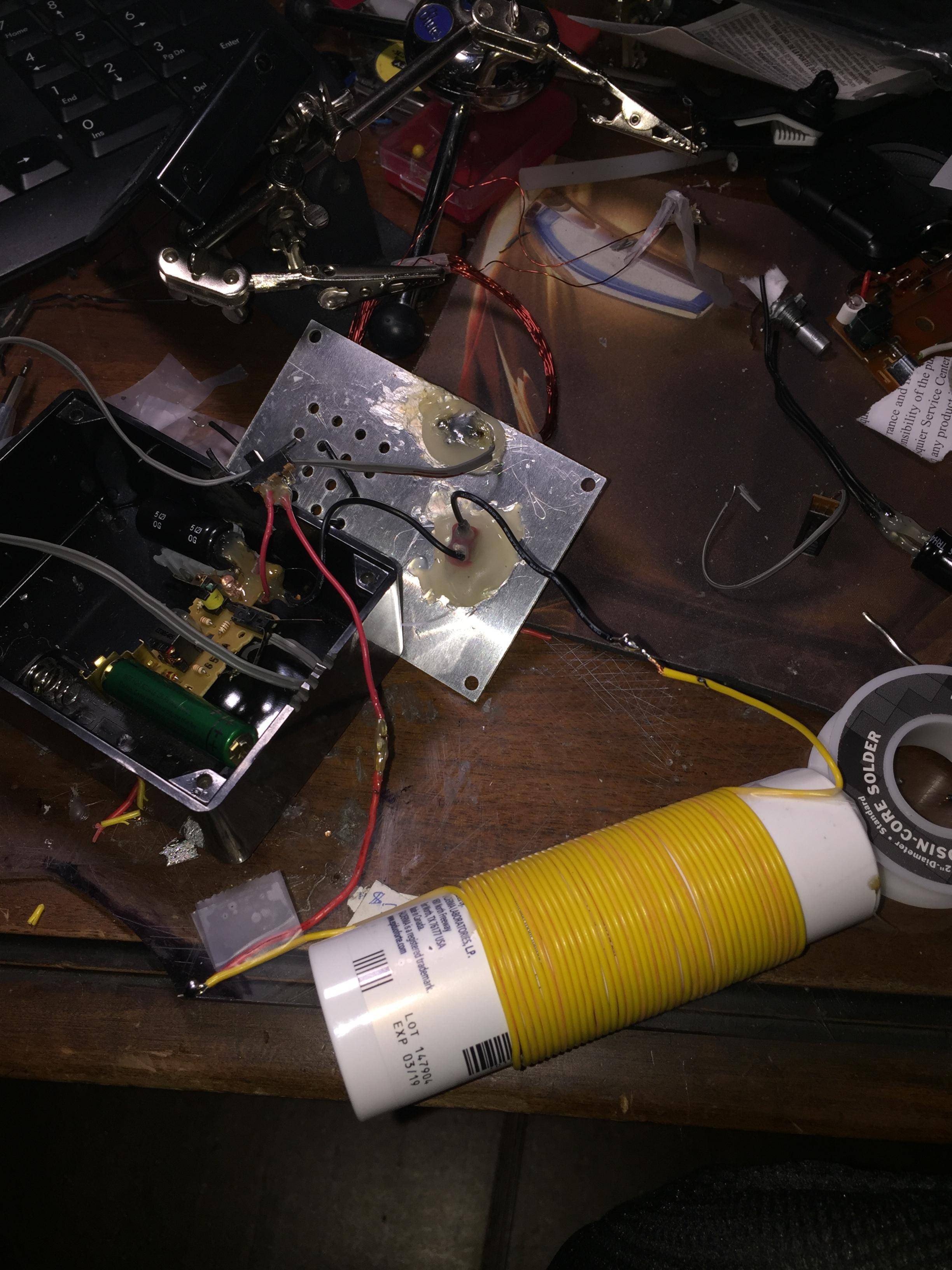 Here is a schematic of the camera, may not be exactly what I am using but a close equivalent:

Of course it is generating an EMP. I'm sure it works fine. The spark you mention when flipping the switch, that would only occur if it worked.

The coil you've wound is a type of electromagnet called a solenoid. If the coil form that it is wrapped around is hollow (which it might be, it looks like a container for something, not sure what), try placing something magnetic (like a screw driver) near the middle of the coil, and flip the switch - you should feel a brief but sharp 'tug' on the screw driver. This way you can actually know for sure if everything is working or not.

Believe it or not, I made something very similar to this, though it uses SCRs rather than a switch and has some larger but lower voltage capacitors, along with some circuitry that makes the thing auto-trigger once the capacitors reach a certain voltage. Using a beefy power supply, it pulses at maybe 2-3Hz. What do I use it for?

Magnetizing screw drivers! Seriously. That's why I built it. Each pulse is like a turbocharged swipe along a magnet, only, in very little time, it will magnetize stuff very well instead of having to drag it against a magnet over and over 100 times. Honestly, what you have built right now is way more useful and you could use it to magnetize stuff... but it's going to be rather poor at generating EMPs. I'd stick with what you have, but if you really want to be the scourge of dollar store calculators.... well, we all need a hobby.

The reason your device isn't causing any problems for whatever poor calculator you're testing it on is your coil geometry and coil inductance.

What I don't understand is why you didn't simply follow the directions in the video. It would work if you did. He says wind about 5 turns, which is roughly what you'd want for a coil the size he's wound. But you inexplicably wound 40 turns. This should be self-evident, but its worth repeating: to get the same results, you have to actually follow the directions. 5 turns and 40 turns is going to be completely different in nature. Inductance is proportional to the square of the number of turns.. so your 40 turn coil has 64 times more inductance than the same sized coil, but with 5 turns. Of course it doesn't behave the same way.

Inductance is measured in Henries, with a Henry being equal to a Volt-second per Ampere. Which probably sounds nonsensical at first. One way to look at it that is relevant to your project is this: Something with 1 Henry of inductance, if connected to 1V, will take one second for the current flowing through it to reach an amp. Or, more simply, lots of inductance makes current actually take time to build up. If you have a 1H inductor, then regardless of the voltage across it, it will take an entire second for the current to reach what ohm's law says it should be.

Long story short, your coil has way too much inductance. It's slowing down the pulse, making it take much too long and instead of an EMP, which is like a balloon popping, you're doing something more like slowly letting the air out of an untied balloon. All of the 'destructive'/interference properties of EMPs are derived from the speed (or rather, short duration) of the pulse.

Also, your coil geometry is the worst possible geometry for what you want to do. It is a solenoid geometry, which focuses most of the electromagnetic energy at the middle of the coil, directly at the half-way point along its length. Very little actually makes it outside the coil, and what does is concentrated at the top and bottom (axially) of the coil. And essentially zero field will be at the sides of coil, which is the only part of the coil you could even get near a calculator due to your construction. The white thing its wrapped around is filling all the spots where there is any useful amounts of anything going on, so even if it did have the right number of turns, you still couldn't get the calculator in the right spot.

You want the coil to be as flat as possible. Like a pancake. In fact, they call them pancake coils. Pretty much the exact opposite of your current coil. But, that's not even really an issue since with approximately 5-6 turns, you can't really give the coil much shape anyway. Also, make sure to keep the air gap (the 'hole' at the coil center) close to what you see in the video. Make it too big, and you'll again have too much inductance. Too small, and not enough.

But, this is good news, because it will take you like 15 seconds to construct the correct coil. If it doesn't work, well... it isn't going to work on every calculator. It almost certainly won't work on virtually everything except really cheap and small/thin give-way calculators. It needs to be directly on top of the calculator, and if its casing is too thick, this alone might introduce enough distance to prevent anything from happening. This thing cannot produce a meaningful amount of far-field electromagnetic radiation, so it works entirely on near-field stuff. Near-field falls off at radius cubed. It takes almost no distance at all to make it not work.

With that in mind, experiment by slowly adding turns to the coil, one at a time, up to maybe as many as 10 turns. If that doesn't do anything to the calculator, you might try 4 or 3 turns, or add a second capacitor for more oomph and try again with 5 turns, slowly working up to 10 like before. If it won't kill (or at least noticeably affect) the calculator after that, it's simply because the EMP generated is incredibly weak and that calculator is not crappy enough to succumb to the interference.

There is already an excellent answer to this question. But since your goal seems to be to mess with the operation of electronics from a distance, an EMP generator is probably not what you want.

A much easier method that will work perhaps up to a meter from the device would be an ion beam/ray. It's fairly easy to generate charged ions and unlike the field effects of an EMP you can aim them in one direction.

You could make a battery powered one pretty easily, using a human body as the grounding element.

The circuit diagram is wrong. The capacitor has to discharge into the coil in series, unfortunately your coil is in parallel to the capacitor. In series you the electrical storage of the capacitor gets converted or "dumped" into a magnetic field. However if the coil and capacitor are in parallel like you have, the electric and magnetic field cancel each other out in the circuit and do not generate the external magnetic pulse you are after. Basically your switch is in the wrong spot because it doesn't switch the capacitor into series with the coil but into parallel with the coil. This schematic will show you what the switch need to be doing for your circuit.

Image source: wikiHow - How to Build a Fancy EMP Generator

Not the answer you're looking for? Browse other questions tagged capacitor coil pulse electromagnetic field or ask your own question.