Pinout for board to board ribbon cable

The question below is based on a false premise: taking into account that an IDC with keys pointing out from the cable on both ends swaps the front and back rows, simply rotating one of the connectors gives a 1 -> 1 mapping (thanks @DiBosco for pointing this out). The only remaining difference is that the notch of the connector on one of the footprints has to be on the opposite side relative to pin 1 as compared to the other.

I do believe that the fact that I readily made such an error in my thinking, which would have led to a pair of incompatible boards, shows that the following question is relevant:

Also, related to the original question: now I still need to have two footprints, or I have to specify externally for assembly that the relation between the notch and pin 1 is different between the connectors on the two PCB's. Is there any neat way to deal with this?

I need to connect about 24 signals (give or take, depending on how many pins to dedicate to ground and power) between two PCB's. My current idea is to use a 0.050" ribbon cable with IDC connectors on ends (although see the end of this post).

When in use, the two PCB's will be laid side to side, and if I then place the connectors in the same position, and I want them to be keyed (say, a shroud with a notch on the side of the odd numbered pins), and connect the ribbon cable, I get something like this is wrong, I'm leaving it here for reference: 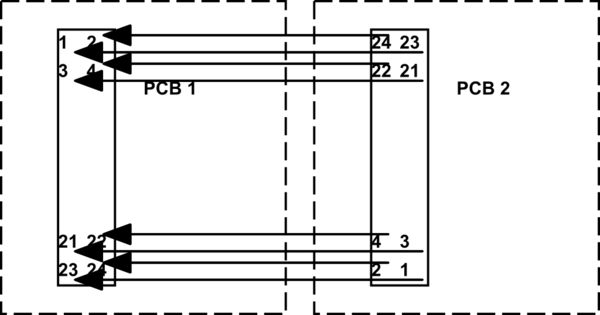 My question is: while I can of course figure out the correct pin mapping by simply finishing the picture above, I feel it is a bit error prone (since there's no ERC or DRC checks across the two PCB's in my EDA). Also, I would imagine I'm not the first one to come across this problem, or one of a number of related pin mapping problems (say, stacking boards with connectors on facing sides). So I'd like to find a resource which would give the correct pin mappings for this, and preferably other related problems, but my google-fu has not been strong enough. Is there such a web site?

P.S.: any suggestions on better ways to connect the PCB's are welcome. PCB space is at a premium, I was just able to fit a 0.050" SMD -connector, but on the other hand the connection will be made by the end-user, so it must not be too fragile or difficult to connect. The device is a eurorack modular synth, so the user is familiar with connecting 0.100" IDC for the power, which is why the smaller IDC would at least bring some familiarity to the user. Currents and frequencies are rather small, < 50mA and < 1MHz.

Here is how you should do. It is actually very straightforward. The PCB footprint is the same on both sides, and the numbering is the same too.

What you had wrong, probably, is that you weren't considering having the notch underneath the ribbon for one of the connector (and only one). 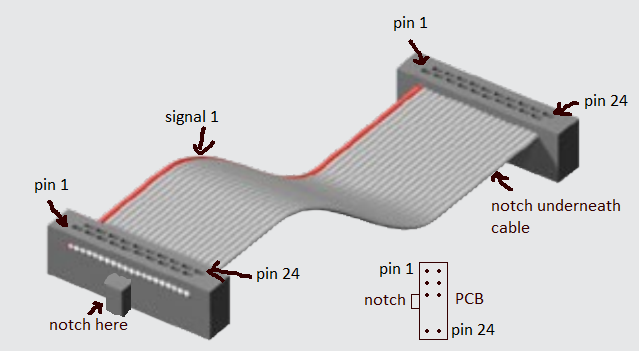 This is a common issue when interconnecting boards with ribbon cables if you do not think it through properly. There is no real resource for this, other than anecdotal answers like this one. Your proper method is to have the actual parts in hand when you are designing your system and see/understand how things are going to fit together and what that requires for the schematic design.

If you use vertical connectors it is not so much of an issue, you simply need to ensure that Pin1 is oriented in the same direction on both boards when they are in their final relative positions. 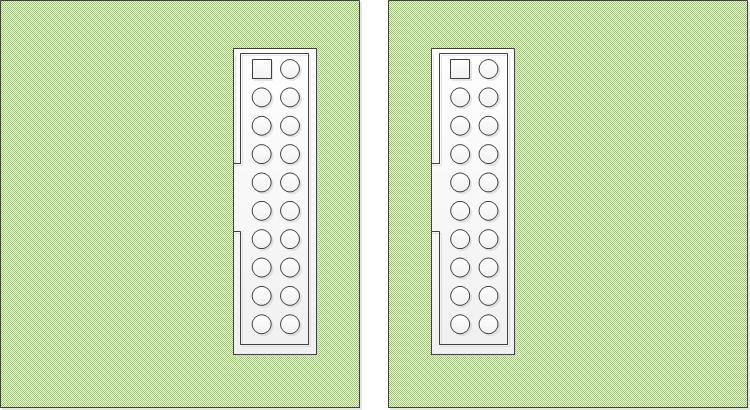 The cable is then simply constructed as shown in Dim's answer.

If, however, you use right angle connectors things are different.

Since you want the cable to exit from the edge of the board you are pretty much forced to rotate one of the connectors relative to the other one. 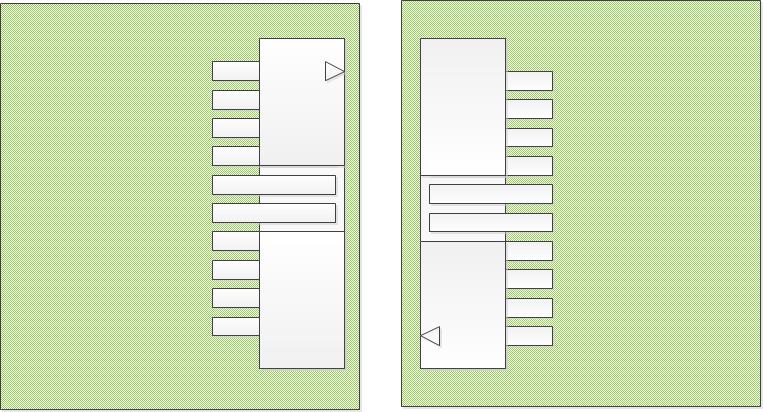 The schematic wiring then needs to be reversed on one of the boards and the ribbon cable needs to be constructed differently, as shown below. 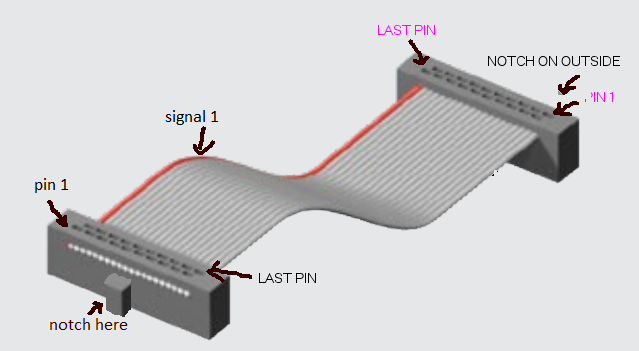 When you get it wrong

Unfortunately, if you do that wrong, there are only three "quick" fixes and that all require twisting the cable through 180 degrees on its way to the target.

Fix 1: Remake the cables so you have to twist them correctly.

Fix 2: Move the right angle connector to the back of the board. This basically flips it 180 degrees.

Fix 3: Swap one or the other to a vertical connector and rotate it 180 degrees.

The other fixes are...

Rotate one or other of the boards so the connectors are pointing in the same direction and use a longer cable, or flip one of the boards and mount it upside down. But that of course will depend on what else is connected to it.

If worst comes to the worst, ditch the ribbon cable and use stranded wires in headers and integrate the polarity change in the harness, or design and have made a gender bender adapter board to go in between.

Ultimately, you need to redesign one or other of the boards to change the pin numbers on the wires going to the connector to be the other way around.

Not the answer you're looking for? Browse other questions tagged connector pinout ribbon-cable interconnect or ask your own question.

8
Looking for a board-to-board cable
3
AMW ribbon cable
3
Making my own 8x2 pin connector cable
0
24AWG Ribbon Cable Connectors
1
A DIY solution for IDC cable
1
Ribbon cable pin order
1
Efficacy of more lines of power on legacy ribbon connector with limitations
2
Is there a DuPont housing, but with larger body and index key like an IDC connector?