I have a 7 segment display that has 4 digits. What will I need to make use of this? Can a single microcontroller handle the operation? I mean PIC16F690...I saw also a MAXIM chip that drives these kind of displays...is it absolutely required?

Here is a picture from the datasheet, I don't know why there are 2 pin diagrams? 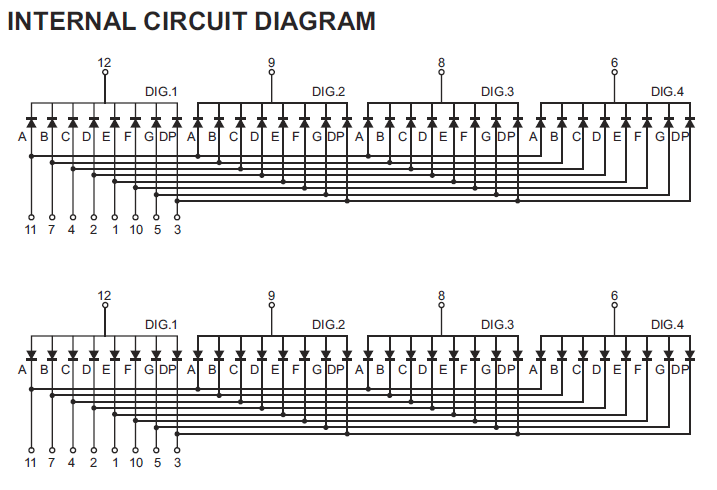 Here is a link to the datasheet

You connect the segments A..G, DP via 8 series resistors to 8 I/O pins of the microcontroller. Driving a pin high will light that LED on the selected digit. To select any of the 4 digits you make the corresponding common cathode low via an NPN transistor, which you again drive from an I/O pin via a resistor.

If your supply voltage is 5 V and you're using red LEDs then you can use 150 Ω resistors instead of 330. Also decrease the transistor's base resistor values to 2.2 kΩ, and use for instance BC337s for the transistors.

To drive the full display you first make pin 12 low by driving its transistor with a high level, and set the I/Os for the segments of that digit. Some time later you switch pin 12 and the segments off, and switch 9 on, and again the segments for the second digit. And so on. If you go from 1 digit to another in less than 2.5 ms, then the whole display cycles at 10 ms, or 100 Hz, which is enough to avoid noticeable flicker.

You can use the Maxim driver, like the MAX7219, but it's Damn Expensive™: 12.80 dollar in 1s at Digikey. The good thing about it is that it takes care of the multiplexing for you, so you just have to load it with the segment data for the 4 digits. It also has software brightness control.

I checked the PIC16F690 datasheet, and unlike other microcontrollers its I/Os don't seem to be able to source 20 mA (which is disappointing). So you'll need transistors on port 2 as well: 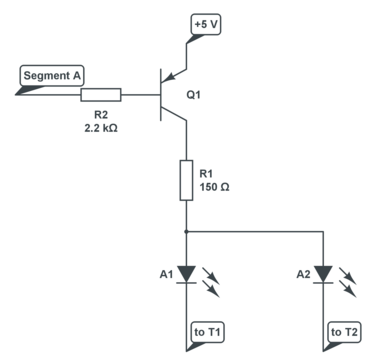 R1 was one of the resistors on port 2. So you insert Q1 and R2 between them, and repeat that for each of the 8 segments. Attention, Q2 is a PNP! Any general purpose PNP transistor will do.

Not the answer you're looking for? Browse other questions tagged microcontroller pic 7segmentdisplay or ask your own question.