I have a switching regulator that puts 100MHz noise onto the power supply that it shares with a microcontroller, and I'm trying to filter this noise to give the microcontroller a clean DC power source.

Unfortunately my 3 filtering attempts don't attenutate the noise very much: 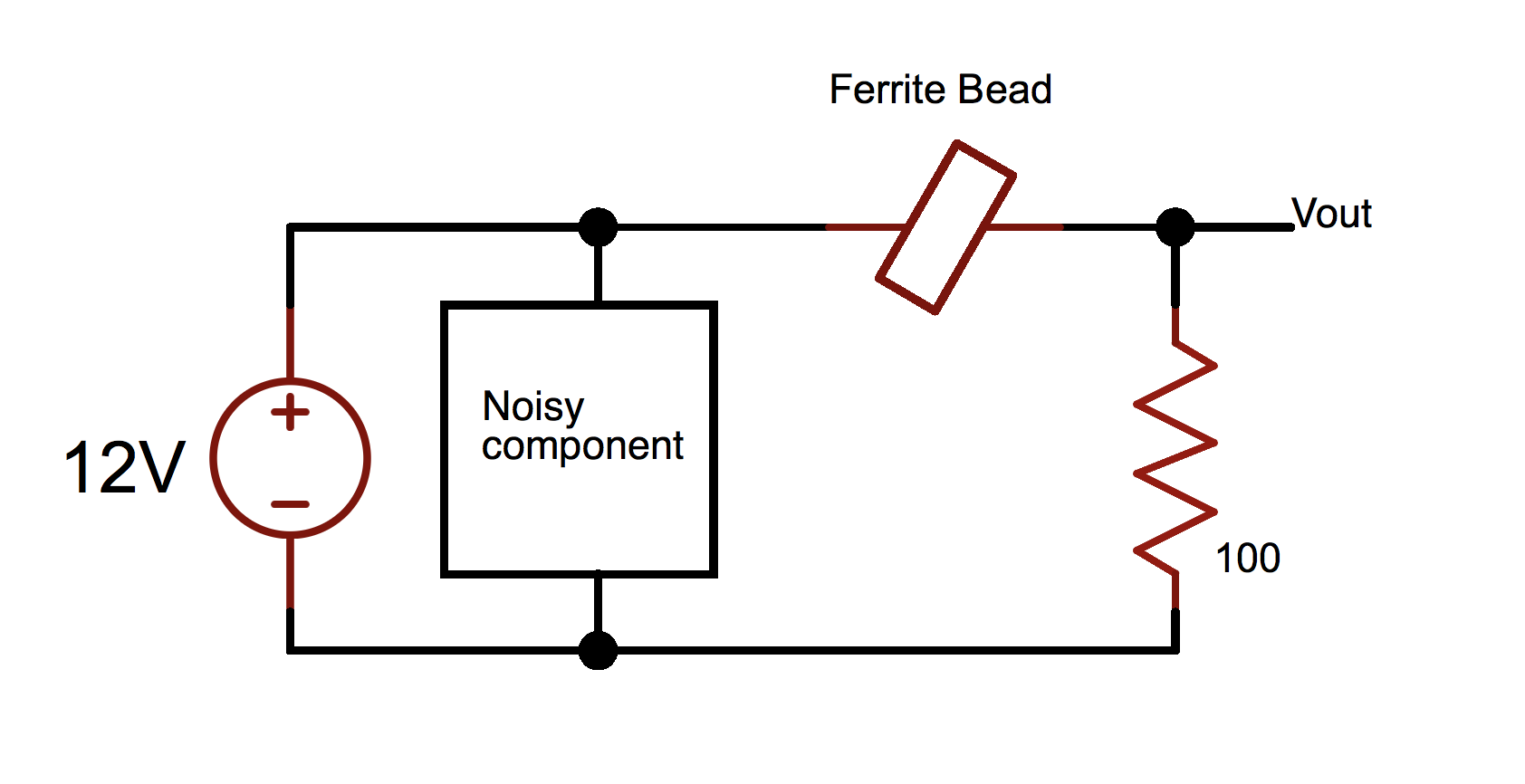 Here's a picture of the ferrite bead circuit and a scope shot (NoiseIn=yellow, NoiseOut=green), for example: 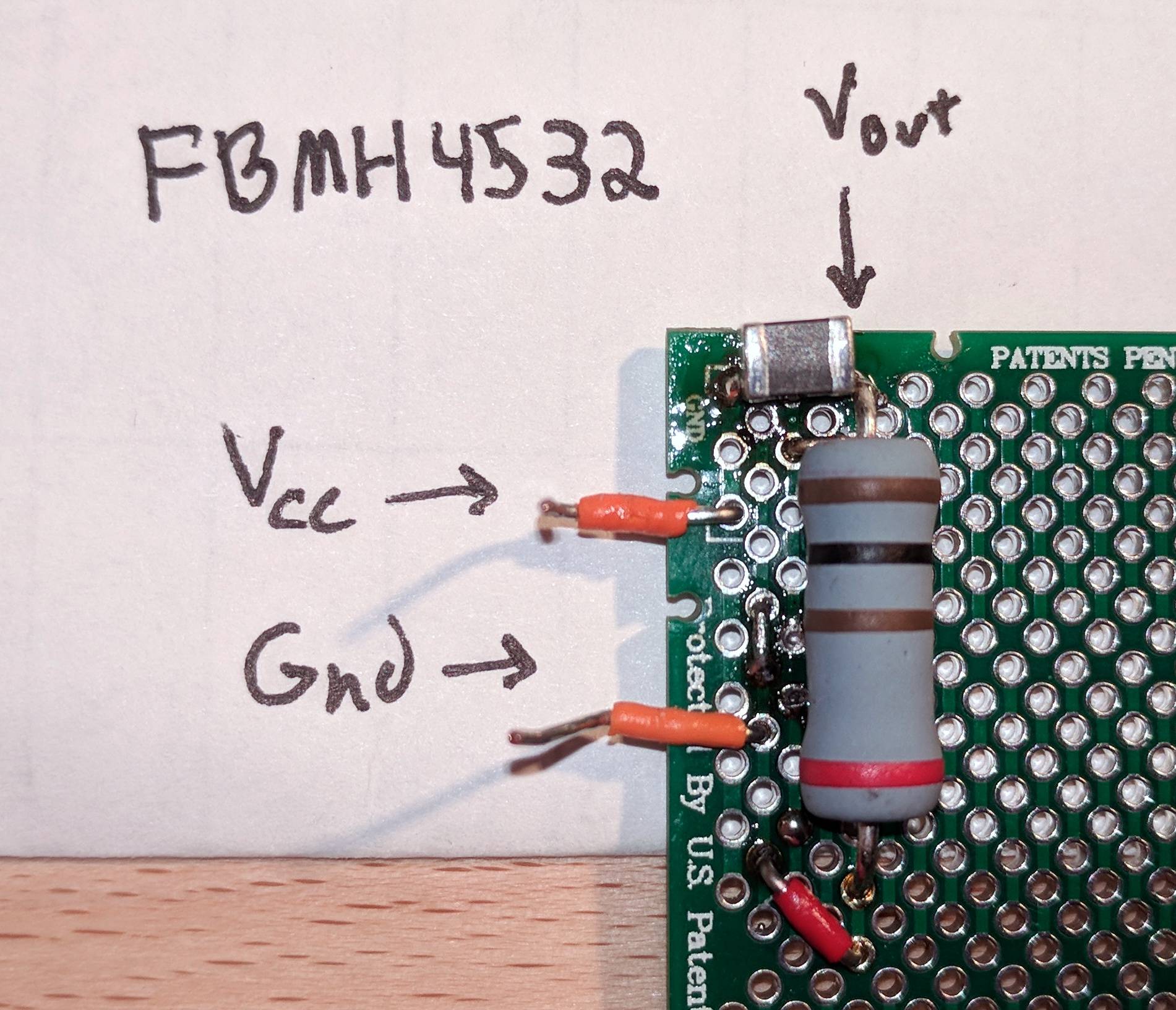 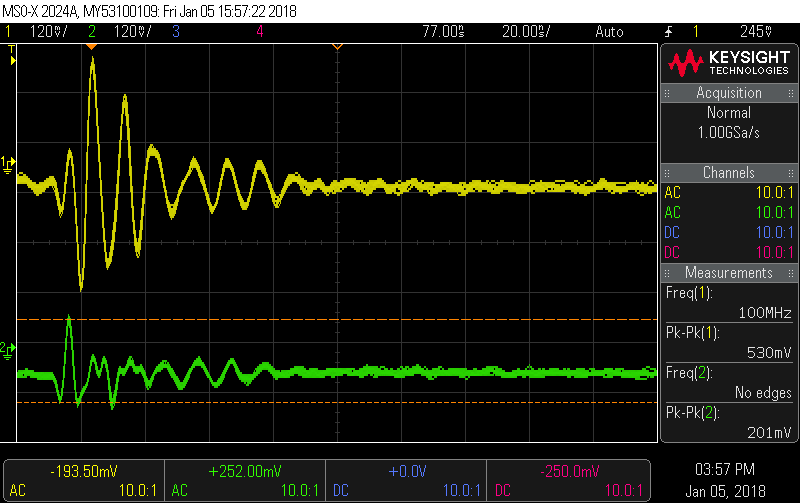 Why don't these circuits attentuate the noise closer to the expected amount?

Consider preventing noise pollution on the 12V supply in the first place. 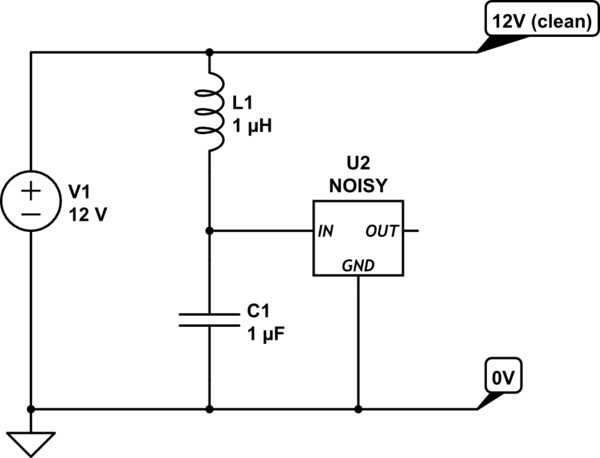 simulate this circuit – Schematic created using CircuitLab
Keep the loop area of the noise as small as possible - ensuring C1 is (a) adequate for U2's HF current demand and (b) as close as possible to its supply pins. And ensure L1 (or ferrite bead and/or feedthrough cap) provides enough impedance at 100MHz to prevent noise reaching your 12V supply.

Of course you can add further decoupling on the 12V supply - L2 and its impedance at 100MHz form a voltage divider, attenuating the noise on U2's 12V input.

Why don't these circuits attentuate the noise closer to the expected amount?

Because they are not the actual circuits. After adding in some of the parasitic elements, the inductor circuit looks more like this:-

It seems you tried all but the obvious, which is a inductor in series followed by a capacitor to ground. As Brian Drummond said, put that on all the power feeds, especially the one making the noise.

You may actually not need to filter the power to the microcontroller at all. The micro isn't running at 12 V, so you have a power supply between the noisy 12 V and the micro anyway. That's going to make its own noise, so even starting with a perfectly clean 12 V isn't going to get you much.

Microcontrollers are tolerant of some noise on their power. They are run from switching power supplies routinely. Any competent switcher will have less that ±50 mV noise. That shouldn't cause any problems in most cases.

You do probably want the analog section power input (assuming your micro has one) to be cleaner. I usually filter the main power thru a chip inductor followed by 10 to 20 µF to ground. Sometimes I use two of these in series. The analog power input of a micro usually draws little current, so the little voltage drop due to the DC resistance of the chip inductors is inconsequential. My jellybean chip inductor is 950 nH and 600 mΩ. Even two of those in series times 20 mA, for example, only drops 24 mV.

If by chance it involves a little (usually black) wire with a croc clip one one end dangling off the side of the scope probe that that is likely your problem, it adds a huge amount of inductance AND can act as an aerial.

There are many web pages discussing good probe technique.

My favourite approach to noise measurement is to stick the scope in 50Ohm AC coupled mode (Or use a DC block and feed thru terminator) and use a bit of coax soldered right across whatever point I want to measure to connect the scope, usually MUCH better then a scope probe for this sort of thing.

Not the answer you're looking for? Browse other questions tagged power-supply switch-mode-power-supply filter noise passive-filter or ask your own question.