Is there a good topology for splitting a DC power supply from a few LM2576 and LM2577?

So, this isn't the most serious project, more of a toy/hack, but I have a some LM2576 and LM2577 and I wanted to see if I could somehow get an adjustable dual rail (bipolar) supply out of them, for example, from V(in) = 24V DC.

I know the LM2576 does inverting buck-boost but if you read the fine print the efficiency is horrible, so I'm disgarding that for now.

The only other thing I can think of is to use an LM2577 in flyback mode as per the data sheet creating a preliminary V(+) and V(-) which can then each be stepped down by their own LM2566. In this case, I can't seem to find an appropriate flyback transformer (the exact parts in the datasheet aren't stocked by Mouser anymore) and I'm not that confident this would even work. It seems like it might be unstable and noisy.

I'm more interested in just using these parts and quantifying the result rather than meeting specific requirements but I would like to get 1-1.5A out and be able to (adjustably) produce symmetric positive and negative rails from a specific V(in) (e.g. 24V.) The original goal was to get an LM317 and LM337 pair to track an LM2577 each but I'm not sure how realistic that is now that I see generating negative rails is a bit of a pain without a center tapped transformer or already having a negative DC rail.

I'm not going to try for a full answer here. A complete design would be crazy-minded as an answer. (Not that I'm not crazy-minded. Because I am. But because I'm just not that crazy-minded.)

I'd start out with a basic behavioral model like the following:

Here, you can see that the rail splitter precedes everything. You can get an IC to provide this, but it won't have much drive capability. So you may as well design your own (my opinion.) The rest of the stuff I added at the end is intended to "get the idea across" of what happens afterwards if you stay simple, linear, and avoid switchers. It won't be efficient. But it is easy to design and get working and you can find dozens of related designs. But it is NOT intended as an actual design. You may need transistor bypasses around the linear regulator boxes, for example. And the dual tracker is just a functional blob that also needs designing. But it gets the idea across?

You can replicate the dual tracker and linear sections for as many tracking supply rails as you want, of course. It's just more stuff (which may interact -- oh, well.)

The Sziklai arrangement isn't much different that might be used for a power audio amplifier. It would look something like this: 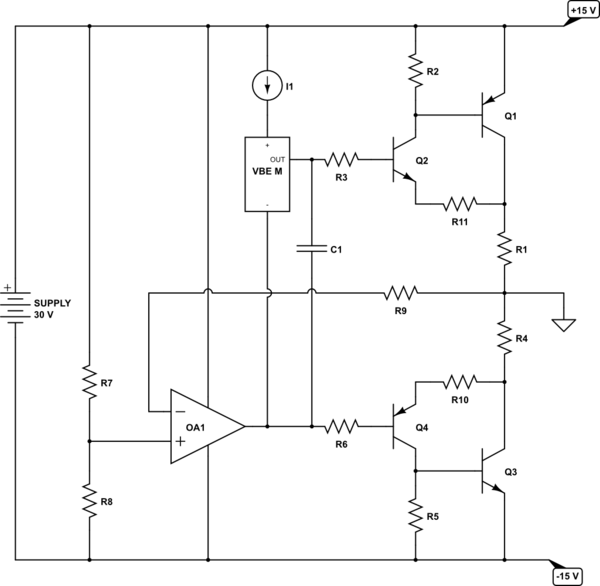 Here, the basic idea is that you have a "mid-point" reference. This can be either two simple resistors (\$R_7\$ and \$R_8\$) or else some rail splitter IC, if you prefer. If you don't use a rail splitter IC, you can also add capacitors, perhaps bootstrapped, to help stiffen up the resistor pair. But start with that idea as it is and worry about improvements later (new questions?)

The opamp is there to drive the 2-quadrant Sziklai power driver to keep ground at the mid-point voltage. If something attached to the \$+15\:\text{V}\$ rail draws more current for a moment, then this current will pull upward on the ground reference more than before. The opamp will see this as causing the ground to appear slightly higher than the mid-point voltage (the value present at its non-inverting input) and will respond by lowering its output and thus sinking more current through the lower quadrant Sziklai section and thus pulling ground back down to where it needs to be. (\$R_9\$ is there for helping to balance out bias current issues with the opamp.)

The values of \$R_1\$ and \$R_4\$ are very small. You don't want more than few tenths of a volt across them at full output current (which will still be significant power loss.) They are there for thermal reasons, among others. But the opamp may help a lot here, too. So just put them in and expect to adjust things a bit until you like the results. (I don't want to spend a lot of time on this topic.)

You will have to work out a means of providing a current source into the \$V_{BE}\$ multiplier. Also, I don't show a method for adjusting the value of the \$V_{BE}\$ multiplier, but you will need some method there (variable resistor, or else just tweaking until it is right.) And the \$V_{BE}\$ multiplier is a whole other subject. It needs a collector resistor that isn't often shown when googling around so as to deal with thermal and Early Effect compensation. So that's another question, perhaps? (Again, I don't want to spend a lot of time on this topic.)

\$R_3\$ and \$R_6\$ are not often important but can be a hundred Ohms or so. They are sometimes part of a current limiting system which isn't shown here. You can remove them, entirely. \$R_{10}\$ and \$R_{11}\$ are emitter degeneration, of course, but actually do more in terms of countering some tendencies for HF oscillation. Again, you can often just remove them.

Finally, we get to the Sziklai. For this, you need to calculate the value for \$R_2\$ and \$R_5\$. First, you need to compute the desired quiescent current for operation. This should be approximately:

The \$V_{BE}\$ multiplier will, if correctly designed and thermally connected to \$Q_2\$ and \$Q_4\$, track pretty well and provide a relatively stable quiescent current value regardless of temperature. But trying to make one that also tracks load current variations?? That would be insanely hard for purposes like this. You do NOT want to go there.

You will later need to adjust your \$V_{BE}\$ multiplier so that you get the value of \$I_Q\$ correctly arranged. You can measure this by looking at the voltage across \$R_1\$ or \$R_4\$ (or both, I suppose, in series.) This is another reason for including those two resistors, by the way.

Finally, the \$V_{BE}\$ multiplier needs to be designed and tweaked so that it has a parabolic voltage response to temperature over the range of temperatures you want to support. This is where that collector resistor I mentioned comes into effect. And that is an entirely different process with new considerations. You can, of course, just plug in a \$V_{BE}\$ and adjust it and completely ignore the thermal stability and Early Effect bits. You will survive. But to get things right with discrete parts, even that tidbit inside this circuit can be a pain of sorts.

The derivation of the \$I_Q\$ equation is perhaps for another day...

Not the answer you're looking for? Browse other questions tagged power-supply switch-mode-power-supply buck boost buck-boost or ask your own question.

7
Highly Distorted Output of Class B Power Amplifier
6
How to make a simple negative power supply
0
Power Supply rail shorts to ground when loaded
0
How to supply an op-amp from a 9V Battery?