Why do push button telephones use dual-tone for signalling?

Here is a related information from wikipedia: 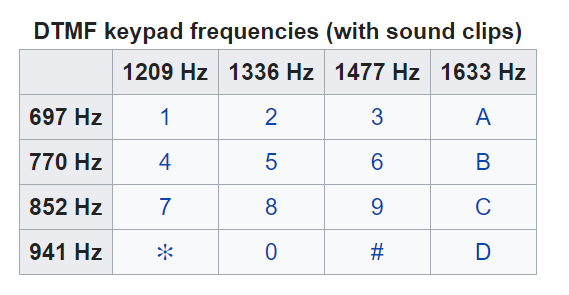 Above shows that if one pushes number 1 he sends the mix of 697Hz and 1209Hz to the telephone station/center through a wire.

The two reasons are simple:

Consider that a phone line may be highly distorted : the second harmonic is one octave above the fundamental, and the third harmonic of a note is an octave plus a fifth. If you used more musical intervals between dialing tones, harmonic distortion could result in dialing the wrong number.

The frequencies were chosen (citation needed, no doubt - here for example ) to reduce or eliminate the possibility of harmonic or intermodulation distortion between tones being mis-detected as the wrong number.

If you used single tones instead of dual tones, you'd need 16 of them instead of only 8 as in the DTMF system.

Given that they have to be spaced far enough apart for reliable detection, and that you only have the range from 300 to 2700 Hz to work with, you'd probably find it difficult to decode that many different tones reliably using the technology available between 1950 and 1963 (when touch tone dialing became available.)

Two tones also helps to reduce false detections. If you only pick up one tone, you ignore it. If you pick up two valid tones at once then it is much more likely to be an intentional dial command.

As to why they didn't use musical notes, I'd guess because they were more concerned with getting tones in a range and spacing that was good for detection and easy to generate. Also, you don't want a harmonic of one tone to be the same as one of your higher tones. If you used musical notes, that would be the case. Look at the frequencies used. None of the higher tones are a multiple of the lower ones.

It is because phone systems were designed with in-band signalling due to technical limitations at the time.

The signaling worked over the existing telephone infrastructure that previously was operated by hand, aka hello operator, connect me to 4562.

The dual tones required allow to distinguish the tones from normal speech that could have the same frequency, but would not have both at the same time.

The frequencies used were spread out to make it easy for the signaling system to distinguish them even when noise was present over the line. I doubt it had anything to do with musical tones.

Less frequencies needed => simpler to produce digitally, analog base timing oscillator can be accurate enough because the allowed error is bigger, less tuned detectors needed: 8 vs 16.

2 frequencies at the same time (carefully selected for preventing distortion to make false mixing products) => not highly probable to be produced accidentally in ordinary sounds.

A legend I have heard: Single tone coding has been in use as internal telephone system signaling method until a boy with capable brain, criminal mind and perfect pitch ear learned how to whistle transcontinental free calls and how to put the central down.

28
Why do PBX systems use -48 V?
0
Why should I use DC coupling when I'm finding the frequency response of a circuit?
0
Use of frequency multipliers for a signal with DC component
1
How to use VBT-1 vibration sensor? Why the measurement unit is in mm/s?
2
Can I use a 12MHz for NTSC video generation
7
Why do spectrum analyzers use envelope detectors?
0
Can I use the oscillation frequency equation for this circuit?
1
Why do we use low frequency with copper wires and high frequency with air and optical fibers?