cannot figure what is the gate for this CMOS realization

put i can't figure it's type nor pass transistor realization

This circuit has 2 binary inputs, so only 4 possible input states. That's a small enough number of states to start out by solving them exhaustively, like by using a truth table.

Start with that and see what you get, then report back.

It's good that you've noticed that sometimes the result is high impedance. Now think what that means for the internal node. Due to capacitance, the internal node will stay as it was last driven, at least for a little while.

Also note that this is really two identical gates in series, just that each is presented with the opposite polarity of CLK. This should be a clue you are looking for some kind of latch or flip-flop behavior.

Analyze what happens with the four possible combinations of input high and low, and rising and falling edge of the clock.

In other words, reduce the schematic to logic symbols and redraw.

Consider it as a finite state machine( FSM) with 2 inputs with 4 combinations and 2 transitions or edges of each input with outputs (0,1,no change)

Then change the schematic from a transistor switch to TG's and compare counts of Q's.

It simplifies to a common logic circuit and teaches you how they are actually made.

Here's another hint: How does the following circuit differ from the given one? 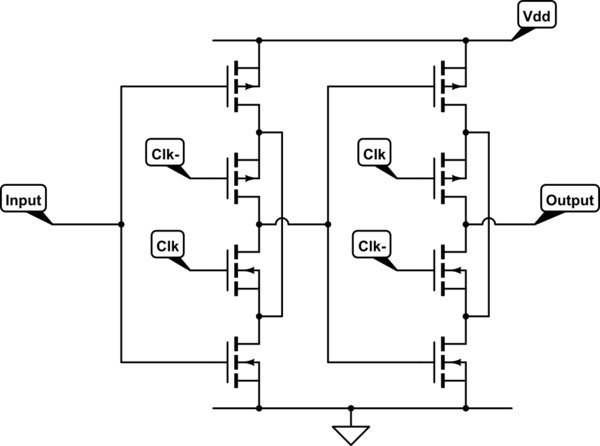 Note that both versions are examples of dynamic logic; a purely static analysis won't tell you much.

Not the answer you're looking for? Browse other questions tagged transistors digital-logic cmos vlsi or ask your own question.

1
Why does there have to be a load in MOS inverters?
1
How to connect an AND gate with a shift register
0
In a NOT gate circuit, does charge not flow through both the transistor and output line when the transistor is “on”?
0
How to build a sequential logic circuit with transistors on a breadboard
5
Level shifting in HV CMOS processes
0
AND gate output always high?
0
I don't understand why this open collector not gate needs diodes
1
P-MOSFET failures
4
How many transistors are there in a logic gate?