What would cause a watch battery to leak?

I am using a CR1220 Lithium Manganese Dioxide battery to keep a real-time clock chip running during periods when batteries are removed from a device. The battery is only connected to two pins on the RTC that are designed as battery inputs.

It appears that something (probably electrolyte) is leaking out of the battery, coating the negative terminal, and insulating it. I have seen this on at least four or five our our devices of the same design.

What could causing the batteries to leak? The spec. sheet lists the maximum battery input leakage current as 100 nA at 5.5V (we are using a 3.3V supply). Could current leaking from the supply into the battery be an issue?

[ Edit: I now see that battery data sheet says the max reverse current is 1 \$\mu\$A, so I am guessing that is not the problem ]

It is likely that your computer system is "charging" the battery when powered on and causing the problem. See (2) below.

(1) If battery charging as discussed below is not the problem then the remaining choices appear top be bad environment or excessive load. The RTC load in backup mode should be under 2 uA (1.6 uA max at 25C, 5 uA max across temperature range) according to the ISL12020M RTC datasheet that you cited. Battery capacity of the Energizer CR1220 cell that you cite should be in excess of 45 mAh at 1.8V endpoint and over 42 mAh is you use a series Schottky diode. Even using a series silicon diode such as a 1N4148 (with much lower reverse leakage than a Schottky diode) will give more than 41 mAH. I say "more than" in each case as this is based on the supplied curve at 62k ohm load or around 40 uA - so you should get usefully more capacity at around 2 uA.

5 uA at say 40 mAh = 8000 hours and the more likely < 2 uA = 20,000 hours, so the experienced corrosion problems after a few months use do not point to battery overload stress being the source of corrosion.

Which leaves environment. Are the battery holders formal ones and correct for this cell - ie are the materials compatible? Is there a corrosive atmospheric component?

You could try placing two cells in two holders loaded with say 330k ohm and 1 megohm for about 10 uA and 3 uA initial currents and place them in a sealed container with dessicant, and two more similarly loaded cells located within the equipment involved with exposure to the air.

Spraying the battery assembly with a complete but not too generous coating of polyurethane clear enamel (or a formal conformal coating of your choice) would help establish whether the corrosion came from without or within.

Does the corrosion product match the electrolyte of the cell?

What temperature ranges are being experienced.

If charging is occurring (which seems likely) options are - a different battery technology or a series Schottky diode. The diode will reduce available battery capacity relatively slightly (see calculations above) and may be acceptable but need system modification in some way. A small silicon diode would also probably be acceptable and would reduce reverse current even more.

Why will connecting a diode in series reduce the available battery capacity?

The diode reduces the available voltage by "one diode drop". As the battery voltage decreases a point will be reached where it is no longer adequate for the task. When a diode is in series with the battery feed the point of lowest useful voltage will be reached when the actual battery voltage is still one diode drop above this voltage. How much of the capacity is wasted by this loss of voltage depends on the general battery characteristics, the load minimum voltage requirement, and the shape of the battery curve at different load levels.

Two graphs from this data sheet are copies below as Fig 1A and Fig2A.
Modified versions with output voltage reduced by one diode drop are shown as Fig 1AB and Fig 2B.
I have changed the voltage by roughly 0.3 - 0.4V. A Schottky diode's voltage drop depends on current drain and diode characteristics and as small as 0.3VF to 0.4V is typical enough at low currents. Even lower may happen, but no guarantees.

Fig 2A / 2B gives a good example of the effect of adding a diode. Fig 2A is a discharge curve set with the battery alone and for FRig 2B I have offset the curves downwards by about 0.4V to simulate the drop in a series diode.

The most signmificant results will occur when a load needs a relatively high voltage that is not much less than the Vout over most of the capacity range. eg in Fig1A if the load required 2.75V minimum then an 82k load would last about 700 hours anhd a 5.6M load would last about 40,000 hours with the battery alone.
BUT with a series diode as shown, anything under 1 MOhm would not run at all and a say 5.6 MOhm load would be touch and go - ie may not run at all and may run for 10,000 + hours depending on variations in cells. 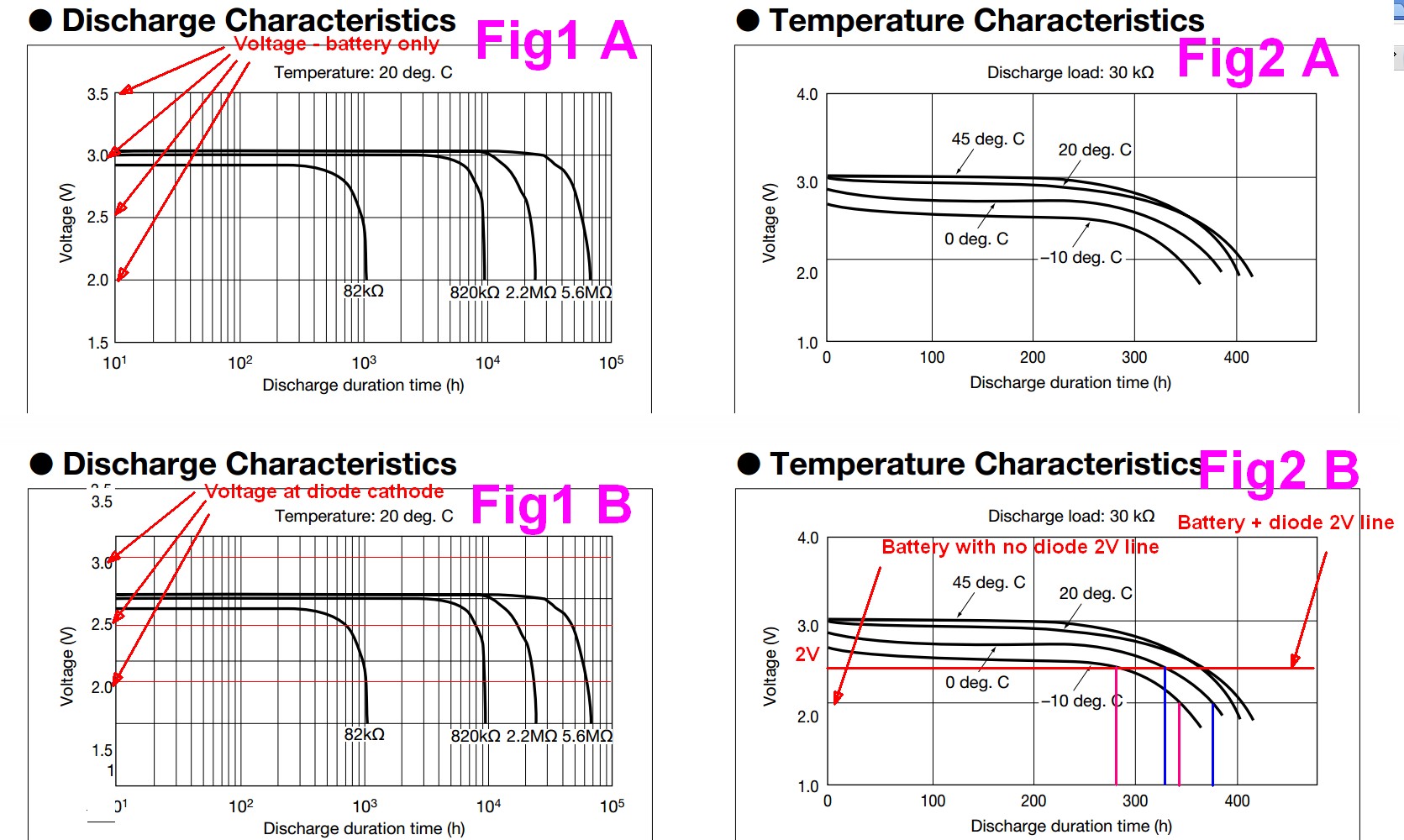 3
What makes primary batteries leak on very deep discharge?
2
When rechargable battery age, what quality decreases?
1
Would lower current cause a battery to go flat slower?
3
Using a multimeter, can I tell if a lithium-ion battery pack is brand-new?
0
What are the tradeoffs when building a modular battery pack
0
Where do I place the on/off switch in a multi voltage circuit?
1
Reverse Current leak Battery+Diode in parallel
0
Would a small scratch/puncture on a lithium battery cause power drain?