I was making a fan speed control by temperature with the Arduino.

I am dealing with this circuit: 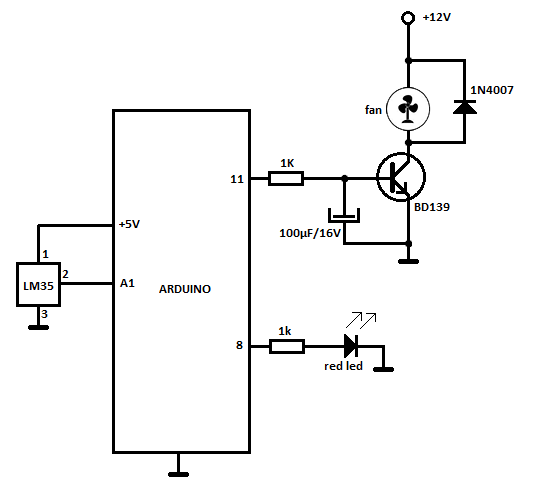 I couldn't figure out what the purpose of the 1N4007 diode is.

What is the purpose of it specifically in this circuit?

The diode prevents the NPN from blowing up when it turns off with current still flowing through the fan inductance.

The current answer is very good, I'm just adding this because it took me a long time to "get" this concept and I wanted to share the way it finally got through to me.

An inductor briefly resists changes in current across it. If the voltage supplied to the load quickly increases, the current across the load does not increase suddenly but rises more gradually. Because of the relationship between voltage and current, this means that the voltage dropped across the load is briefly high, as an initial burst of energy is absorbed by the load. If the voltage supplied to the load is dropped suddenly, the load's current does not drop straight away, as a similar burst of energy continues to be released out of the load before petering out. The voltage drop over the load therefore briefly spikes to a high negative value, with the normally negative side of the load exhibiting a large positive voltage for a short time relative to its positive side.

The issue with this is the side effects it can have on surrounding circuitry. If the negative side of the load briefly spikes in voltage that can damage a semiconductor terminal that is there, such as a transistor.

A flyback diode's regular state is that it passes no current as it's reverse biased and within its tolerated reverse voltage. But if the negative terminal is briefly positive in regard to the positive terminal, then the diode allows current flow in order to drop that positive voltage to a safe level.

6
What is is an "M7" Diode
0
diode identification help A7
0
What is this diode bridge used for in this circuit?
0
Replacing selenium rectifier diode with silicon 1N4007
2
How to choose diode?
1
Ultrafast rectifier diode: how can I calculate the maximum frequency?
10
Usage of General Purpose Diode in Series with Schottky Diode in HP 3312A
8
What is the purpose of the capacitor and diode in this fan driver circuit?