If you encounter an old text which uses tubes instead of transistors, and if you are not familiar with the tubes, which one of the transistor from the following transistor tree would you think of to understand the circuit? 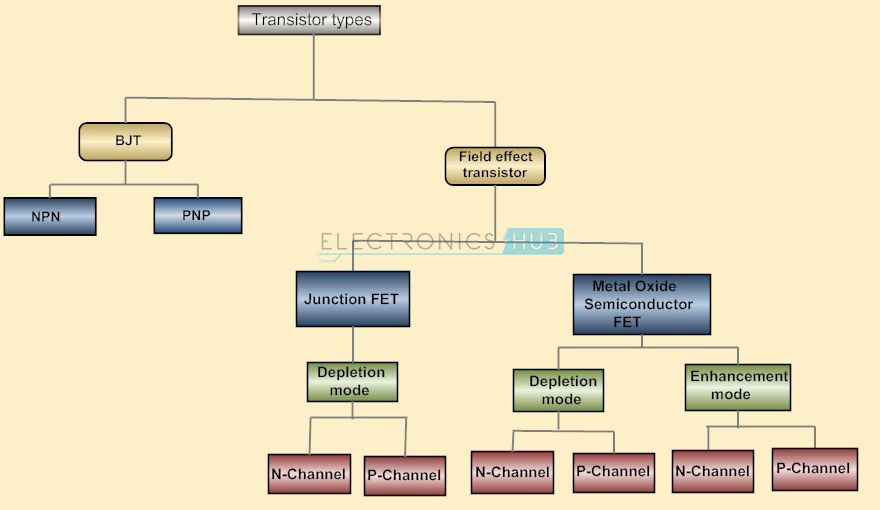 I sometimes encounter an ancient text but when I see tubes in the diagram I used to skip reading. Should I instead think of it as an NPN transistor or a particular type of MOSFET? Which particular transistor in the above tree makes most sense for a tube circuit?

None of the above. They are voltage-controlled, like FETs, but their characteristics are not so similar. Perhaps JFETs are closest, since a more negative voltage on the grid turns them 'off'.

You should just look at the I-V curves of vacuum tubes for a basic understanding.

Bipolars with high Vearly (rather flat Iout curves, for Vce > 2 volts) are good replacements for pentodes, ignoring the input base current and other biasing differences.

I wonder if IGBT’s could be adapted for good linearity. As VCCS devices they have a narrow voltage input range but a huge output voltage and current range.

For your use-case of trying to get a gross understanding of a tube circuit without understanding tubes, you can think of a vacuum tube as an N-channel JFET. This applies to circuits using either triodes or pentodes.

Note well the "circuits" part of that last sentence: the analogy only goes so far of course, and if you look at the characteristic curves, you'll see that a triode's curves look nothing like an N-channel JFET's. When put in an actual amplifying circuit however, the resulting behavior of the two is very similar. (For what it's worth on the flip side though, a pentode's curves do look very similar to a JFET's).

This correspondence actually translates to real-world uses. In vacuum tube circuit circles, it's not uncommon to use e.g. the LND150, a high-voltage N-channel depletion-mode MOSFET, as an almost drop-in solid-state replacement for a 12AX7. (A depletion-mode MOSFET can be thought of as a JFET which never draws gate current.)

The diagram is incomplete: the direct analog of the triode is the static induction transistor.

By further analogy, I suppose one could make all the other poly-odes with the same method, but a much more available equivalent would be the JFET or MOSFET, but only in terms of grid/plate characteristics.

A perfect analogy does not exist, as no devices have the same sequence of electrodes, work potentials (tendency for electrons to emit/absorb at the surface, given some energy), fields, and phenomena like secondary emission, leading to such quirks as negative resistance in the plate voltage saturation region, or enabling the phantastron oscillator circuit. Or of transport phenomena, like nonreciprocal admittance from lower grids to higher but not the other way around. (6BE6 for example, say at ~1MHz, has very small but nonzero admittance Yg1g3 (some ~µS), but not in reverse (Yg3g1 ≈ 0), and not due merely to stray interelectrode capacitance, but independent of it!).

28
How do I make the turn off and turn on time equal in a NPN transistor?
32
Darlingtons, MOSFETS, and bipolar junctions
4
Substitute a MOSFET in a motor controller
7
Photoelectric effect vacuum tube
2
I need a basic primer on interpreting vacuum tube datasheets
1
NPN vs PNP Transistor Wiring
2
What kind of transistor do I use for switching high voltage with a microcontroller?