In the circuit below the complex voltage \$u\$ should be calculated using Kirchoff's law. I know this law implies that sum of voltage should be zero. I'm trying to solve it like this but I am not sure if I aam doing correct steps: 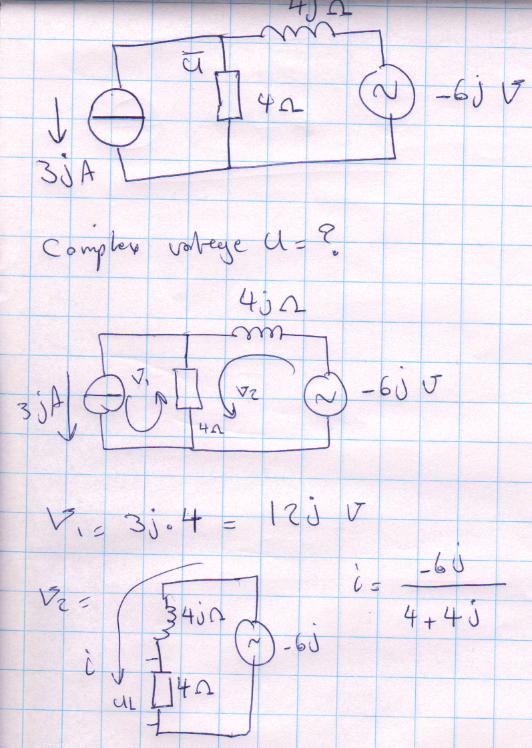 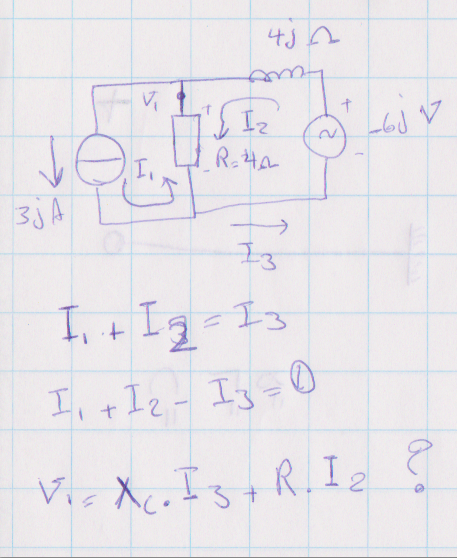 Sean, I'm afraid you need to review some basic circuit theory. The first and second pages of work reveal some serious misconceptions.

It looks like I1 and I2 are labelling mesh currents while I3 labels a branch current and then you're writing an equation involving them. When you try to do that, all you get is gibberish. Mesh current analysis involves writing KVL equations, not KCL equations.

stevenh gave a very good hint at how to proceed using node voltage analysis. [UPDATE: I see that while I was typing this, stevenh updated his answer so the rest of my answer more or less duplicates his added info.] In node voltage analysis, you pick one node to be your zero node or "ground" node. Think of it as the node you place the black lead of your voltmeter on. stevenh's suggestion to use the node that the lower end of the resistor connects to is an excellent one.

Then, you write KCL equations for each remaining unknown node voltage (where the red lead of the voltmeter goes).

To do KCL, you set the sum of the currents entering (or exiting) the node equal to zero.

I would call the lower connection of the resistor ground, and the upper V1. Now try to find V1 by applying KCL to the node (that's the sum of three currents).

edit (re your update of the question)
Your arrows suggest that you want to want to find the currents in the two loops, but that's not how KCL works. This doesn't cause anything but problems: I1 seems to be -I2 if I look at how they flow through the resistor, and I3 = I2.

KCL: you pick a node: V1. Then assign a current name to all branches that start from V1: I1 is the current source at the left, I2 is the current from V1 through the resistor to ground, and I3 is the current from V1 through the inductor and the voltage source to ground. Then I1 + I2 + I3 = 0. I1 is easy, that's given: 3j A. I2, also easy, a voltage difference over a resistor, write the equation for I2. For I3 you have two voltage sources, V1 and the -6j V source, and one impedance: the inductor. Again, write down I3 as a difference between two voltage sources divided by an impedance.

Now you have three expressions for the currents, set their sum equal to zero, and you have an equation with just one variable: V1. Calculate V1, and fill its value in the equations for I2 and I3, and you're done.

Not the answer you're looking for? Browse other questions tagged ac kirchhoffs-laws or ask your own question.

4
Finding current using Kirchoff Law, but getting unsolvable system
0
Is Faraday's Law not working?
1
Application of Kirchoff's Laws to circuit with multiple loops
1
When calculating the voltage in an AC Circuit, I get a different angle from the correct answer
0
How do you write the system of equations that solve the nodal voltages for this circuit?
0
How to apply Kirchoff laws to form differential equation for RC circuit with a variable applied 2nd voltage?
0
Circuit analysis by local application of Kirchhoff's current law and Ohm's law
0
How do superconductors avoid breaking Kirchoff's Voltage Law?
0
Will Kirchoff's voltage law work in a vacuum