I'm talking about devices for tracing hidden AC mains wires in walls like this one: https://www.ebay.com/itm/3-in-1-LCD-Wall-Detector-Stud-Center-Finder-AC-Live-Wire-Metal-Detector-Scanner-/322510160930

Is it correct that it uses capacitive coupling and can be approximated by the following circuit? 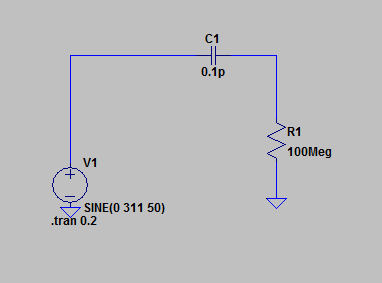 SPICE tools require a common ground between the mains side and the device side (resistance in this case) but it reality the device is isolated from the mains, so I'm not sure if this is still a valid approximation because of this.

Your ground can be anywhere, it just a reference point. So you could draw your circuit like the first one. Remember air can be modeled as resistance and the metal in the wall and in your detector will form capacitance.

One word of warning is the spice simulator may not like having a 1GΩ resistor in between it and the circuit, so the second circuit might be kinder on the solver. Its easier for the solver matrix to have more row zeroed out and makes it easier to determine a solution.

Secondly it might be a better model to put the cap in parallel with the 1GΩ resistance that simulates air, off the top of my head I'm not sure which would more closely model this situation, I'd have to run some numbers.

Any two conductors with an electric field between them can be modeled as a capacitor.

Any thing with current running through a material (even air) can be modleled as a resistor. 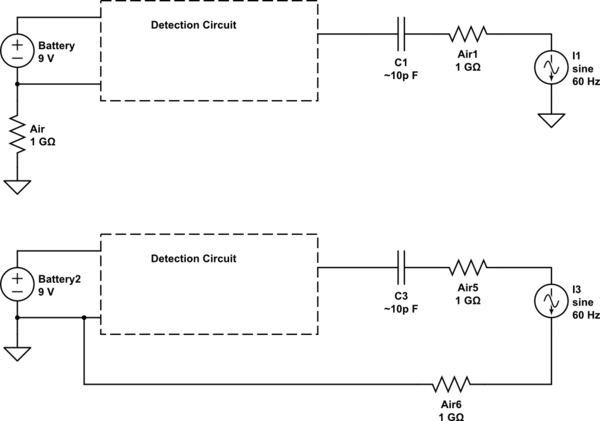 Not the answer you're looking for? Browse other questions tagged ac mains capacitive device tools or ask your own question.