I'm trying to bring up a PCB that uses an STM32F407 and LAN8720A Ethernet PHY, and I can't seem to receive any Ethernet frames — even though I have no problem transmitting frames.

The jack/magnetics are a generic part. Here's the datasheet: 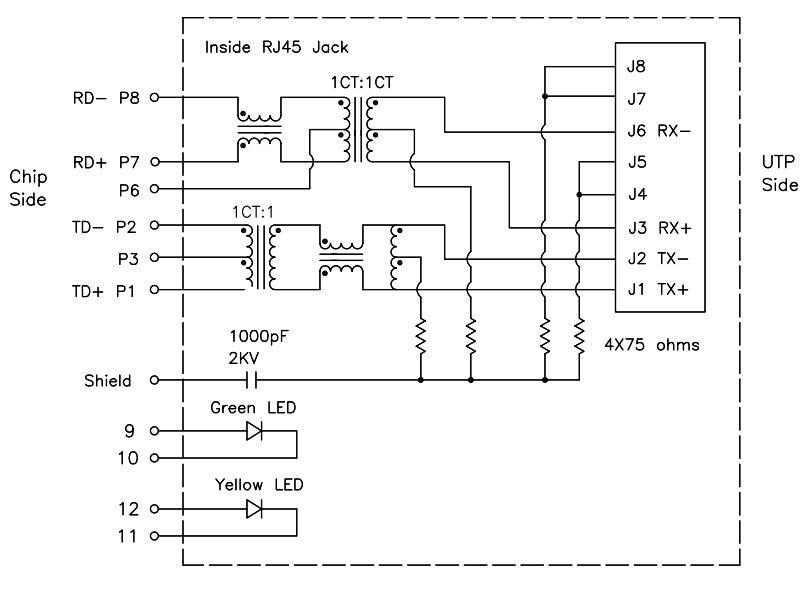 I'm using the latest-update STM32CubeMX to generate a System Workbench for STM32 project that contains FreeRTOS, lwIP, plus the ETH peripheral drivers. I haven't really touched any of the generated code — so the lwIP stack gets initialized inside a FreeRTOS stack.

Because of the no-received-frames problem, we never get past this ARP stuff: 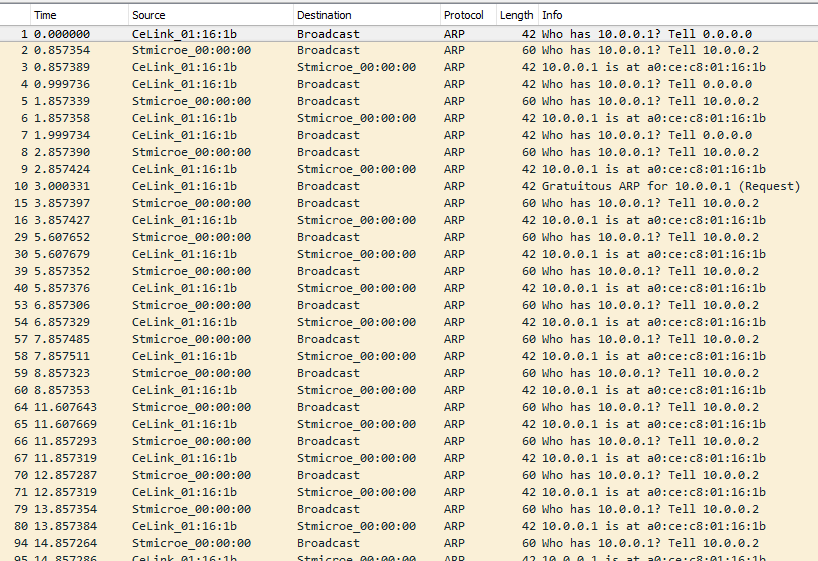 As you can see, the Stmicroe (my board) can send ARP packets — heard by my computer — but it never seems to hear the response from my computer, as it keeps blasting out ARP packets.

Both devices are configured with a 255.255.255.0 mask, and both are configured with a gateway address of 10.0.0.1 (the computer). I've heard of ARP tables getting screwed up and computers ignoring ARP packets, but I can't imagine the board would ignore ARP packets specifically addressed to it by my computer — in response to the requests the board made in the first place.

So, I dive into lwIP's ethernetif.c file and notice that HAL_ETH_GetReceivedFrame_IT(&heth) is returning an error. That function returns an error because (heth->RxDesc->Status & ETH_DMARXDESC_OWN) == 0, instead of 1. I interpret that to mean that the DMA buffers are currently armed for the MAC peripheral, and haven't received anything yet.

Furthermore, I've verified that the HAL_ETH_IRQHandler never gets called.

A problem with the PHY?

At this point, I suspected my PHY itself was to blame.

To investigate further, I attached my Saleae Logic Pro 16 to all the relevant signals, and noticed there's plenty of traffic on both the TX0/TX1, as well as the RX0/RX1 lines. Here's a capture of some RX traffic with the 25 MHz input clock: 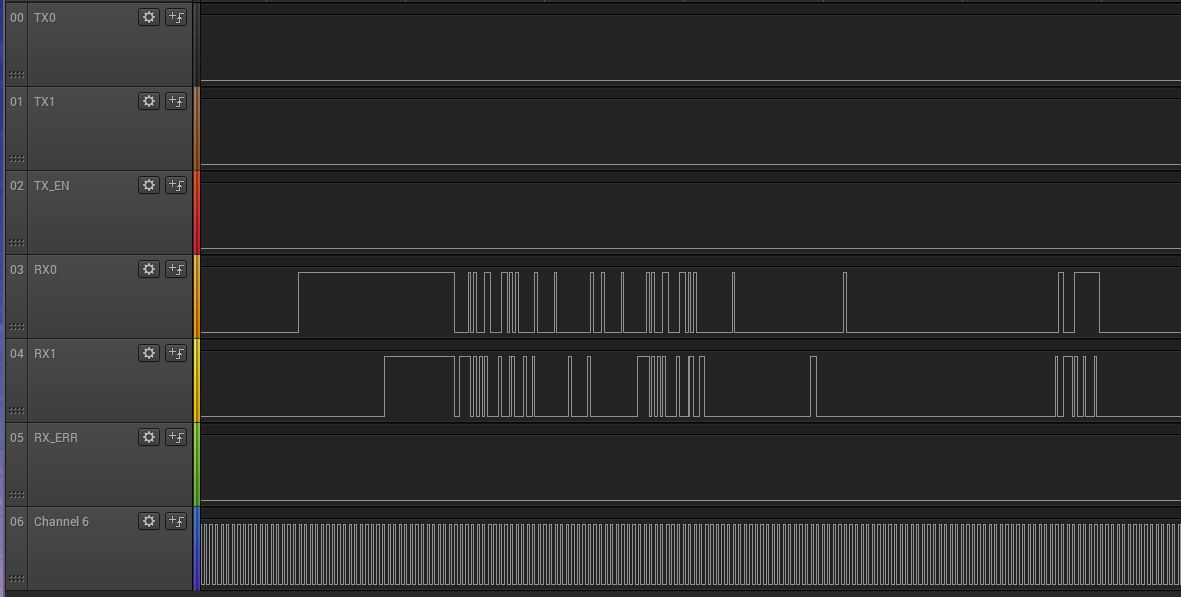 RX_ERR is low the entire time, unless I attempt to capture the 50 MHz clock output (which is obviously challenging with a device like the Saleae): in that case, RX_ERR is ocassionally blipped high for a few packets (which is actually a good sign — the pin appears to be functioning).

I've tried manually enabling ETH interrupts by calling HAL_NVIC_EnableIRQ(ETH_IRQn); after tcpip_init() is called in the MX_LWIP_Init() task, and that doesn't seem to fix the problem. I'm not entirely sure the Ethernet interrupt routine is even supposed to be getting called — that's the challenging thing with bringing up a brand new design; I'm struggling to determine what the proper behavior of the system would be, so I can then determine how my setup differs.

While I've used the STM32/STM32CubeMX/FreeRTOS stuff before, I've never used the STM32's Ethernet peripheral, and my only experience with this stuff is on custom embedded Linux systems, which always seemed to just work out of the box. This is new territory for me!

I'm sure there's a stupid checkbox somewhere or magical Ethernet_EnableReceive() function I forget to call, but I can't really find any documentation that suggests needing to explicitly enable that stuff, and the posts I'm seeing on the internet are all due to unrelated issues.

If anyone has any ideas, I'd love some help!

Addendum: Getting rid of FreeRTOS

Just to eliminate stuff, I've removed the FreeRTOS project component, going back to a bare-metal project. In my main loop, I call MX_LWIP_Process(). This method should eliminate the need for interrupts, but it doesn't fix the problem; I'm still unable to receive frames. This makes me think there's something in the ETH HAL code generated by STM32CubeMX.

Just in case someone stumbles upon this question in the future, the problem turned out to be flipped RXD0 and RXD1 pins. This is why I was able to see traffic on my logic analyzer, but it wasn't decoded by my MCU.

As someone pointed out, the magnetics I used are asymmetric, and should not be used for auto-MDI-X. I haven't had any issues. I anticipate one of two things is happening: - the magnetics don't actually work in the other orientation, but because everything I have uses auto-MDI-X, my board essentially stays fixed in the configuration that works, while the other device on the cable orients its signals to match. - the magnetics provide suitable signal integrity given the short Ethernet runs, but a long-term analysis would show higher rates of packet dropping or problems over longer runs.

Honestly, it's not clear to me why it would matter on which side of the 1:1 transformer the line filters are installed, so outside of PoE applications, I'm not sure why a symmetric vs asymmetric design would matter.

Sorry to resurrect this topic. I couldn't pass without mentioning my experience. 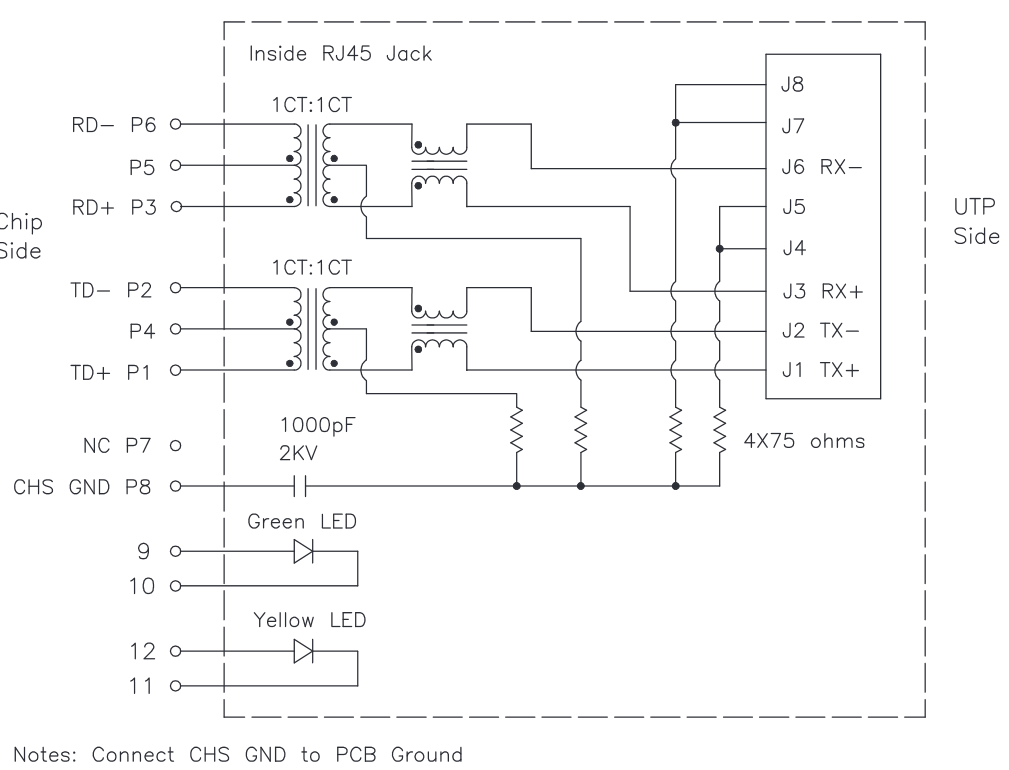 At a glance, one thing took my attention which was the connection between LAN8720 and RJ45 as per your schematic.

Since I see that the connection looks crossover. Although connected systems mostly use MDI-X and therefore detect Receive / Transmit pairs, It would be good to give it a less confusing connection like that:

You have wireshark installed on the PC, and as you say you use USB-to-LAN adapter. I am not sure at which physical point Wireshark captures packets in your setup, and thus it is a good question if outbound packets are actually appear on the physical network. I recommend you connect another PC with network interface, and see if these PCs can communicate to each other comparing output of Wiresharks on them.

Your wireshark output does not show any issues, PC announces three times that it is on local network and having IP address 10.0.0.1 (if it would receive reply to any of these 3 ARP requests then OS would pop up with IP address conflict).

Thus, as a next troubleshooting step, take another PC with "normal" Ethernet interface, install Wireshark on it, configure its networking the same way as you did for board, and try telnet 10.0.0.1 80 and see that pops up in Wiresharks on both machines. This way you would ensure that PC with its USB-to-Ethernet adapter works properly.

Your next steps will depend on things you see in these Wiresharks.

Not correct. You want to think that your board receives packets. You see there's some change in the level of the PHY input signals, but they do not necessarily represent valid packets. The fact that RX_ERR does not toggle does not immediately convince me that PHY is working properly on the incoming events, or information arriving makes up proper packets.

Anyway, it is up to you, my troubleshooting theory is simple - you must ensure at higher level where do you encounter the issue, and then dig into the respective part of the design. Digging into all the parts and suspecting everything is useless. It would be great luck if you find issue spreading the focus; you are already trying simplifying software, if it will not succeed you will most probably start replacing chips.

I do not think my troubleshooting step is so complicated to make it to ensure that another PC can communicate with PC with dongle and prove me wrong or right, and thus ensure that you are right digging into deeps suspecting board's PHY, MAC and software working on them.

Not the answer you're looking for? Browse other questions tagged stm32 freertos lan8720 lwip or ask your own question.

3
SPI Interrupt Handler delay in STM32F303?
3
STM32 SPI Peripheral bug?
2
USB on STM32F107RCT and Stm32CubeMX
5
How to debug STM32L433 Current leakage
1
LWIP Raw UDP API on STM32F2/F7 generated by CubeMX not sending on startup, requires an arbitrary amount of resets to work
2
How can I configure PHY in cubeMX on own board?
2
STM32 L4 HAL_FLASH Writes in one function but not another
0
Program STM32 MCU with SWD by default as alternate function