I have a 4-position touch dimmer that is fed with 120VAC line voltage and outputs one of four 120VAC waveforms. The output waveform is input to an electronic transformer labeled to permit "dimmed input." The electronic transformer outputs 12VAC that powers several 20-watt halogen lights. There is a small wire on the 4-position dimmer that serves as the contact point for dimming. These are commercial grade components and the set up functions without issue.

What is my problem, then? I am interested in soft-switching these lights with some sort of microcontroller and it's unclear how I would use the single-wire capacitive lead emerging from the touch dimmer with a microcontroller when there is no common ground connection. I may be making more of a project of this than is necessary, but I am sufficiently confused. I looked at other similar Stack Exchange posts, but most are starting de novo. 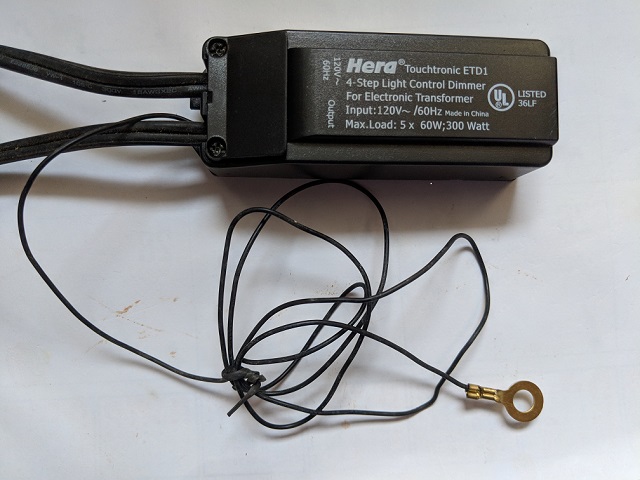 More interestingly, I am very intrigued by the three dimmed waveforms that are output from the touch dimmer. I had expected a little leakage in the "off" position (got that), but a triac-y looking waveform for the middle two waveforms and a mostly sinusoidal waveform for the "full on" final position.

The waveforms surprised me, most notably that the max voltage of the third position, 124V, is higher than the voltage of the forth, "full on", position 104V (also the V value of position 1). Visually, I can see a more area under the curve in the forth position, but I don't understand the lower voltage. 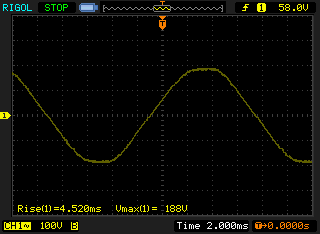 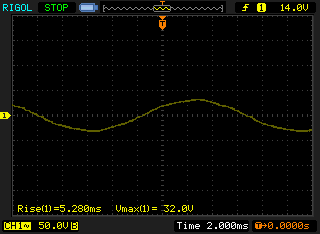 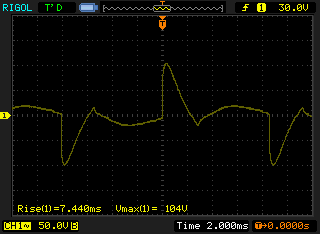 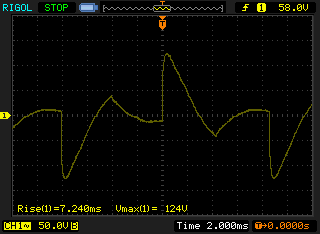 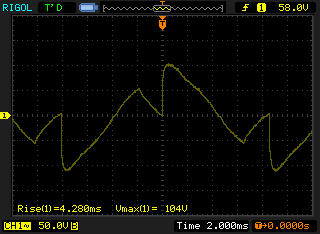 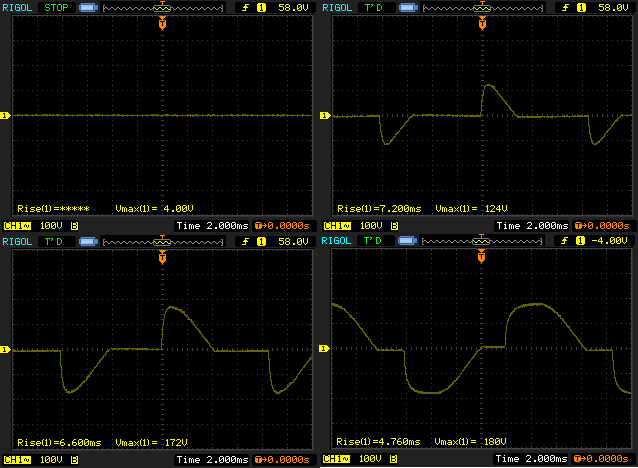 This circuit is triggered by sensing high impedance line frequency E-field levels on an extended wire with a finger touch. It probably (selects different delayed triggers for ) triac phases on the primary side of a transformer, quickly, after some detection delay.

There is no provision in the design for soft switching for slew rate phase control.

Conclusion : not possible with this unit.

When I prefer soft dimming , I use a manual dimmer triac unit and defeat the instant on/off switch mechanically with a spacer. Although that takes "so much more effort than a remote control" so grandkids tend to leave it on. There are Zigbee remote controls for LED luminaires , from Taiwan, that look pretty good as I recall.

Not the answer you're looking for? Browse other questions tagged dimming or ask your own question.