I'm flummoxed. I have 33 LEDs (17 "lagoon blue" and 16 white) wired in parallel on 22 AWG stranded stereo wire. Blue LEDs have 20 ohm resistor in series, white have 27 ohm. The circuit has a slide switch in-line and the whole thing is powered by a 3.7V Li-Ion battery.

I did this once before, no slide switch and only 21 white LEDs w/ resistors. My on/off was to unhook the battery. Worked like a charm.

In my current project the big changes are 1) 12 LEDs added 2) two different kinds of LEDs used and 3) slide switch added.

Now, when I put a protected Li-Ion battery in the circuit the LEDs only light if I insert the battery while the switch is in the ON position. Then, if I switch the circuit off, everything turns off...and when I switch it back on, nothing. I have to pull out the battery and put the switch in its on position, then reassemble for the LEDs to light. In addition, if I leave it on, two of the cyan LEDs start to turn deep blue.

If I put in the unprotected battery it will turn back on but the LEDs fade on slowly to full brightness, and the battery gets hot.

UPDATE 1/16/18 FYI this is an LED hoop. I disconnected the switch and ran straight from AW battery. LEDs still change color from cyan to blue, but sounds like that may be a separate issue with my resistor choice. Hard to fix or test that now. I wired another switch and the same issue occurred. Here is a sketch not to scale. 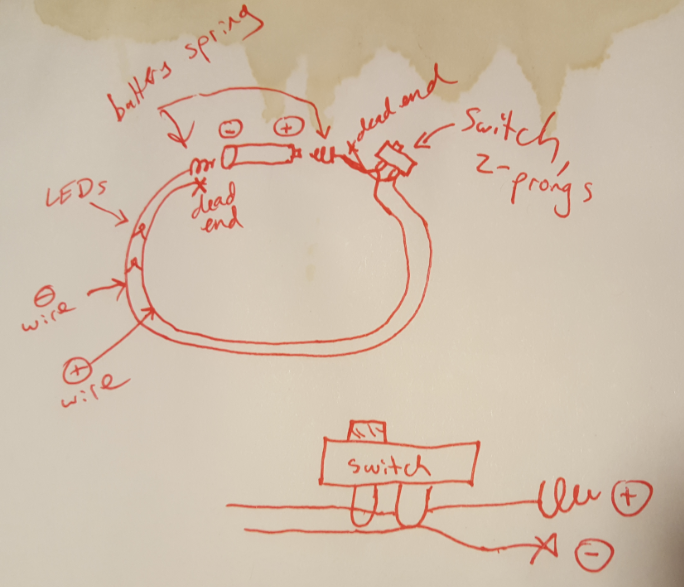 it looks like your switch is wired incorrectly. When the switch is in one position, it will short out all the LEDs and the battery, essentially sucking all the power out of the battery and away from the LEDs. In the other position it will allow the LEDs to light.

This is not the correct way to wire a switch and you are lucky your battery hasn't exploded or something.

With this configuration I would expect the battery to get very hot whenever the switch is "off"; does this match your observations?

The switch should be wired in series, in between the battery and the LEDs.

If the LiPo is getting hot , I imagine some of the LED's are getting hotter due to missing series R's or wrong values.

Ahem... In theory you can add as many LED's as you want, but you MUST add or increase the resistor in series with each LED. 27 ohms sounds good for starters. Beg, borrow or buy a DVM so you can see the current drain from the battery vs. its amp/hour rating. The total current should not exceed 10% of the amp/hour rating, and that lets the LEDs run for ten hours.

LEDs are very efficient so do not be afraid to double the resistor value in series with the LED. They are non-linear devices so that should dim them only slightly, yet save much current drain on the battery.

Be sensible about the total number of LEDs used. The more you add the dimmer each of them will become as you are forced to increase the resistor values. Red LEDs have the lowest turn-on voltage so use a 33 ohm resistor as a minimum.

Thanks to @TonyStewart for doing the basic math, which shows you are already reaching the batteries limit. Double the resistor values, then check the battery to see if it cools off. I personally would remove some of the extra LEDs, or at least NOT add any more.

A very hot Li-Ion battery is like a small bomb, so go easy on it.

Not the answer you're looking for? Browse other questions tagged led circuit-design lithium-ion or ask your own question.

2
Getting LEDs brighter without drawing much more current
2
Toggle battery powered LEDs
1
Request for guidance on sources to help me figure out how to do simple thing
0
Get Li-Ion battery capacity from discharge time (constant load)
2
Circuit with 10 LEDs with 9V battery
0
TP4056 and li ion battery charging that never ends
1
Can I drive several LEDs using a Li-Ion charging chip
0
Can I put my battery in the middle of my parallel circuit?