Can I use 2 Power Supplies in series like this?

I just started doing electrical engineering as a hobby.

I want to build a circuit where a Micro-controller controls 300 LEDs. Those LEDs can draw a lot of power, so I use a larger power supply, which is quite inefficient when idling (3Watt Standby). This matters because the LEDs won't be on all the time. I will implement some kind of sensor which fires when I want light (like a button, human detection IR sensor, Bluetooth, ... ) and my idea was to use a second, more efficient power supply, which can power the controller as well as all sensors, but has not enough power for the LEDs. As soon the sensor fires, the micro-controller will activate a relay to activate the large power supply.

I am not quite sure if it is safe to use this layout, however, because I heard that you should not connect 2 power supplies in series. The LEDs get a DATA signal from my Micro-controller (which is on the efficient PS) while the LED is on the large PS.

I made a quick draft. Keep it in mind that I am no expert, so I might have made some errors. 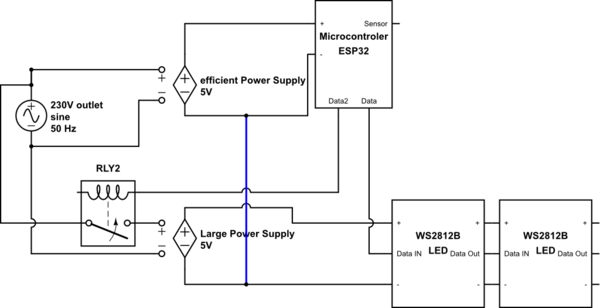 Edit1: I added a big blue wire connecting both grounds together like many suggested

The power supplies you have illustrated are actually connected in parallel. This setup should be totally fine, and is in fact the defacto method of connecting circuits to the mains.

Consider how you may have multiple 5 V supplies plugged into a power strip. Each of these supplies would be connected to the same 2 nodes, live and neutral, and are therefore in parallel. They then convert the mains supply into the required format, in this case 5V.

Edit: here is an equivalent circuit you could use to visualise the connections. The two power supplies are referenced from the same ground node and should cause no problem to each other. 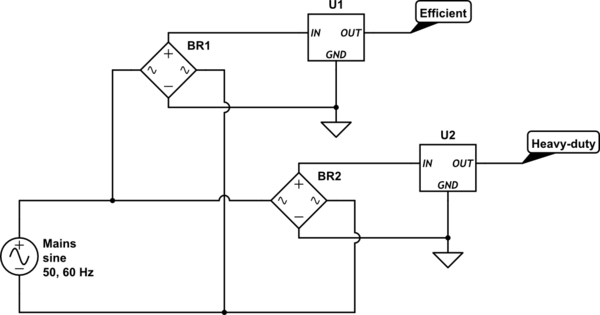