Why is Embedded Strictly C/C++ [closed]

Ask Question
Asked 7 years, 6 months ago
Active 6 years, 11 months ago
Viewed 3k times
15
\$\begingroup\$
As it currently stands, this question is not a good fit for our Q&A format. We expect answers to be supported by facts, references, or expertise, but this question will likely solicit debate, arguments, polling, or extended discussion. If you feel that this question can be improved and possibly reopened, visit the help center for guidance.
Closed 7 years ago.

I didn't like this question since it can't be easily answered but perhaps I can rephrase: "What keeps Embedded from changing languages?"

For instance, we pretty much see C/C++ for embedded (I think i've heard ADA mentioned before too? correct me if Im wrong)

But what exactly keeps the Embedded world from changing languages? Is it just that C is too easy to use or there just isn't really a "need" for a change since C does everything fine?

This has always kinda baffled me, not that im complaining. Since keeping it to a few languages keeps things standardized. But still the question remains.

I realize this is sort of a Subjective question, however My main Question is "Why" and not "IF/WHEN"

First of all: forget about "embedded" as that is not a useful distinction. The all-important property is "resource-constrained". The most important resource is often time, in which case we talk about real-time systems, but it can also be memory or power.

With 8 and 16-bit microcontrollers based embedded systems, it comes down to it is easier to develop software that can fit into the limited resources of these very modest storage limitations (maybe a few 100 bytes of RAM for low-end 8-bit microcontrollers, with 2-8 KiB of ROM or EPROM/Flash for code storage).

In those cases small languages like C or assembly tend to be the most commonly used development languages. As a very rough relative comparison, a complete assembler and C99 compiler can fit onto a single floppy disk, while you need several MiB for a modern C++ development system (with STL, etc.).

When you are looking at higher end micros (high-end 16-bit, and mostly 32-bit, with fairly rare 64-bit) and DSP in embedded environments then the restrictions weaken, and software development may make up the bulk of the development effort, so it makes sense to use the most productive development tools, including more advanced languages with features like Object-Oriented Programming (OOP) languages such as C++, and newer languages (Java, Perl, Ruby, Python).

It is possible in assembly and C to predict how much memory is being used, so that a space constrainted design is feasible, but advanced features such as templates, exception handling, and run-time binding make it impossible to exactly know the necessary memory footprint for a standard C++ program in advance. I don't know enough about MISRA C++, which is a subset of C++, to comment on it.

Languages based upon virtual machines running byte-code (Java, Perl, Python) are less mature in the embedded developer's experience, and as these languages are designed to insulate the programmer from the particular hardware, it also makes it more difficult to be conscience of such embedded hardware system's limitations and restrictions. These is less of an issue with fast 32-bit processors (e.g. ARMv7) with MiB if not GiB of RAM.

All the BASIC implementations that I'm aware of are quite simplistic in the language features, remaining largely true to the legacy of Dartmouth BASIC from the 1960s. This means that the language doesn't have any complex run-time libraries or exception handling, and an interpreter or compiler is fairly simple to write and is small in file size as well. Most microcontrollers have at least one BASIC compiler available for it.

I hope that outlines in broad strokes the reasons you'll find C and assembly primarily used on smaller or older embedded systems, and with the limitations of newer mid to high-end embedded systems differ only slightly from a traditional desktop personal computer.

Most of the answers already stated the historical reasons (well known, everyone uses it, would not be easy to change the habits, etc). While I agree with them, we should keep in mind that there is another important reason.

It's not that "C is a bad or outdated choice but we still use it out of habit" (like the QWERTY keyboards).

C is on itself a very good choice for embedded development, especially in time-critical applications. Why?

So, C is the best (or one of the best) compromise between the speed and direct hardware access of Assembly, and the easy reading and understanding of high level languages.

It's exactly the same reason why in regular programming the (most used) languages don't (really) change:

In the embedded world, it can be a lot harder (or impossible) to provide software updates, and so it is all the more critical to guarantee correctness. Sadly C provides very little help in this regard, and allows the programmer to play fast and loose.

It pains me to use C for embedded systems, and wish I could at least move up to C++ for the many benefits it provides in the form of constraints like const, references, stringer typing, etc.

I guess the answer is simply that we're stuck with C because changing is not commercially viable. Everybody knows C, there are loads of compilers for it, libraries for it and tools to generate it. With a new language, we'd be starting from scratch.

I guess that's why people still use PHP. 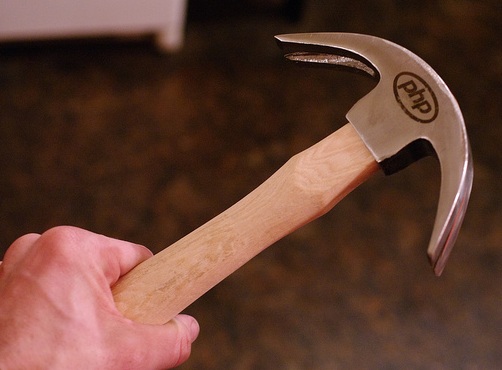 Has no one here heard of SPARK Ada ?

This is a "small" version of Ada language and related development tools for embedded systems, e.g. avionics and other safety-critical applications like medical equipment.

Studies have show just a 5-10% loss in processing speed compared to C/C++ with the more reliable SPARK coding.

I think that the proliferation of C in embedded systems is due to economic reasons :

So, @ Wouter, you need not worry about dying in the skies for want of Ada embedded code !

It's already in the airplane systems for many years. Likewise for your pacemaker.

But for the dishwasher, the building services control system, the lab furnace controller and other not so strictly regulated arenas -- is it economically worth going the extra mile ?

I guess that the main reason for C's popularity is that first: C is popular and many people know it and second: None of the new popular languages like Java, C# and even many aspects of C++ are suitable for embedded work. Basically the 3 other languages I mentioned rely a lot on dynamic memory, which brings non-deterministic execution of program with it, objects, which bring dynamic memory with them, large memory requirements (since one of the more important sides of OO is usage of larger number of classes), the increasing popularity of just in time compiling (and many embedded platforms can't even compile their own C code at all)...

There's also the fact that many of the libraries which ship with say Java or C# are useless for large number of embedded projects.

On the other hand, we have older languages like Pascal or Basic. From my point of view, they aren't as popular because C made itself the "industry standard" language and very large number of programmers and engineers learn C today. In some schools Pascal or Basic aren't even learned. There's also the fact that many languages today popular have C-like syntax and using Pascal would feel strange to a C programmer.

As for FORTRAN, well I guess that it went into a niche field and is mostly used by engineers and scientists working in areas where there is a suitable ecosystem for its use. I don't see any particular reason (other than those I mentioned for Pascal and Basic) it isn't used on embedded systems.

Do note that in this answer I focused mostly on smaller systems. There are also many embedded devices which use more complex operating systems such as GNU/Linux or some other Unix derivative and for programming them, more or less any popualr language can be used.

C is a very simple language, and has been on more than one occasion referred to as fancy assembly language. It is very nearly the minimum amount of abstraction you can provide above assembly code, as the C constructs map fairly directly onto machine-level constructs.

For this and several other reasons, it is very easy to implement a C compiler on a new chip. Much of the work is already done, there's comparatively little complexity or things to go wrong, and the low-level control allows you to fairly easily handle whatever quirks your hardware has.

C++ can be (actually originally was) implemented as a source-code translation layer on top of C, meaning you get C++ (or at least some version of it) for free with your C compiler.

With C and C++, you an bootstrap pretty much everything else you need for your new chip, making it the logical place to start.

Some reasons the others haven't mentioned:

I think that is because C/C++ are the lowest level, high level languages.

In fact, for small embedded systems C is much more popular than C++. And the reason for that is the same as for not using other languages. C++ requires a runtime, unless you give away most of the features that make it different from C.

Apart from assembly, C is the only language I know that compiles to native code and for which having a runtime is optional. So it is guaranteed to be the smallest footprint and fastest execution time in a restricted environment (except if you use assembly).

On the other hand, in medium and large embedded systems (by which I mean more memory and clock, bigger word size) I wouldn't say C (or C++) is so prevalent. I've seen systems supporting Python, Forth... even Java.

But of course you almost always have the option of using C/C++, obviously, for the same reasons I mentioned above. And having the option, and being you someone that already is comfortable with C for small-embedded, why would you choose another language?