Explain why the NodeMCU auto-program circuit would be useful

I'm looking at the NodeMCU "auto-program" circuit but could not understand why it is there at all. 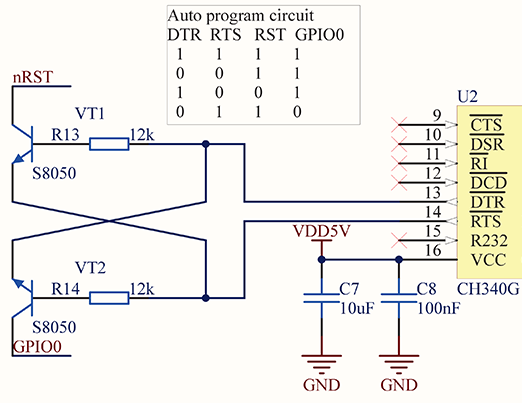 From my point of view, this circuit enables open-collector outputs, but makes programming dependent on the time between switching the DTR and RTS pins being smaller than the ESP goes from reset to sampling the GPIO0 level.

Another reason I could imagine was to avoid invalid startup/connection resets, but I can't see why proper pulling couldn't fix this.

Is there any reasoning I couldn't see from my analysis? Why isn't DTR/CTS connected directly with one transistor on each line? Why controlling each line directly (and thus allowing to switch GPIO0 low before resetting without glitches) wouldn't be better?

EDIT: while the question is about the same structure shown in Is this a flip-flop?, I understand it's function and know it's not a flip-flop (no need to redraw it). What I'd like to do is know why was it chosen instead of a much simpler open collector configuration like the one below, specially since this one doesn't generate a glitch in the transition between the two programming states (from reset to/from GPIO0=0). 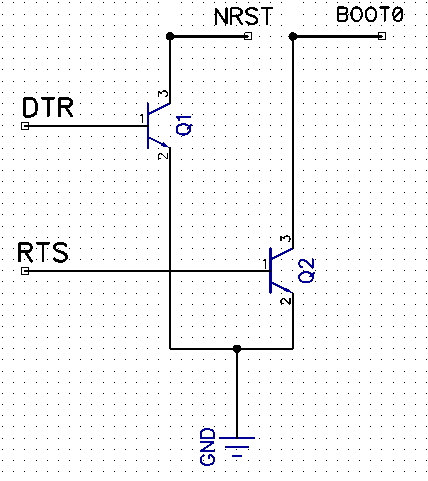 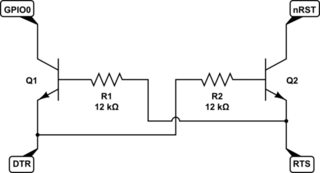 An advantage here is that the external controlling device can choose to set both DTR and RTS to LO in order to decouple itself from the target device's I/O lines. (Setting them both to HI could lead to a problem where there is conduction via the base-collector diode.) This frees up the I/O lines on the target device for other circuitry to be added for target device purposes not related to being reset.

Note added on 8/14/2020: The above was entirely written before the OP's EDIT was added. None of it applies to that addition. (Now that I'm looking, today, I've no idea why the OP thinks that the "simpler" circuit is a good design or even safe to use.)

This question doesn't seem to be fully answered, so I'll take a stab at it.

I can't say what was on WeMos's mind when they designed it, but the difference between their circuit and your redrawn alternative is that the original one only asserts NRST or BOOT0 (or EN/GPIO2) when both RTS and DTR are being controlled in opposite of each other.

Some cursory searching seems to imply that there is no standard "default" state for DTR/RTS to be set. Or at the very least, it's not consistently adhered to by manufacturers. With the existing WeMos circuit, one has to be active and intentionally controlling those lines to have an effect, so your device won't just reset when you plug into a host that is allowing RTS/DTR to reset at an improper state.

I would like to answer this part of the question:

What I'd like to do is know why was it chosen instead of a much simpler open collector configuration like the one below, specially since this one doesn't generate a glitch in the transition between the two programming states (from reset to/from GPIO0=0).

NodeMCU was designed to be compatible with the Arduino IDE. The Arduino IDE has a built-in programmer. That programmer was originally made for Arduino MCUs, and they have a specific wiring that requires both DTR and RTS lines pulled high/low at the same time to put the device into flashing/programming mode. ESP8266 and ESP32 chips are a bit different. You can read more about that here: https://cdn.sparkfun.com/datasheets/IoT/esp32_datasheet_en.pdf in section 2.4 "strapping pins". Most importantly, if you want to flash the device, then you cannot keep both lines high at the same time for a long time.

Some programming tools that are specific to ESP chips work out of the box, without the "cross bjt" circuit. For example, look at the reset code of esptool:

There you can see various line state changes and delays that are used to properly reset the chip. If you use such tools, then you can connect GPIO0 to DTR and RST to RTS (well, only if you have a 3.3V USB to serial converter!)

NodeMCU however, was created with compatibility in mind. You can use the Arduino IDE and Arduino (basically, the C language) the write programs, and flash them to the device from within the Arduino IDE, and you can also program it with esptool. It works either way.

If you are designing a custom PCB then you can save some costs by leaving out this "cross bjt" schematic - but then you must use the right tools to do the flashing.

Not the answer you're looking for? Browse other questions tagged serial esp8266 programmer nodemcu or ask your own question.

0
Arduino Time.h - Resets on Serial Connection for Sync
8
How can a USB-RS232 converter manually assert its TX pin?
0
usbasp with avrdude: error: program enable: target doesn't answer. 1
0
ESP8266 Getting Unstable with the following circuit
0
Serial Port communication to PC troubleshooting
4
What ESP32 UART Auto-Program Circuit Alternatives are there?
0
Sending multiple data between the two NodeMCU using Serial communication
1
Understanding what exactly is the NodeMCU
1
Programing the ESP32 with FTDI cable