Acceleration when device is on tilt 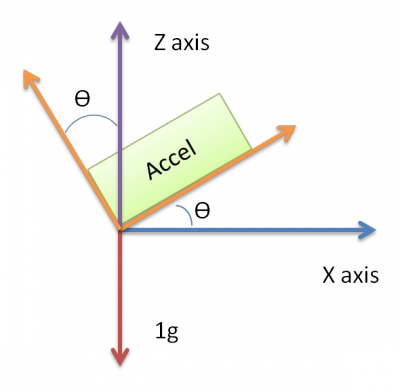 X and Y -Axis produce 0g and the Z axis is 1g when device has no tilt and is on flat surface. The tilt causes the reading of X axis to go towards 1g if tilting is towards up and to -1g when downwards. The +-1g is reached when the device is on 90* degree from original position

I have been thinking my head off how to eliminate that acceleration that tilt causes and only measure the real acceleration of the device but just can't think way out from this problem with the following data that i can produce.

Basically i think that if i could only measure the X axis acceleration (picture) even if the sensor is in tilt like in picture.

Hopefully this message isn't too hard too understand because of my english skills and the way I'm trying to explain my problem.

Only a sketch of a solution.

Take all 3 axes into consideration.

Acceleration due to gravity, regardless of tilt, will always be 1G, as a vector sum of X,Y,Z, no matter what the tilt. You can picture the acceleration at rest or steady motion as a point on a sphere with radius 1G. (If you are perfectly horizontal, that point will be (0, 0, -1) i.e. directly below you).

Acceleration due to braking will distort the sphere itself; the vector sum of X,Y,Z will no longer be 1G.

You now have to find the true acceleration which will normally be a vector in the forward (or rearward) direction which explains the difference between \$A\$ and G. You need to subtract some point on the G sphere from \$A\$, to find a (hopefully unique solution) vector with only an X (forward/backward) component. That is your acceleration. (I'll leave the trigonometry as a simple puzzle, hopefully the idea is clear).

Unless you are also turning or skidding, so you need inputs from steering wheel and ABS to be sure; that becomes a data fusion problem. This approach will provide an estimate of acceleration. To sanity-check and refine that estimate, combine it with other (also unreliable) data sources, as in Phil Frost's answer, using a Kalman filter.

Your main mistake is in not treating acceleration as a single vector. When the car is at rest, that vector will always be 1 g upwards. Don't look at just the X component of the raw accelerometer data. Do the real vector math.

But my problem is that when the device is on tilt (0g when no tilt) the acceleration is between (downward) 0g->-1g or between (upwards) 0g-> 1g.

No. This is the point. What you are saying may be true for the X component of the accelerometer output, but it is not true for acceleration when the car is at rest.

Note that there is considerable error in such readings, especially from cheap MEMS sensors. While you should be able to get a good idea about short term events like hard acceleration or hard braking, this data is nowhere near good enough to do inertial navigation for more than a few seconds at best.

For best accuracy you can't assume gravity is always "down" relative to the accelerometer. For example, the car may be on a hill. All your calculations must be done with three dimensional vector math, and you must have some estimate of the orientation of the car so you know the direction of the gravity vector to subtract.

A Kalman filter is a common approach here. The idea is to take all the data you have which might alter the orientation of the car, then perform a weighted average of the measurements, combine that with what you know about the physics acting on the car, to arrive at a probabilistic estimate of the new orientation of the car and which way is "down".

For example, if you have a gyro and you measure the car pitching up, you can predict the gravity vector is going to rotate towards the rear of the car. Over the short term, say when the car has just begun going up a hill, this can help the gravity vector rapidly assume the correct orientation.

You might also assume the car will on average not be braking or accelerating. Thus, a low-pass filtered output of the accelerometer might feed into the estimation of what direction "down" is. This provides a long-term measurement not subject to inertial drift.

Combining data from the accelerometer and gyroscope to estimate the gravity direction thus provides a more accurate estimation than either measurement alone.

You can further incorporate what you know of the possible operational envelope of the vehicle. For example the car can not drive up or down hills that are too steep, so when the accelerometer indicates such extreme angles you might weight it less, assuming most of its output is due to brakes or engine, not gravity.

You know if the driver hits the brakes, this is going to move the acceleration vector, and you can subtract this from the estimated "down" component.

If you have data on fuel consumption and speed, knowing that more fuel is consumed when going uphill, you might use this to estimate the car is pitched up or down based on fuel efficiency.

And so on. The more you know, the better your estimate can be.

You would need a fusion algorithm and use 3D-accelerometer, 3D-Gyro and 3D-Magnetic sensors. With this fusion algorithm you get the attitude, the earth gravity helps as reference to detect the horizon - pitch/yaw/roll angles. The other two sensors mag/gyro helps to filter out the dynamic movement. As you car will also turn left/right,..the centrifugal force will be added. Once you have the attitude, then you can subtract the gravitational vector and disassemble the resultant acceleration in all three axes.

As a very basic approach, you can use a high-pass filter to eliminate the constant part of the acceleration (which corresponds to gravity) and keep the variable part of which is due to car dynamics. Suppose raw is a vector containing your X, Y and Z measurements, and acc is the car acceleration without gravity. Then

Individual components of acc are still affected by tilt, but the vector norm isn't:

Of course, this method is not very precise, especially if the tilt changes at a high rate. This is about as far as naive math gets you. If you need better precision, learn how to use a Kalman filter.

The answer lies in the precise definition of "slowing down".

The device will located in a car and should measure acceleration when car is slowing down (brake).

However, slowing down does not equal braking. There are two possible definitions:

It turns out that detecting 1. is significantly more difficult than 2. Let's define axes as relative to the car orientation: X: front-back direction, Y: left-right direction, Z: up-down direction. All axes aligned to car.

It seems that you are using an "overkill" device for your application. You should use a device that only measure x & y acceleration, this way, the tilt will have no measurable effect. Although the total acceleration may be smaller or larger, due to the tilt, the device will measure only the x & y components of the acceleration on the plane the vehicle is on.

Not the answer you're looking for? Browse other questions tagged accelerometer math physics gyroscope magnetometer or ask your own question.