Alternatives to SPI because of EMI

I currently make a system consisting of a plastic enclosure which contains an MCU talking to 7 ADCs using 2MHz SPI over wires about 5cm long. 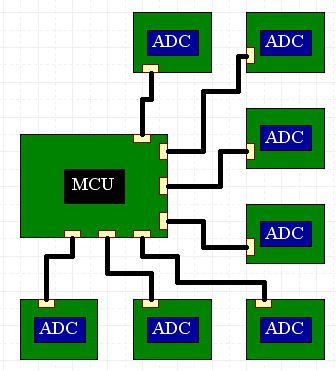 The problem is that I'm concerned about EMI. Everything I have read suggests that any kind of digital signal that's not safely on a PCB in a grounded metal chassis will radiate too much to pass EMI testing. I guess this would include I2C as well.

Is this likely to fail EMI testing? What can I do about this?

I am looking for any kind of answers, including "Use a different bus / ADC", but not including answers that involve mechanical changes like: "Put all the ADCs on the same PCB" or "Put the whole thing in a metal box". I am especially interested in Low-EMI alternatives to SPI including differential buses.

Here is some relevant information about the application. Please let me know if you need to know more things:

Just to give an idea of the space constraints: 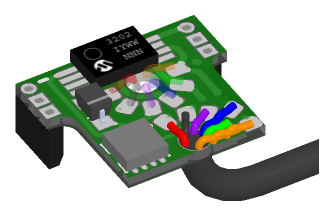 Here you can see one of the ADC PCBs. This one actually has an MCP3202 instead of an MCP3208, but it's compatible(ish). It's in a TSSOP 8 package. The PCB is 11mm x 13mm. The black cable is 2mm diameter. As you can see, there isn't even space for a connector and the wires are soldered directly to the PCB, then potted. The lack of connector is due to surrounding space constraints rather than PCB space constraints.

2 MHz SPI over 5 cm cables is not huge. I do 30 MHz SPI over 10 cm cables a lot, passing FCC Class B and the CE equivalent. The key is to make sure that you have a good cable (controlling as best you can for loop area), and properly terminating your signals.

Properly terminating the signals is going to be a little tricky since you don't have a controlled impedance on your cable. What I would do is to put an RC filter on the PCB at both ends of the cable. The RC filter would have the C on the cable side and the R on the chip side. At the signal driver, I would start with an R of about 75 ohms and a C of about 1 nF. At the receiver, the R would be about 10 ohms and C still 1 nF. Once you have the prototypes built then you should try different values. Essentially you want higher values for R and C, but not so high that the thing stops working or the signal levels are too attenuated. The edges of your signals should look very rounded off, but there should be no ringing and the clocks should be nice while in the signal transition band (usually 0.8 to 2.0 volts).

A cap value of at least 3 nF is ideal for ESD protection, but that might not be an issue in your application.

CAN is almost certainly your best bet in this sort of application. It's differential, and should actually reduce the number of wires going to each board. If you're sampling seven chips, eight channels per chip, twelve bits per channel, that's 672 bits of data per sample time. At 1 kHz samples, 1 Mbit transfer rate, that's 1000 bits per sample time. That doesn't leave you much room for overhead, so you might consider using a microcontroller that has two separate CANbus controllers built in. (Microchip makes several, I use the dsPIC 30F6012a.) Divide your A/Ds into two busses, with your central microcontroller on both, and you should have plenty of bandwidth.

On the other end, you might consider replacing the A/D converters with microcontrollers. dsPIC 30F4013 might be a good choice there. 13 12-bit A/D channels, plus CANbus.

Alternately, I think you can convert SPI to/from differential voltage protocols like RS-485. But I wouldn't know enough about that to comment intelligently.

Not the answer you're looking for? Browse other questions tagged spi wire emc or ask your own question.

52
Is a CAN enabled microcontroller sufficient to drive a CAN bus?
8
Designing my own Bus