I am trying to understand this circuit but as of yet I still have a number of gaps in my reasoning. So far I have deduced:

These are my gaps in reasoning:

thank you for your help!

Just for review, let's start with the following schematic. There are two BJT sections, with their outputs coupled to the opposite section's input via a resistor: 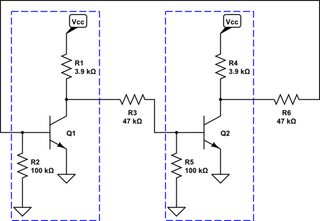 In effect, each section is an inverter with a weak pull-down at the input. As connected, the circuit is bistable in the sense that if the left stage's input is taken as LOW, then its output is HIGH and forms the input for the right stage. Since the right stage has a HIGH input, it's output is LOW. This matches up with our assumption, so it is stable. We can work through the opposite logic and arrive at opposite but stable results. So while we cannot say which stable circumstance actually happens, we can say that it appears on the surface that some stable condition will result.

Slight variations in components and parasitics will probably determine which of the two stable situations results, if this were placed on a protoboard or otherwise wired up. But it should be fine.

On a more quantitative level, we can see that the voltage value of a LOW at the input of a stage will be about \$\frac{2}{3}V_{CE_{SAT}}\$. That will usually be \$\lt 200\:\text{mV}\$ with a series impedance of about \$32\:\text{k}\Omega\$. While not exactly reverse-biasing, this really should be low enough in order to keep the following BJT essentially "OFF". (There might be a tiny residual collector current enabled by this setup, but not enough to develop any meaningful voltage drop across its collector resistor.)

Now, let's keep the above circuit in place and add in the new components: 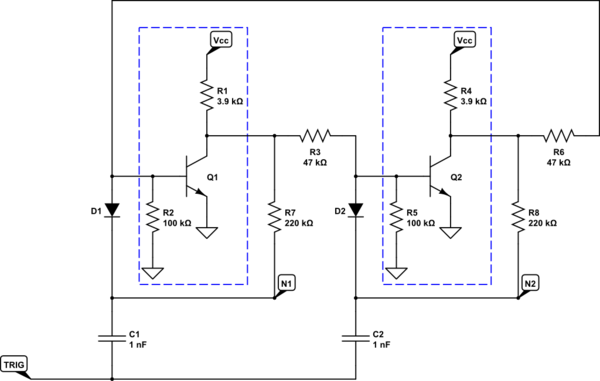 (As your question suggests, the trigger signal is the low-going edge.)

What's been added, and why?

Well, both inputs have been coupled to the trigger pulse via a capacitor and diode. Start by thinking about the original circuit.

We don't know the quiescent voltage at the trigger input, but let's call it \$V_{HI}\$ for now. (It will be low-going to some new voltage called \$V_{LO}\$ later to trigger an event.) Note that these two voltages are both taken with respect to the circuit ground and that, for example, it may be the case that \$V_{HI}=V_{CC}\$ and \$V_{LO}=0\:\text{V}\$. But let's assume we don't need to know for sure, just yet, and allow these two voltages to be any two voltages with respect to ground but only where we require that \$V_{HI}\gt V_{LO}\$.

Now, a trigger event occurs by causing \$V_{HI}\$ to go downward towards \$V_{LO}\$. The shared capacitor node is pulled hard down to \$V_{TRIG^+}=V_{LO}\$. This causes the other side of each capacitor to suddenly also be pulled down, too.

The before and after voltages are:

It's not too hard to see that \$D_1\$ will not be sufficiently biased to much affect the left stage. However, it's also now clear that now \$D_2\$ will be forward-biased. And very strongly so.

That's about it. After the state change the roles are reversed and the above logic applies, but oppositely for the left and right stages.

The need for the two resistors occurs because while one of the stages might also have a diode through which its capacitor can charge the other one's diode can't serve that purpose. There needs to always be some DC path by which the capacitors can charge.

One thing that might arrive (and I think your question might also be asking) is that there will be a strong pull-down for one of the BJTs, during switching. This pull-down can possibly exceed the \$V_{BEO}\$ specification for the BJT, depending on your value for \$V_{CC}\$, causing it to zener. It might be useful to include a protection diode to cover that case when \$V_{CC}\gt V_{BEO}\$.

The above rules aren't hard and fast. But if you struggle to follow them, you'll find that it does help a lot. (Even if you know almost nothing about electronics beforehand.)

Note that in the way I drew out the first schematic here, I teased apart what otherwise looked like a single, tightly connected circuit into two distinct sections (inverter stages) that were connect to each other via a very simple resistor.

The 220K and the 1nf set up a time constant. When one rc branch charges, the other discharges, because of the type of bias, this causes a one cycle condition of on and off. This is a basic Set-Reset flip flop. See the author's page (where that schematic originated) : http://www.electronics-tutorials.ws/waveforms/bistable.html and if you need more of a breakdown of the circuit (formulas, etc) you need to ask that as a different question.

Not the answer you're looking for? Browse other questions tagged transistors digital-logic multivibrator or ask your own question.