I have an old audio amplifier (JVC A-GX2B) that sometimes produces crackling noises on one of the outputs. So, I opened it and discovered that its two largest capacitors seem to be leaking : 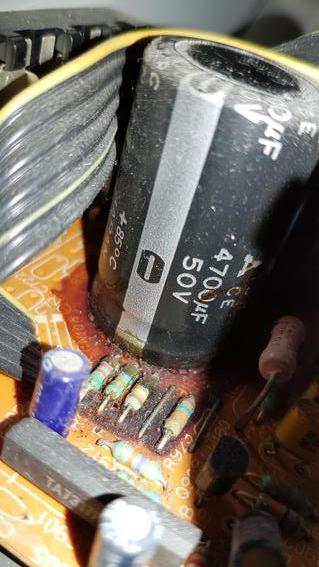 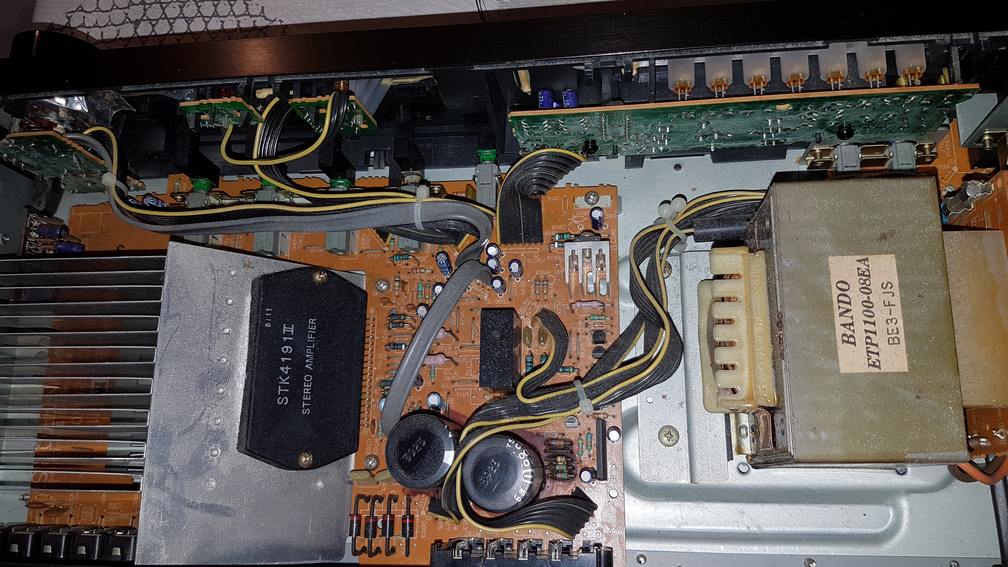 Can I replace it with any capacitor with the same characteristics (4700uF 50V), or should I instead take specific capacitors for audio? If yes, which ones ?

In addition, do I have interest to replace all the capacitors of this amp (not only the 2 largest)?

as suggested: Cap voltage must be same or more
- also capacitance tolerance doesn't matter, and may be larger value.
- all large e-caps may be replaced at same time.

I'm not going to answer the question you've posed - Tony Stewart has done a good job of that.

I'm going to address your assumption that those capacitors have leaked.

Capacitors and other parts are often glued into place in audio circuits. If they could move, then they could cause noise. Sometimes, in an effect called "microphony" parts will pick up sounds or vibrations and inject them into your audio. If the parts are glued in place, then they are far less likely to cause problems.

Large parts (like your capacitors) can also break off from their own weight if the board is accelerated violently (say, dropped on the floor.)

Your capacitors appear to be glued down. The glue is often a brownish color as in your pictures. Also note that it only extends a couple of millimeters around the part. If it were leakage, it wouldn't be as evenly distributed.

The electrolyte is corrosive. If the stuff you see were electrolyte, the wires on the parts that have brown stuff on them would be greenish (copper turns green when it corrodes.)

Finally, those capacitors appear to be in the powersupply. If they were the cause of the noise, it would cause noise on both channels at the same time.

So, I think your problems lies elsewhere.

After that, flip the board over and look for solder joints that have gone bad.

Often times on old equipment, you will find a part with a leg that has a "ring" around the pin where it comes out of the solder on the back of the board. Heat and vibration weaken the solder, and the pin breaks loose. It isn't soldered any more, but it still conducts, because the pin is still mechanically in contact with the solder. Vibration causes it to lose contact, and you get noise.

Not the answer you're looking for? Browse other questions tagged capacitor amplifier audio or ask your own question.

1
Setting the bias for the power amp section of an audio amplifier?

7
Amplifier capacitors
10
LM386 audio amplifier not amplifying
2
Input voltage for LM4862 audio amplifier
1
What are these electrolytic capacitors?
3
Repercussions of choosing a poor audio amplifier
3
Raspberry PI audio over Cat5e wired ancient hotel intercom
17
How to find the problem of this old Marantz amplifier?
0
The purpose of capacitors C1, C2 and C3 in this audio amplifier