Many of you who make audio circuits are likely familiar with the following simple design:

Recently I've used this little circuit to take the gate signal from one piece of gear (I'm using a LepLoop) and trigger (or close) the "push" of the One-Key-Play button on my old Casio PT50. This allows the Casio to be sequenced in time. It works great, for the most part. More specifically it works while playing sound out of the Casio's speaker, and with headphones plugged in. The problem arises when I plug the Casio's audio output into a mixer which also receives audio output from the LepLoop. In other words, the LepLoop sends gate-out to the Casio and sends it's own audio to the mixer. In this setup the Casio is no longer triggered.

Some strange things to note:

I've tried modifying the circuit in a hundred ways using different arrangements and values of resistance and diodes with no luck. At this point I'm pretty stumped so any help would be greatly appreciated. If I can't figure this out I might be forced to explore solid state relays for this application. Any suggestions there would also be appreciated. Thanks!

The circuit you used to convert from Voltage trigger to Switch trigger connects 'ground' from the V-trigger source to 'ground' on the device being triggered. This works fine when both devices do have their grounds on these ports.

But the Casio PT-50 probably has a keyboard matrix with neither side of the button grounded. Your hack connects one side of the One-Key-Play button to the LepLoop's ground. You may get away with this if you don't make any other connections between the PT-50 and the LepLoop (or any other equipment that shares a common ground with them), but as soon as you do a short circuit is created between the switch matrix and ground in the PT-50.

To prevent a short circuit you need to break the electrical connection between input and output sides of the trigger circuit, while still passing the switch closure signal through. This can be done with an opto-isolator, which uses an LED and phototransitor to transfer the signal via a beam of light. Here is an example:- 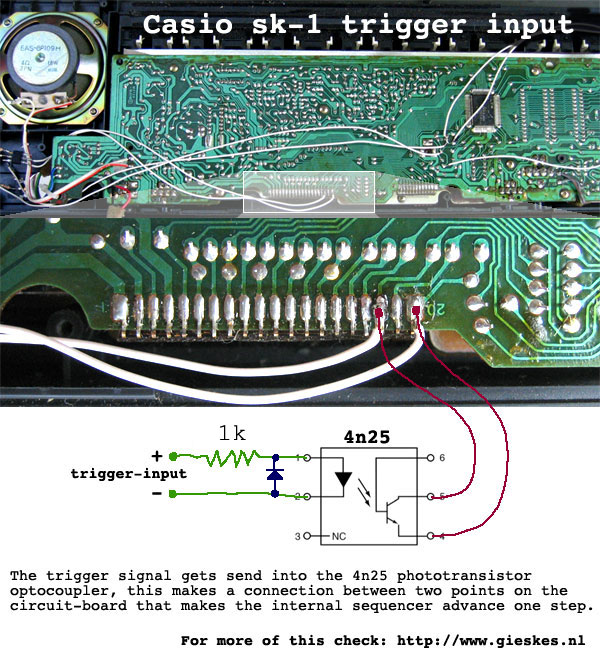 The transistor in the 4N25 works the same as in your original circuit, except that it is turned on by infrared light falling on its Collector-Base junction rather than a direct connection. As in the other circuit the transistor only conducts in one direction, so you should connect the Collector and Emitter to the same points.

The 1kΩ resistor sets the LED current, and the diode between pins 1 and 2 prevents damage to the LED from reverse voltage (it can be left out if you ensure that the V-trigger polarity is correct).

1
To share or not, grounds of two power supplies
5
Which are the input/output requirements of a 12V trigger interface?
1
How to connect one pin to ground when an another analog pin is triggered
1
Simple audio equalizer design: One filter is sending all the other signals to ground
0
Make ground signal last longer?
1
LED current at output of AND gate
0
Using a ground signal as trigger
0
Got audio mixer circuit with lot of noise. Using two different circuits with same output and noise
0
Why is my SCR controlled by a photodiode pulsing when supplied with high voltage