How safe is parallel wiring two ATX PSUs, if they weren't explicitly sold as dual PSUs?

Pages such as this discuss wiring ATX PSUs in parallel, in what seems to be a sensible manner, with links to various projects showing details.

Companies with a decent reputation for ATX PSUs, sell cables specifically for that purpose, and many others sell them on Amazon.

I'm interested in running two PSUs in parallel but would like to know how safe it is, if done right.

I'm running a large (20+) HDD array on an underpowered but extremely high quality 750W PSU. I need to upgrade the PSU to ideally get around 5v @ 35-40A and 12v @ 115-130A. Dual PSU with as second 750W - 850W PSU seems to have a lot of advantages over replacing with a 1600W or higher PSU, and perhaps no disadvantages. Both would be same brand, possibly same model, single rail, and very high quality build+output. 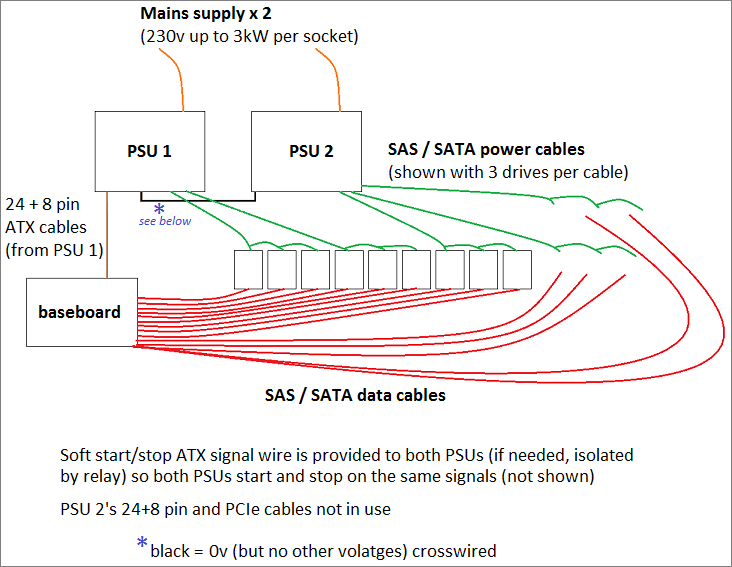 Electrically it looks simple enough. Give them both the same shared "soft start/stop" feed, and crosswire 0v to give them a common ground plane. I'd have a stability advantage over the mining users in that I don't want extra power for PCIe graphics cards, my need is extra 5v/12v power with a common ground plane just for external HDDs. So I'd have one PSU handling the baseboard and 1/3 of the HDDs, and the other PSU handling the other 2/3 HDDs.

Parallel PSU also beats a larger monolithic PSU in other ways that benefit me: I need disproportionate 5v, more than even a 1600W PSU would provide (5v @ up to 36A needed for HDDs but not used by PCIe/graphics cards which large PSUs target, so max on even a 1600W PSU is about 24-30A while dual gets me 48A). It doubles my HDD connector sockets so I can reduce current/heating in any given string (5-6 HDD connections per PSU, so only half the number of HDDs on each). It also spreads heat dispersal between them. I don't have resources for a formal dual-PSU case of the kind I'd need, so it's either dual high quality standalone PSU or large PSU. So I'd like to do it if I can.

In theory I'm guessing there shouldn't be much scope for problems due to current loops. Also, unlike wiring in series (see this question), their 0v planes would be connected so even if both PSUs were earthed, I guess the earth would be in common for both anyway, which might help avoid earth loop issues.

In theory, provided it works electrically, I use very high quality PSUs from the same brand/model range (which I would), and I double check the crosswiring and junctions on any crosswiring cable before using it, dual PSU is a far more efficient solution, gives several electrical benefits, and costs 1/4 the price of a monolithic 1600W PSU while guaranteeing that both 5v and 12v peak current capability are met.

But electrically, the PSUs weren't explicitly intended for dual use so I don't know. How risky is it? How safe if done right?

Is this pretty much how any dual PSU works?

Am I missing any other important safety/setup issues that I have to know/do, to dual PSU safely and not imperil my equipment?

If in doubt don't parallel them - it could end messy. However, you should be able to split the load into two halves and use one supply for about 50% of devices and the other supply for the remainder. You should cross-tie the 0 volt ends of the two power supplies as well.

As one of the biggest players in storage pods, Backblaze is one good source of information around these systems.

As they mention, they use two power supplies not for redundancy but for splitting the load between them. I haven't found the details on my quick search but they should be around as they provide all the information for a rebuild of their storage pods.

From that article above they seem to do it like Andy aka suggests - put one half of the drives on one PSU and the other half on the other PSU.

The linked article also describes that they were trying out a single PSU solution with a 750 W PSU - which seemed fine even in the advent of all drives starting at the same time. That scenario can further be mitigated by staggered spinup, so that only a set number of drives spin up at a certain time.

Someone gave a link to this question when asking another question on a third party site, so I just wanted to provide some clarity.

Companies with a decent reputation for ATX PSUs, sell cables specifically for that purpose, and many others sell them on Amazon.

The only thing these cables provide are a convenient way to start and stop a second PSU when turning on your computer. You could achieve the very same thing by shorting the black and green connections that the adapter for the second PSU utilizes. The cable is simply sharing the state of this connection across the two PSU's.

Is this pretty much how any dual PSU works?

The term "Dual PSU" is ambiguous. You typically have two types of ways two or more PSU's are configured:

In either case, it's not technically what I think most people would consider truly parallel from an electric perspective. That would look more like physically combining all the 3.3V, 5V, and 12V sources from both of the power supplies to increase their amperage, and running new Molex/SATA from that.

Dual PSU with as second 750W - 850W PSU seems to have a lot of advantages over replacing with a 1600W or higher PSU, and perhaps no disadvantages.

At least one disadvantage I could think of with details you provided would be if the PSU that was powering the 2/3 of the ~20+ HDD's failed. You would have have the OS running, and whatever was managing the state of the ~20+ HDD's ( providing they're not running as 20 independent disks ). Whether that was a RAID controller, or something like ZFS, it might start to trigger a process that would make unnecessary work to restore everything where as if all the HDD's were running off of the same PSU the restoration of the disk would be significantly easier.

Not the answer you're looking for? Browse other questions tagged power-supply parallel ground-loop atx or ask your own question.

1
Use PSU as replace for broken source +12Vdc 3.33A?
3
How can I power my 6-pin PCI Express card without using an ATX power supply?
2
Power ATX motherboard from JAMMA
1
ATX PSU +12V outputs connected in parallel
1
Is it electrically safe to use an ATX PSU's PCI output for SATA/MOLEX instead of graphics cards?
0
Powering 64 SATA HDD from Single ATX Power Supply
0
Running 220v and 110v power supply on same computer
0
Turning on PC PSU with current or bridging PS_ON and COM/GND?
0
15v from 20pin and/or 24pin ATX Power Supply. Connecting PSU circuits in series
1
How to get 5V from 12V with server power supply unit?