I need to create sixteen isolated power supplies on a single PCB.

I was thinking that maybe I could just wind my own transformer with one primary coil, and 16 secondary coils. Drive the primary coil with an H-Bridge, then use bridge rectifiers and capacitors to smooth the outputs.

My cost and space budget are small, but negotiable. So I'd rather not just buy a whole load of off-the-shelf supplies. 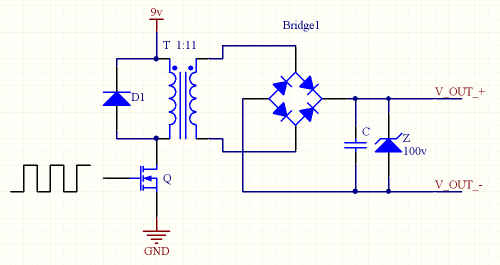 The tone of your question implies that you have little-to-no experience with switching power supply design.

You are going to have an incredibly difficult time if you want to make a transformer with a single primary and sixteen secondaries. The construction of a transformer is often more critical than the hard electrical/magnetic parameters (turns ratio and core material) due to their being so many degrees of freedom (leakage inductances, coupling ratios, copper loss in the windings, interwinding capacitances, etc.).

If the secondaries have to be isolated from the primary, but can be common to each other, you can go with a single secondary winding rated for all the power you need, and use point-of-load converters (bucks or synchronous bucks) to regulate each rail and provide overload protection (to keep one rail from bringing down the entire bus). You can get complete synchronous buck stages in 2mm square packages (a few external parts and you're done.)

If all 16 rails have to be isolated from each other, I'd recommend not using more than four secondaries per transformer (obviously you need four converters). You could go with a flyback converter design, which simplifies the secondaries (no filter inductors needed) and allows for output > input with galvanic isolation. There are many integrated flyback controllers on the market that contain the MOSFET and control circuitry, just wire up some feedback through an opto and away you go.

You (of course) need a properly-designed transformer, so "yes" the turns do matter as well as the actual number of turns used. The number of turns impacts the inductance, peak current and peak flux density of the transformer. A proper transformer design optimizes the number of turns to minimize core and copper losses, and requires a thorough design procedure. There is no 'magic' number, and more is not always better. For a flyback converter, there are more/different constraints, since the transformer has to be designed to store a certain amount of energy.

For super simple a 1:1 choke used as a transformer and driven with a transistor rate to 100V+ will suffice.
N channels can be driven in parallel.
Choke primary in say MOSFET drain to V+ Pulse gate on, turn off.
Drain rings to 100V+ and is rectified to output cap.
100V x 10 mA = 1 Watt/channel = non trivial.
On period designed to just start to saturate inductor core, or less.
Repetition rate & thus mark space ratio related to power required.
Output regulation can be by zener per output.

The MC34063 datasheet doesn't seem to mention isolated supplies.
Can it do them?

Yes. This is essentially doing what the FET based cct that I discuss in more detail below does BUT using the IC to look after the control. Add secondary winding to inductor. Note that this MAY need to be modified very slightly so a small capacitor is charged on input side to provide a sense voltage for the feedback BUT it can also be run open loop with a little playing. For the general idea see ...

fig9a here with a winding added to the inductor

Pin 1 would not want to be returned to the inductor as shown as it sees full flyback voltage.

Your circuit (almost) shows the pulsed inductor approach I mentioned.

An N:1 inductor pair is "nice" BUT 1:1 pairs are available off the shelf premade and very cheap as differential or longitudinal noise chokes (how the dotting is used affects which they affect). These are wound on largish ferrite beads. You want one with enough inductance and current capability when one winding is driven with DC and enough frequency response and low enough loss (draws deep breath) that it can be used here. They exist.

Off time is small as 1:1 inductor will discharge in ~~= Vin/Vout x ton

So energy transfer can be controlled by on pulse rate.
Max on time is set by inductor ability to handle Iin.

In this case D1 is not required and would prevent operation.
C & Z now act as the clamp.
And the output side needs only a single diode Dout from the non-dotted side of the secondary to Vout+ with the dotted side going to Dout-.

When Q is on you get small negative output which is blocked by Dout. When Q is turned off Q_drain rings positive so Lout undotted rises to as high as is needed to allow magnetic flux to vary smoothly continuous. Dout will conduct and clamp the voltage at Lin to the same as Vout - ie FET will see say 100 V at drain. In a lossless system the output will deliver N times the voltage for 1/Nth of the on time. 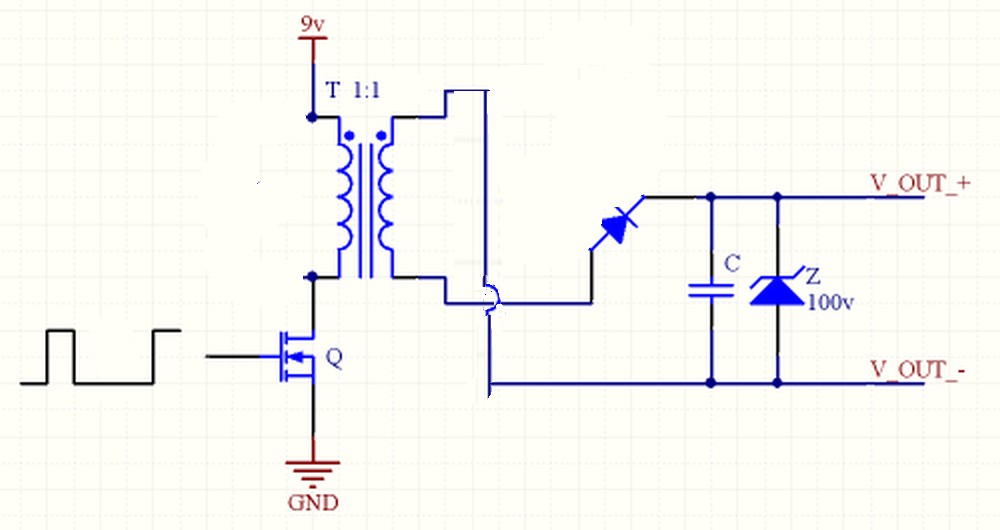 -* E&OE - Rushing, written on the fly unchecked, should be right, may be wrong due to typo, idea is OK.

Not the answer you're looking for? Browse other questions tagged power-supply power high-voltage isolation or ask your own question.