In a school project we will try to implement a control system for a boost power factor correction (PFC) converter. The converter circuit can be seen below (http://www.ti.com/lit/an/slyt517/slyt517.pdf).

Does anybody know of a simple way to get a transfer function for an interleaved boost? All of the papers that we have read have very advanced derivations that are hard to follow, and the end result is usually very complex and difficult to use. Any guidance would be appreciated. 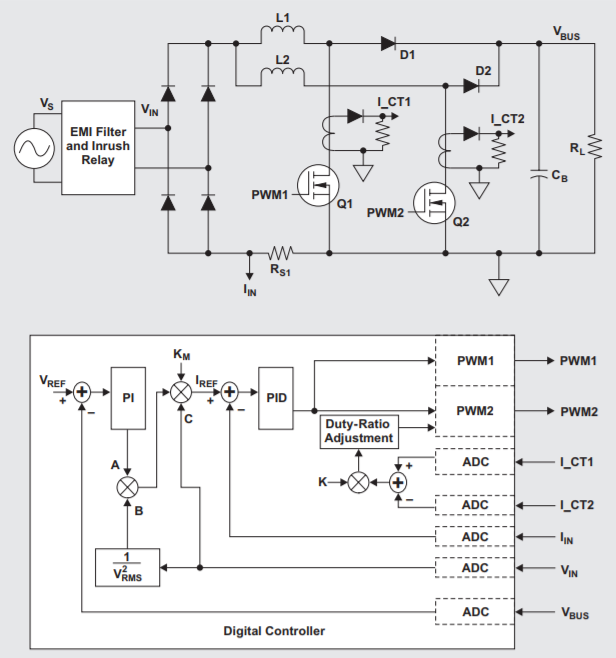 Does anybody know of a simple way to get a transfer function for an interleaved boost?

No. That is not a simple thing to do.

The cold, hard truth is that this stuff is a pain, it is not simple, and when they say it is only complex in the frequency domain, they don't mean literally. Sorry, bad math joke. While it is very possible to work through these derivations, I am not sure anyone would describe doing so using the word 'easy', or even without using expletives.

the end result is usually very complex and difficult to use.

Now, I am not about to tell you anything you probably haven't already found. But this is actually not that bad, because this is really just two boost converters that are 180° out of phase and divide up the duty cycle between them. Beyond that, the topology is the same as two boost converters in parallel.

And you don't need to find the transfer function for your converter because there is nothing unique about it, someone else has derived the transfer function and it will hold true for any thing that is of this topology. Only the actual numbers will differ, and that is just 'plug and chug' - putting in values for variables.

And you don't need to find the transfer function at all. PID controllers are not limited to things we have perfect analytical solutions for. The only requirement is that a system behaves in a way that can be approximated to something that is linear. And that is really kind of arbitrary anyway, but I digress.

Indeed, even the 'formal' transfer functions you use for an analytical solution, at least in the context of describing circuit topologies, are approximations themselves, and are not actually true linear time-invariant systems. If you ignore the existence of parasitics and things like quantized circuit effects (shot noise etc), then you can pretend they're LTI systems.

It is perfectly feasible to achieve high PID performance using an approximation (in this case). You can also use one of several heuristic means of tuning a PID control loop - some variation of the Åström–Hägglund (relay) method would probably be most appropriate. I'd avoid the Ziegler–Nichols method, it is more of a 'eliminate all disturbances, overshoot be damned' tuning method. This needs a softer touch.

But you wanted the transfer function for what is called an n x m interleaving topology. n being the number of boost converters (2 in your case), m being the number of switches per converter (which is simply 1 in your case and can be ignored). Note that this means that the transfer function is the same even with an arbitrarily huge number of individual converters, and likewise any number of switches per converter. At least, if they are all 2π/m radians out of phase from each other, which is what makes them interleaved rather than simply 'a bunch of boost converters in parallel and fighting each other for regulation supremacy'.

TLDR, as good as you're going to get in terms of an actual, analytical transfer function:

You're not going to get any easier than this (Warning: PDF). On the second page it has all the small signal transfer functions you could want, duty to output voltage, duty to inductor current, inductor current to output voltage. Conveniently, it also tells you exactly what each and every variable in said transfer functions is, and exactly how to calculate it for your specific circuit in a table directly to the left. I do not think there is any way it can possibly be made easier. Remember, m = number of switches per phase/converter, n = number of phases/converters. 1, and 2 in your case. These are totally generalized and work for any n x m interleaved boost topology, including 1 x 1 (simply normal boost converter) or an 2 x 1 (one switch per phase, two phases).

Not the answer you're looking for? Browse other questions tagged control boost power-factor-correction or ask your own question.

10
How does control theory apply to my real-world processor-controlled boost converter?
2
Cascade Control System - Multi-Stage Temperature Control
0
bandwidth of digital control design in conventional dc-dc converter
0
Analog implementation of imaginary roots in a transfer function
1
What is a power factor correction choke (PFC choke) and how does it work?
0
confusion regarding QNET VTOL(Vertical Take off and Landing)
0
How to control the non-isolated bidirectional buck-boost converter?