Is this definitely common-mode interference and how can I model and filter it?

A test device which can output voltage between 0 to 10V by a knob is powered by a DC adapter which converts 220V rms(meaning 311V amplitude) 50Hz AC to DC. Device is not a commercial and its adapter looks like a two prong laptop adapter.

When I use this device with any data type of acquisition(either single or diff-ended) I see significant amount of 50Hz noise. And when I put a very large cap like 47uF between its output terminals the 50Hz noise was mitigating but still annoyingly exists.

Then I do the following test with a multimeter's voltmeter settings: 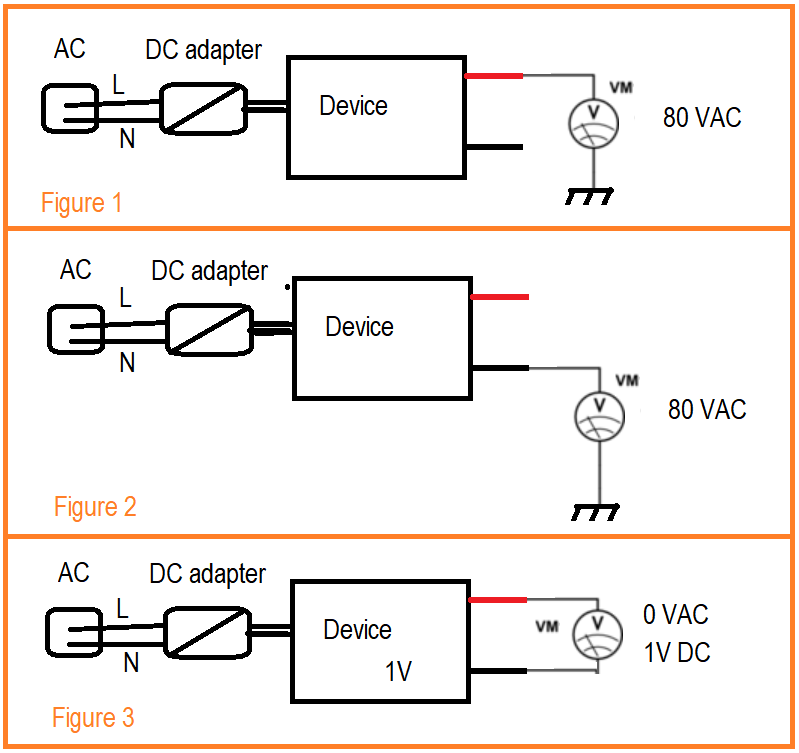 If I connect the voltmeter leads to each terminal of the device as in Figure 3 for lets say 1V DC setting I read 1V DC and 0 VAC.

And there is also another multimeter which has a low impedance setting. So if I set the voltmeter to low impedance those 80 VAC in Figure 2 and Figure 3 almost disappears to zero.

So I'm almost(?) sure that there is common-mode voltages on each terminal probably caused by the leakage through the power supply.

I measured the output resistance of the device between 20 Ohm to 100 Ohm.

The input impedance of the voltmeter I used is 10Meg Ohm.

First of all I wanted to model this in a circuit before I ask my question as follows: 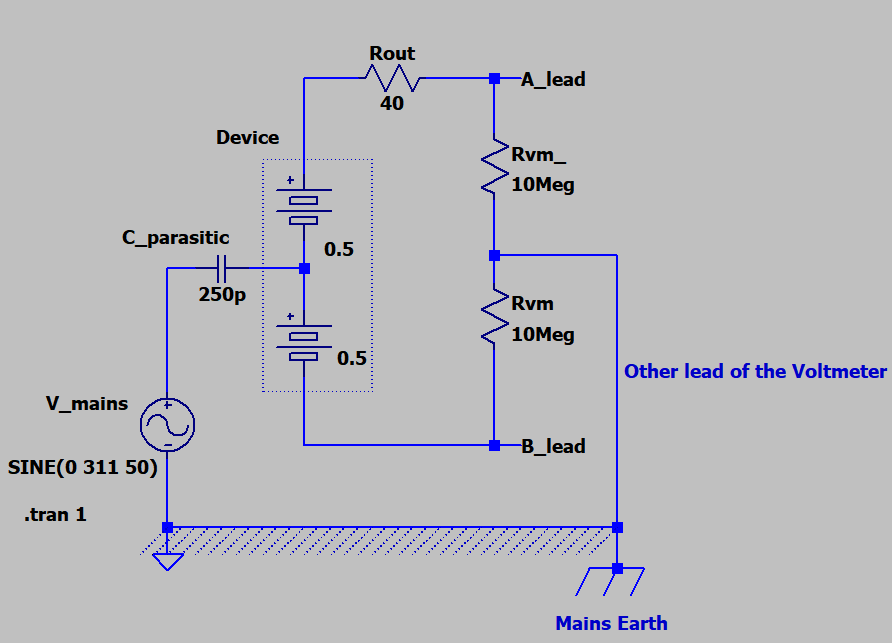 I've chosen the parasitic capacitance as 250pF such that to make the Figure 1 and Figure 2 voltmeter measurements 80 VAC rms i.e 113V amplitude sine. I also add the output resistance of the device as 40 Ohm to see the effects.

Below are the plots for Figure 1, Figure 2 and Figure 3 situations: 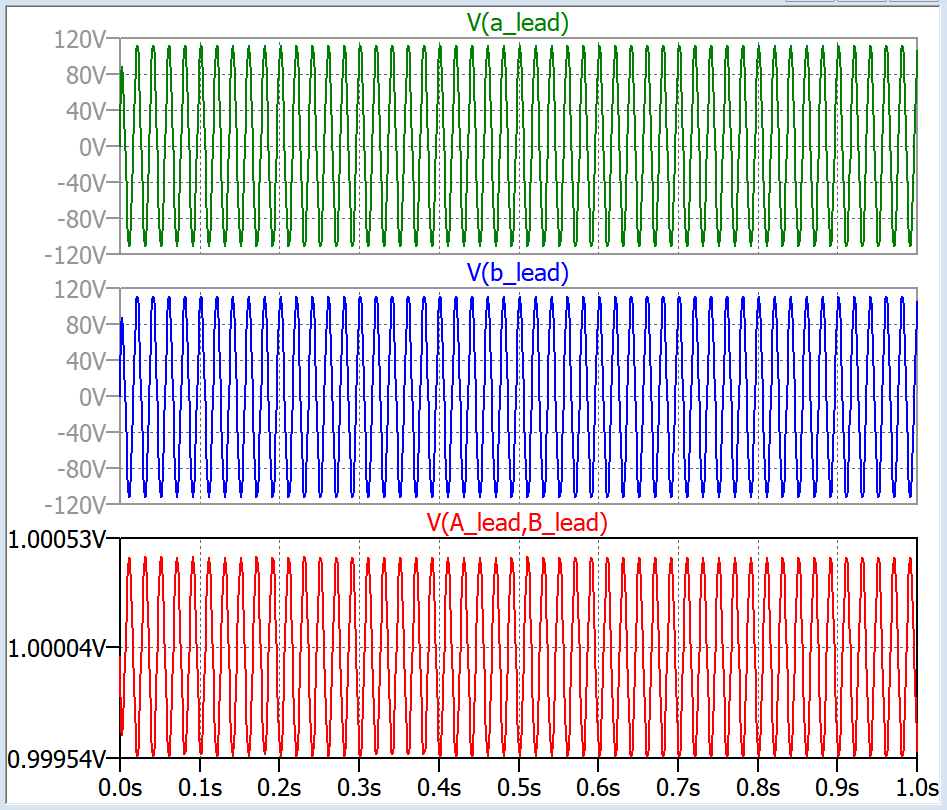 As you see above as the red plot the common-mode noise is not rejected well because of the unbalance above due to the source output resistance, there is 50 Hz noise on the 1V DC voltage.

1. Is my circuit model for the situation correct?

2. I tried to add some resistor Rx on the other line to match the balance in real but as long as the difference Rout-Rx is not zero I think there will be common-mode noise. In sim it is easy to match. I actually couldn't manage it in real since I only have fixed resistors.

So is it normally/practically done by using a potentiometer leads and adjust it very delicately? I heard about common-mode chokes but those are only for RF frequencies or still can be used for 50Hz common-mode coupling?

Yes it is CM line noise. 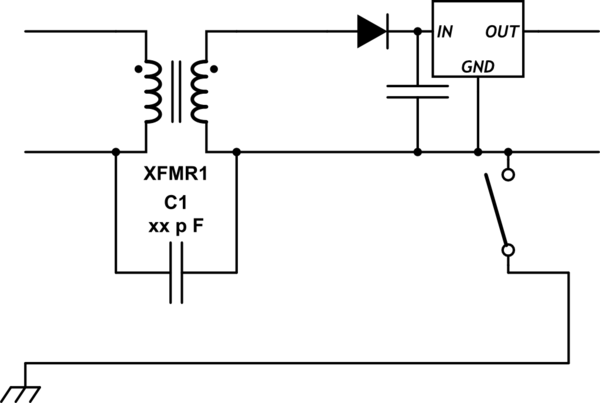 This is a well known phenomena in SMPSs. To avoid a lot of switching noise on the output wires they connect a 1 nF or 2.2 nF from the low voltage dc output to the primary dc bus voltage after the bridge rectifier so, apart from a pile of innocuous (to most circuits) 50 Hz, there can sometimes be a percentage of 100 Hz. So remodel the 250 pF to be about 1 nF and maybe use a bridge rectifier and smoothing cap loaded to give 20 volts peak to peak ripple.

Not the answer you're looking for? Browse other questions tagged noise inductor ltspice common-mode data-acquisition or ask your own question.

0
How to explain this solution to the common-mode voltages?
0
Is there a problem connecting PSU grounds to earth for an isolated signal chain in this scenario?

0
How is this 50Hz noise coupled to the sensor and why does it disappear when wired in a particular way?
0
How to explain this solution to the common-mode voltages?
3
Commonmode voltage and measurement with voltmeter and an instrumentation amplifier
0
Common mode range and DC common mode interference
0
Effects of increasing current on external noise and SNR for analog transmission
0
A question about oscilloscope and common mode noise
0
Comparing differential-ended and isolation amplifier outputs for an “unbalanced” source input
0
How to quantify the cable impedance for common mode voltages?
1
Inferring common mode impedance for a given CMRR