Diagram is made with http://wavedrom.com/

As you can see data is half the speed of the actual changes, the second half of each UART data-bit the signal always goes to logic 1 if it was not already 1.

If the data is 9600 baud 8 bits even parity and one stop bit, the current digital signal is not decoded well. Is there an easy solution to it? E.g. removing the change in the last half of the data bit.

For encoding, how could the UART data be converted back again? Since we need to add again the 1 for the second half of each bit.

How can this be solved? Since bit banging is not the nicest solution.

Thank you all for the answers.

IrDA mode is the easiest solution in hardware, provided by @Ben Voigt,

I started looking into IrDA, and found the hardware solution that works! The microcontroller that I am using supports USART-IrDA, for me it was necessary to invert the signal set oversampling to 8 and the pulse width to 4/8, to get the required 50% pulse width.

You could use the same baud rate if you delay everything after the start bit by a little amount. This can be implemented with a delay element (2 logic inverters acting as a buffer with some RC filter in between) and a mux and a counter. Or just add another MCU as oldfart says. Bit banging vs hardware solution. Easy vs hard. 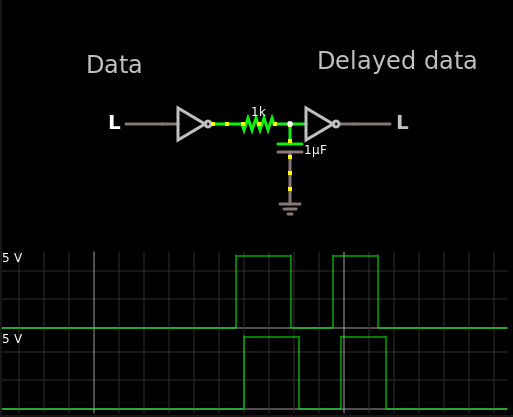 Here's the link if you want to mess around.

And the delayed data would be everything except for the start bit. So a counter that goes to 11 and then resets would be something. And a mux where the one channel goes straight through and another channel goes through the circuitry above.

It's only the zeros that send half 0 and half 1. In other words you can just hook up a circuit that sends inverted pulses on falling edges.

This is a simple schematic that does just that. All you have to do is change the RC constant. 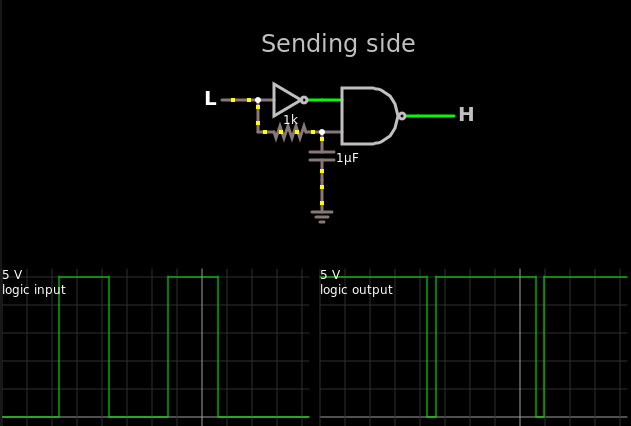 Here's the link if you want to mess around.

It's hard to make some bits when clicking by hand. But as you can see, ones keep the output at 1, zeros make it go low for a set duration and then goes back up again. Exactly as what you are trying to do.

Gahh I just realized that this circuit won't re-trigger if two zeros are sent in a row... Hmm, when sending I believe you need to use bit banging, because things are flipping at a specific clock. I doubt you want to use an external oscillator... well.. I don't even know if you are using one or not. Either way, I'd recommend solving it on the software side.

When reading, just use the same baudrate and everything should be fine.

When sending, use bit banging. If there is an external clock for the UART (turning it into a USART), then you can modify the sending circuitry above and solve it on the hardware side.

it can be solved in hardware by stretching the low parts of the signals: 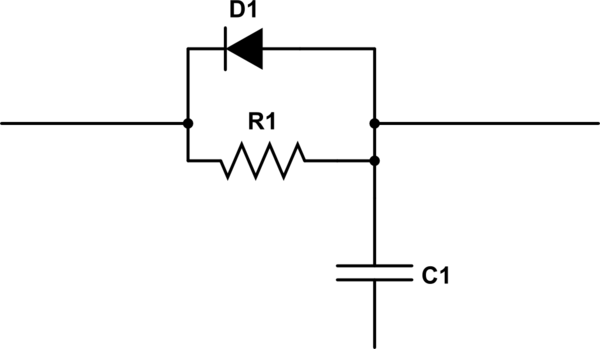 to create such a signal or the uart output with the bit clock.

Not the answer you're looking for? Browse other questions tagged uart or ask your own question.

4
Sending “larger than 8-bit” quantities over an 8-bit link
2
PIC24FJ64GB002 UART Bridge
0
How to check receiving 16-bit data using a serial terminal?
0
Baud rate for Square Wave data signal via UART if frequency is given
6
Decode/Analyse the following UART signals
1
Difference between UART and USART and the essense of oversampling on STM32F4
0
Ambiguity about concept of baud rate and bit rate
5
UART in my code transmits a character, yet on the oscilloscope I find it gave me another signal