I'm working on interfacing to a SPI bus that is exhibiting some... bad behavior.

The bus comes from a control box on a toy drumset. The control box is the SPI master, and it can be turned on and off with a built-in button. A separate circuit that reads from the drumpads is the only slave on the bus.

Here is my circuit. I still need to buffer the MISO line, but other than that it's what I'm using. 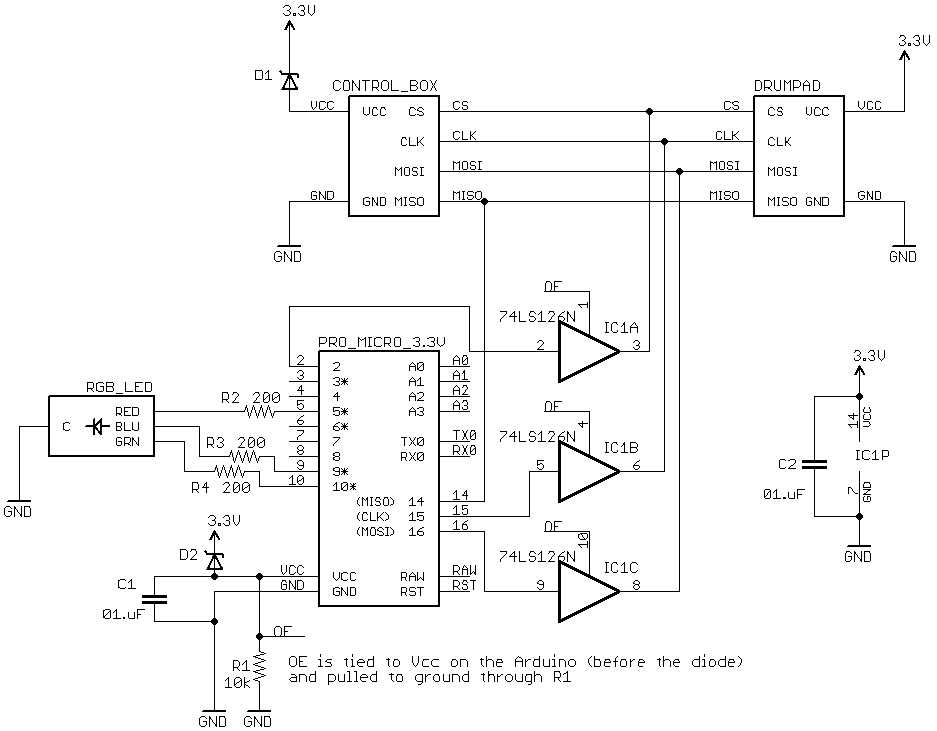 There are three states this circuit can be in:

My issue occurs during state 1. Although the control box is off, the SPI lines coming out of it are showing 3.3V. For some reason, the control box powers MOSI, CLK, and CS even though its VCC shows 0V! When neither the control box nor Pro Micro is on, the buffer is unpowered, and the outputs are seeing 3.3V. Somehow this is reverse-powering the buffer, which in turn powers the rest of my circuit.

Before I started using the buffer, I connected the SPI lines directly to my microcontroller (ATMega 32U4). I had the same problem: The SPI lines powered my Pro Micro through the reverse protection diodes on the pins.

So how can I drive these lines when they are still powered while the rest of my circuit is off?

So, the buffer configuration on (one) of the lines would look like this, with other parts of the circuit omitted for demonstrational purposes. 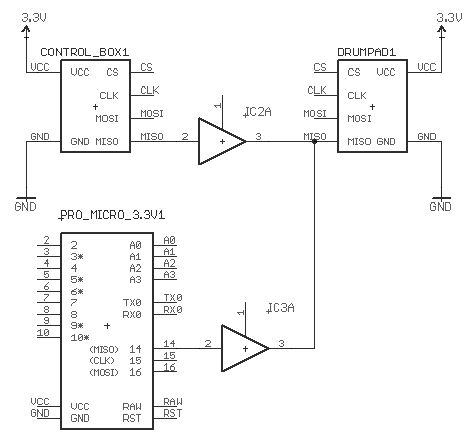 The unconnected pins on the buffers are the output enable pins, which I didn't connect (again, demonstrational purposes).

This circuit solves the problem because there is never power on the output of a buffer when the buffer isn't powered. Therefore, no reverse flow occurs.

Not the answer you're looking for? Browse other questions tagged spi buffer or ask your own question.

1
Off-board SPI communication issue with ADC128S052
0
Multiple SPI devices with different logic levels
0
Isolate microcontroller from board and use other one
3
How can I configure the FTDI FT220x for multiple SPI slaves?
1
Can I use an ATtiny84 as SPI slave and i2c master in the same application
0
How to interface SN74 buffer with microcontroller into another data bus
2
Multi master SPI mode? Or any intelligent way to switch only time between two masters?
0
Logic levels on tri-state buffer,
0
NXP PCA9615 I2C differential buffer - failure on SCL line
0
Best approach for sharing SPI bus across multiple sensors