All powerbanks that have car-jump function have some thingy between the clamps and powerbank socket: 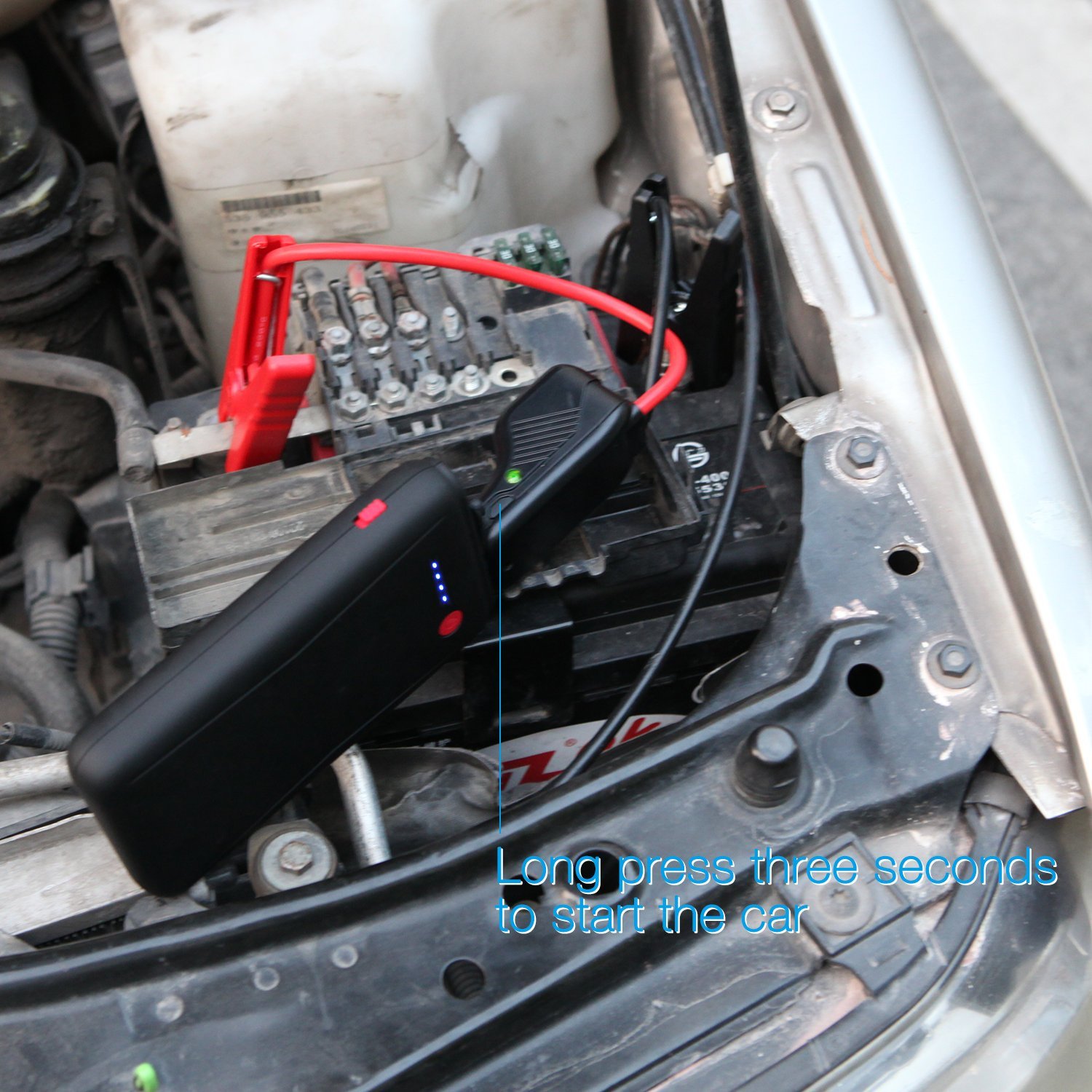 What's inside that thingy?

The manufacturers typically claim 300A of starting current for powerbanks as small as 8Ah, which cannot be drawn directly from Lithium batteries they have inside.

There's a related question I found here Jump start car from lithium ion laptop battery, but I don't believe it's just the protection circuitry, it has to have some kind of "boost storage".

Not sure which "thingy" you refer to. The smaller lump has protection circuits. But the secret sauce to these emergency car starter power packs is in the big lump. The reason they can put out so much current (hundreds of Amps) despite being such small capacity (e.g. 8 Ah) is because they use lithium iron phosphate cells.

Lithium iron phosphate batteries have incredibly low internal resistance. This means they can dump their small capacity as huge amount of current (hundreds of Amps) in a short time (seconds instead of hours).

Looking at the max discharge current, there's a huge difference, and that is because of the very low internal resistance (or impedance).

What? So that much current is only taking roughly 1/10 of the cell capacity because the time is so short! So we don't really need so much capacity to start a car: we need super low resistance for very high discharge current.

So put say 2 cells in parallel x 4 pairs in series and with 8 cells you can handle 200+ Amp discharges, 16 cells for 400+ Amps, at a voltage that is compatible with lead acid systems.

There's also electronics in there that protects from reverse polarity, etc, but what makes truly work are the very high discharge capability of lithium iron phosphate cells.

The doodad contains protection circuitry, for example against reverse polarity connection. The device can break the positive line with an electro-mechanical relay. See the below screenshot from this video. 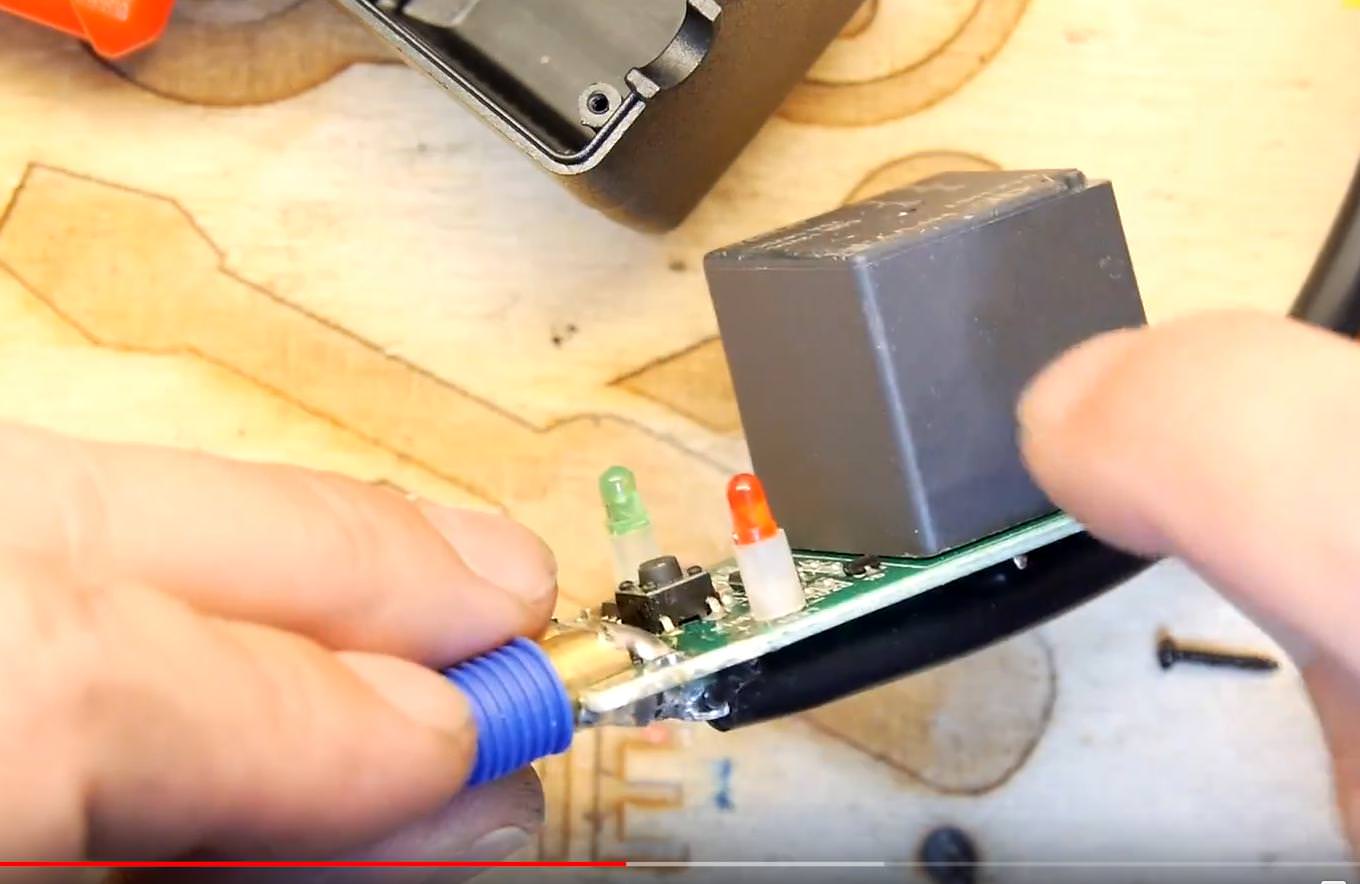 There may be short circuit protection as well, the circuit includes a couple of ICs (perhaps comparators) and a transistor to control the relay.

Many lead-acid battery based boost devices have had this kind of protection built in to their (relatively very bulky) enclosure for years. It's far too easy for the user to reverse the connections and you probably don't want it exploding or bursting into flames unnecessarily.

The chap in the video mentions bypassing it.. I suggest that is a really Bad Idea.

PowerBanks like money banks are just a place to store a charge, but you can't use it all at once to start a car.

It must be transferred at a rate the bank can support for a duration that is sufficient to charge the car battery and start the car.

They typically use LiPo cells but instead of 18650's they are flat packs.

When a Car starter motor starts at full RPM, I would expect the battery to drop below 12V. When it drops to half normal RPM sound I would expect Vbat drops to 8V under load. Thus I might expect from the photo, and the size, this Powerbank has some electronics but mainly 3 series and 6 parallel or 3S6P with a No load voltage of 3.7x3=11.1V and a loaded voltage of 3.1Vx3=9.3V which is enough to start the motor using 0.6V drop from 24mOhm/6cell or 0.6V/0.008R=75 Amp on a warm day to a 4cyl eng.

Not the answer you're looking for? Browse other questions tagged batteries lithium-ion lipo high-current or ask your own question.

0
Getting 12V out of 60V battery bank
1
What's a reasonable threshold for UVLO?
7
What type of fire extinguisher do I need for lithium polymer batteries?
1
Dangerous to store jump-starter power bank in car when outside temperatures peak at ~105°F?
1
Power bank DIY Build (Regarding protection circuits)
2
Solar panel and power bank
1
Why couldn't my battery pack start my car?
0
Building a powerbank/powerbrick from laptop battery - Cell quality verification after the fact