Hello! I've built a small adjustable PSU with a buck converter (XL4015 module) and a cheap 10A digital voltmeter and ammeter. It worked fine for a few minutes but after that the voltmeter started fluctuating between the real voltage and something like half of that, most of the time showing the wrong value.

I've wired it following a schematic on the internet, but powered the voltmeter from the input of the buck converter (where as in the schematic the red -meter power- and yellow -Vsense- wire where connected) because the output will go as low as 1.5V, not being able to power the meter. I've tested the meter separately and confirmed that the problem is related to it. I do have a spare one, but I don't want to do the same thing with it. Is the wiring correct? Is there any chance I could fix the meter? 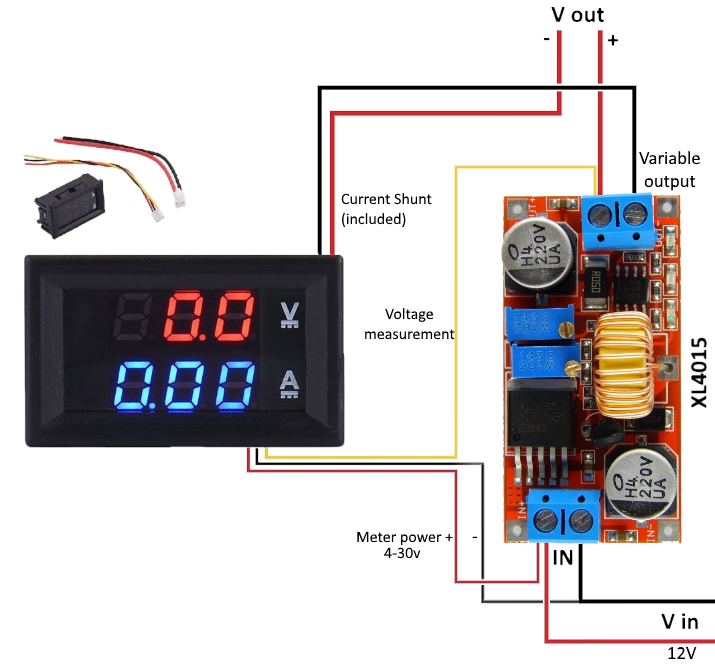 (edit:) Sorry for the lack of details, it was my first post.
Links:

The shunt is connected to the thick black and red wires. And I've let the thin black disconnected because It's common with the thick one.

It seems you have something close to this type of V/A meter, https://www.amazon.com/Paddsun-Digital-Voltmeter-Ammeter-Meter/dp/B01LSGP1UI

in which case the proper wiring connections are included on the left side of the amazon page.

Notably the thin red and black wires are the modules power inputs, while the yellow is the voltage sense contact. The wiring method depends on if you want the meter powered from the source power or the output power.

Not the answer you're looking for? Browse other questions tagged power-supply buck voltmeter or ask your own question.

2
Why does my PSU die everytime I test with multimeter
0
Connecting a Volt Ammeter to the input and output of a power supply
1
How do I Power a LED sign?
2
high resolution analog AC voltmeter mystery
0
Do I need to protect buck converter when switching to alternate power source?
4
How does this current limiter work? - and why doesn't it?
1
Why is my Voltmeter/Ammeter not reading amps correctly?
5
How to reduce MOSFET heating in Buck Converter
0
LM2596 based buck design doesn't deliver power and heats up