I have this circuit implemented on a prototype board. 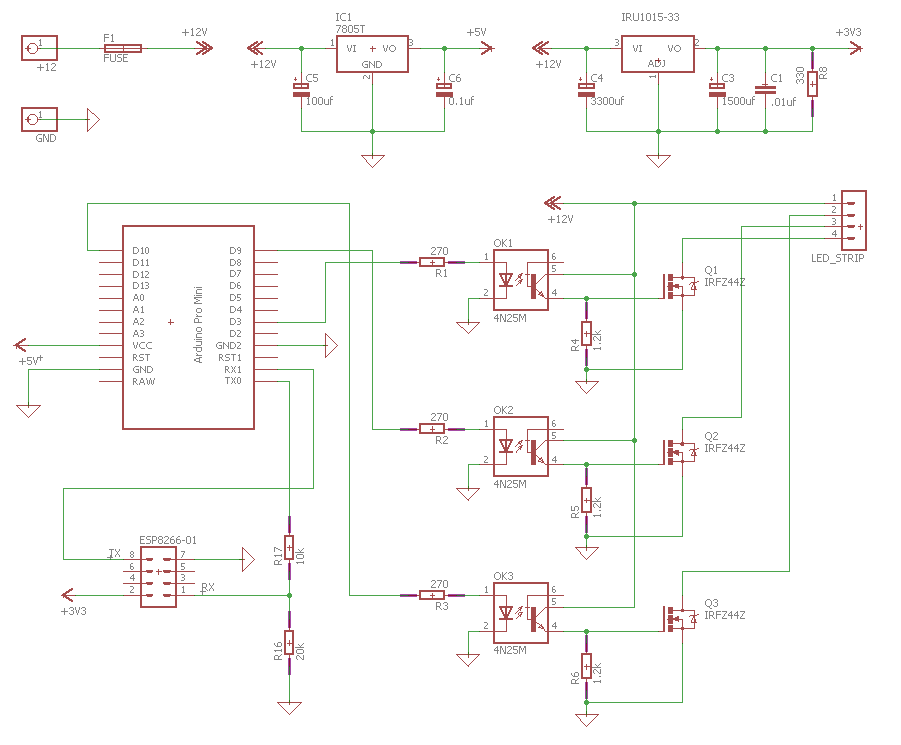 The led strip is a 5 meters 12v 30leds/meter RGB, controlled by PWM from the arduino.

Below are some oscilloscope captures I did. CH1 is the output from the 3.3v regulator. CH2 is signal between R3 and OK3, just for trigger and visualization purpouse.

Strobe effect from 0% to 100% duty cycle. This one shows the voltage difference better.

The IRU1015-33 has absolute maximum input voltage of 7 V. You are operating the IC way outside its design parameters. Anything can happen, and 12V on your communication module is a real possibility. Change the regulator to whichever can handle 12V input. Or switch the input of IRU1015 to +5V rail.

As @Ali has swiftly pointed out, you neglected the ABS.MAX.SPECS. in the datasheet, and by a huge margin.

You were also concerned why there might be so much ripple in the 12V from a 4A supply from only one 5m reel of stripLEDs.

Not knowing how this circuit is wired up, or how much current the LED strip draws...

One thing you may want to check is the integrity of the GND net. Does the voltage at the ground terminal of the regulator stay at zero, or does it increase with LED strip current due to resistive voltage drop along the current return path?

Not the answer you're looking for? Browse other questions tagged voltage-regulator pwm led-strip 3.3v or ask your own question.

1
PWM bahaving OPPOSITELY as expected on dsPIC33EP256MC506
8
MOSFET choice for 12v LED Strip and 3.3v Logic
1
MOSFETs acting strange on different power supply
3
What's the physics behind LEDs wearing out?
3
Will a LED strip be less bright when I drive my mosfets with 3.3V instead of 5V?
2
PWM Dimming 24v with 3.3v input
1
LED-strip PWM works with Raspberry Pi, doesn't work with Attiny45
1
Heated MOSFET with LED strip