I'm reading the LM3466 datasheet (page 9) and am confused about the symbol downstream of the SEN/SRC pins and R(sen). Is this a ground symbol? If so, why do they use multiple different ground symbols in this schematic? 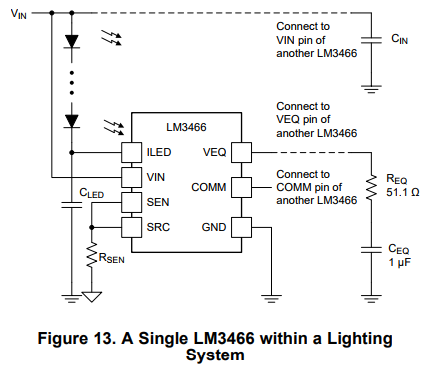 The datasheet says that \$R_{SEN}\$ connects to ground. It does not clearly explain the two symbols. The intent of using different symbols is to control the physical realization of the circuit. There is no universal standard. In this case, a different symbol for \$R_{SEN}\$ implies that it is to be connected to ground separately from the other ones.

The datasheet says that all LED current flows through \$R_{SEN}\$. Since this current may be significantly large and noisy, it can induce voltage drop in the ground wire/plane through which it returns to the source. Such voltage drop in the ground plane can interfere with the operation of more sensitive analog circuitry. Suppose you have a node referenced to ground, but a large current pulse through the ground plane induces a voltage drop such that the sensitive 'ground' point is now at some non-zero voltage. Now your sensitive node isn't referenced to ground, but to ground+noise.

In a complex system of these devices it would be critical to ensure that every \$R_{SEN}\$ is referenced to the same ground potential, or they will behave differently because of the ground voltage drop problem.

(As you noted in your comment, page 13 of the datasheet does mention that the \$R_{SEN}\$ ground connections should be "closed" for this reason--though it is not clear what 'closed' means. Maybe they meant 'close.')

Not the answer you're looking for? Browse other questions tagged led schematics texas-instruments symbol or ask your own question.

17
Use of ground symbols in circuit diagrams

17
Use of ground symbols in circuit diagrams
28
What do the arrows in transistor symbols point to (and from)?
4
What's these symbols style name/source?
3
Proper Arrow Directions for Off Page Connectors / Symbols…
0
How to create a symbol in EAGLE that consists of multiple other symbols?
0
Is there a standard for schematic power symbols?
2
Having Trouble Identifying Crystal Oscillator Symbol
2
What is the correct schematic symbol to use for virtual ground?
1
How should I interpret numbers 3 and 4 on the footprint schematic?