Due to a loose wire hitting something, I busted my 12v 3.2amps 38 watts PSU and the magic smoke came out. Apparently a fuse popped and I want to replace it. I don't know what it is and after some research on Google, I can't find it. I always come across 4 or 5 bands color charts. Never 3.

I have a second working unit exactly the same. Without any load I measured the resistance at 0.9 ohms (my DMM only goes down to 200 ohm resolution so it may be not super precise).

Here are some pictures: 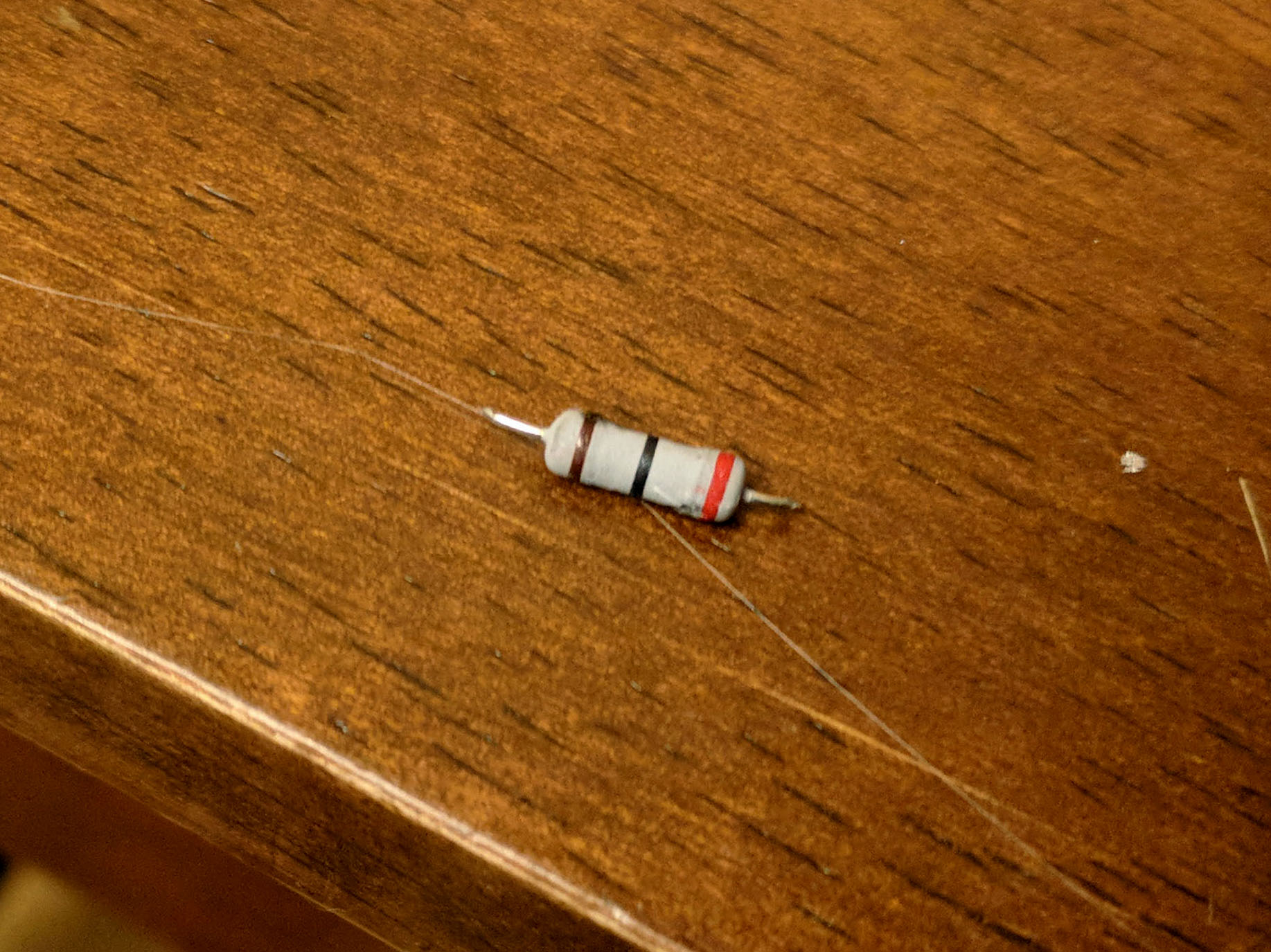 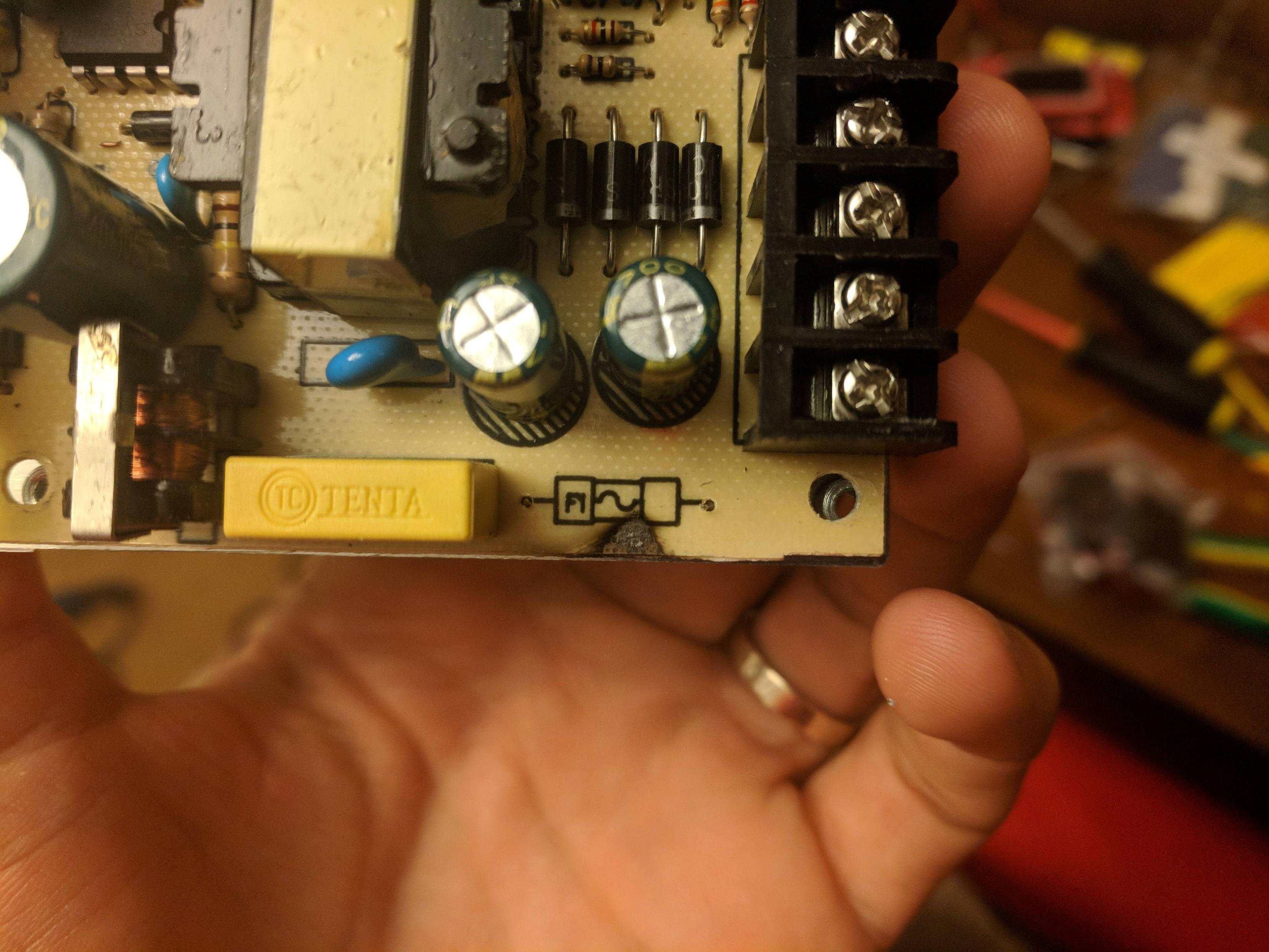 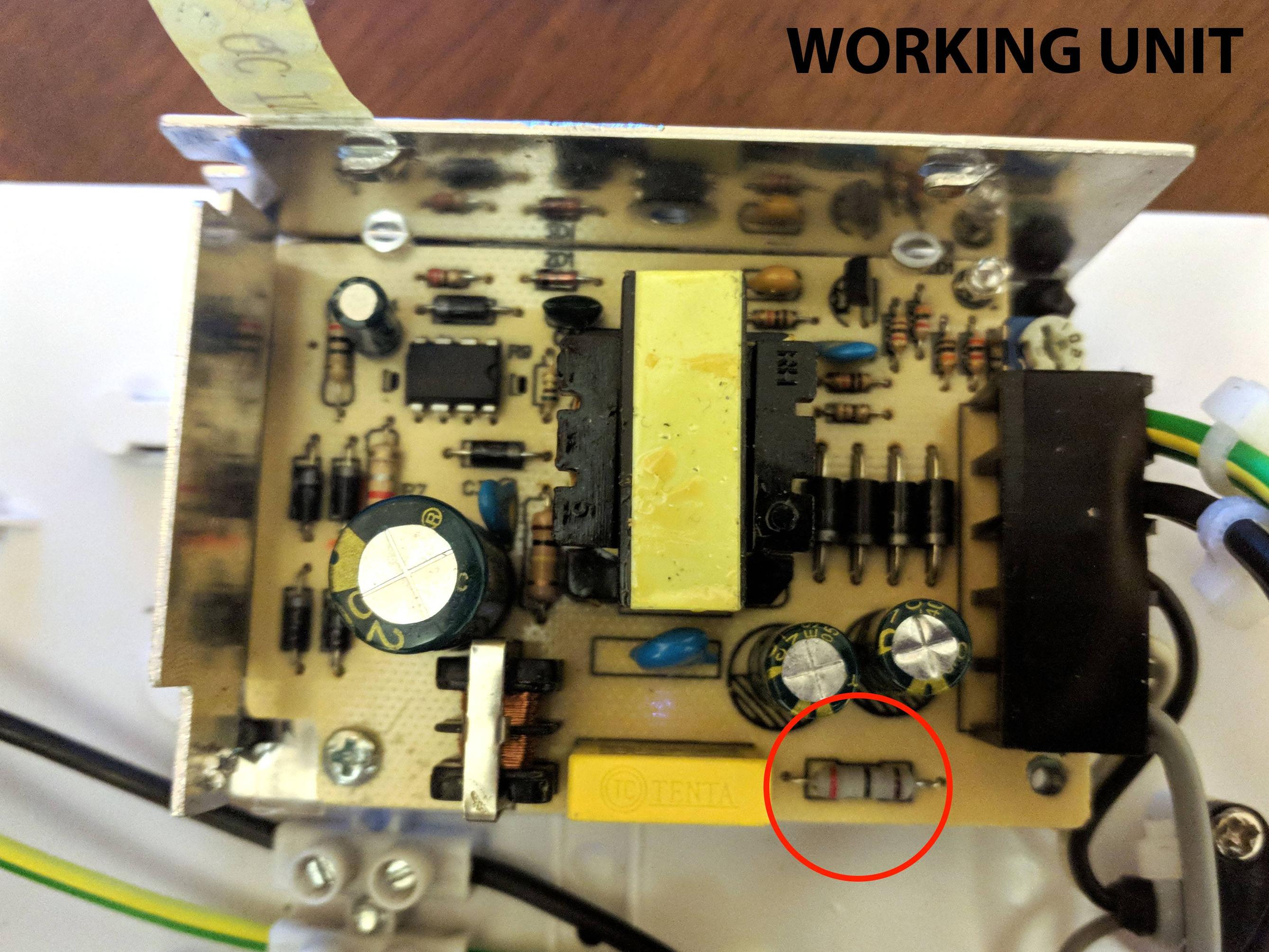 Look around on distributor sites for PC mount fuses. Look particularly at the Panasonic line, since they have a series of power resistors that look almost exactly like that.

You could take the one out of the working unit, connect it to a lab power supply and slowly ramp up the current to see where it breaks. Now you need two fuses, but at least you know the current rating.

Since this is a one-off, you don't need to find one in exactly that package. You have a lot of room, so you can rig up most thru hole fuses to fit in there.

Another clue is the power rating of the power supply. It is rated for 38 W out. Let's be pessimistic and say 80% efficiency, so 48 W in. With 110 V AC input, that would only mean 430 mA. There will be some startup inrush, but that is short-lived and most simple fuses can ride it out. 1/2 A is cutting it close, but 1 A should be more then sufficient.

It's not that critical. Even if the original was 1/2 A and you replace it with a 1 A fuse, nothing serious is going to happen in this one-off situation. The most likely failure that blows a fuse is a dead short, or close to it. Whether the fuse trips at 1/2 A or 1 A won't matter for that.

That all said, there is a reasonable chance that replacing the fuse won't solve the problem. It may well be that the stray wire caused something to get fried, which then caused too much input current to be drawn, which blew the fuse. In that case, a new fuse will just blow again quickly.

These units both look like they have been overstressed.

The faulty R colors read as 290 x0.1 ( red white black gold) where the 0 is multiplier and gold is a divider. ( the white is missing perhaps due to the same background colour but the spacing suggests there should be a band between Red&Blk )

Its purpose to the protect the smaller e-caps from ripple and surge current and also act as a fuse but with much higher resistance than a 1A fuse. Note on the good unit one black cap lid is slightly bulged from heat gas pressure.

Using a fuse may accelerate primary cap failures due to random turn on surge that may occur at peak voltage.

I hope you did not do this. If so , that would explain the failures and the bulged smaller primary cap on the good unit.

If you need more power to drive LED's I suggest get a Banggood LED Constant Current PS rated adjustable for what you need.

Not the answer you're looking for? Browse other questions tagged power-supply identification fuses replacement or ask your own question.

0
Can I use 2 exact same switching power supplies in parallel?