I've got this two chips: 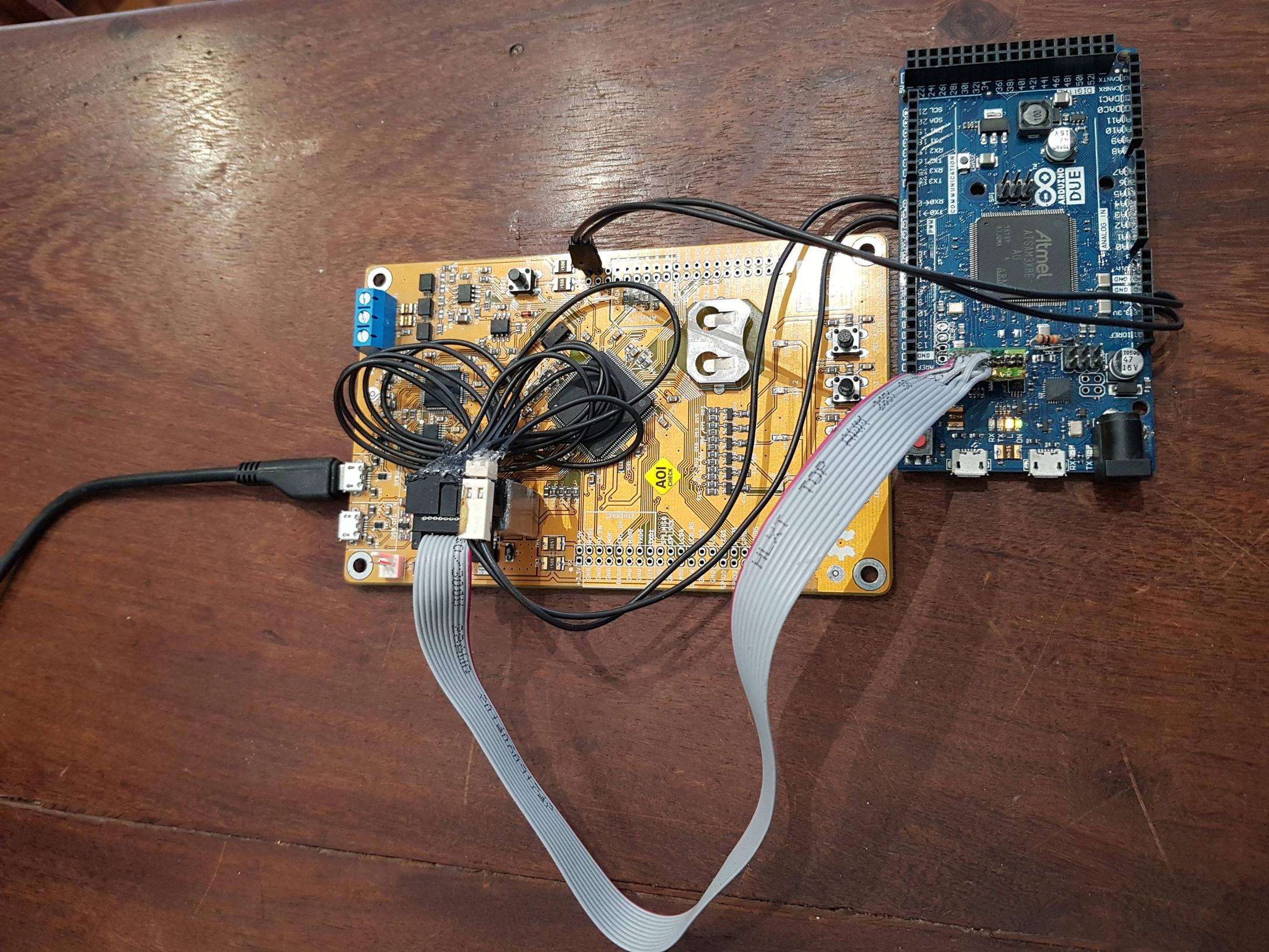 Board with LPC4337(left) and board with ATSAM3X8E(right), JTAG interconnected, using FT2232H chip soldered on the board of the left as an interface.

Error: Could not initialize the debug port

Some notes: If I change OpenOCD config to ignore the "IR capture error", the connection fails anyways, the first problem is the sam3.m3 TAP ID being detected as 0xfffffff etc.

Some notes: This is a successful connection.

An interesting thing is that both LPC4337 and ATSAM3X8E share the same JTAG TAP ID. Isn't this value chosen by the manufacturer? Is having different chips with the same JTAG ID a strange coincidence? May this be the problem preventing me from connecting both of them to the JTAG? I've seen repeated JTAG IDs being handled by OpenOCD before, but always with different instances of the same chip, not from different chip families like in this case. Is there a way to change chips JTAG ID? What other problems could be causing this behaviour? I'm interested to hear any kind suggestions, even if they turn not to be the solution they might help.

Some other notes: I've tried with two different ATSAM3X8E boards so I know the chips aren't faulty. Both boards were Arduino Due and worked when LPC4337 JTAG traces were cut. I'm running OpenOCD version 0.10.0 ("Freddie Chopin" compiled version) on Windows. I haven't got an oscilloscope. I would like to work with both MCUs without adding more modifications or cutting traces. I would also like to understand the fault that's preventing me to program these chips in case I design something in the future using them.

Lastly, I would like to thank the community for their time, I hope this post helps some other people in the future!

These are the JTAG interface schematics of both boards that were connected together. The flat cable is connecting Pin1 of "P3" connector on LPC4337 board schematic with Pin1 of "JTAG" connector of ATSAM3X8E board schematic, etc. (All 10 pins connected accordingly, tested with continuity with a multi-meter). 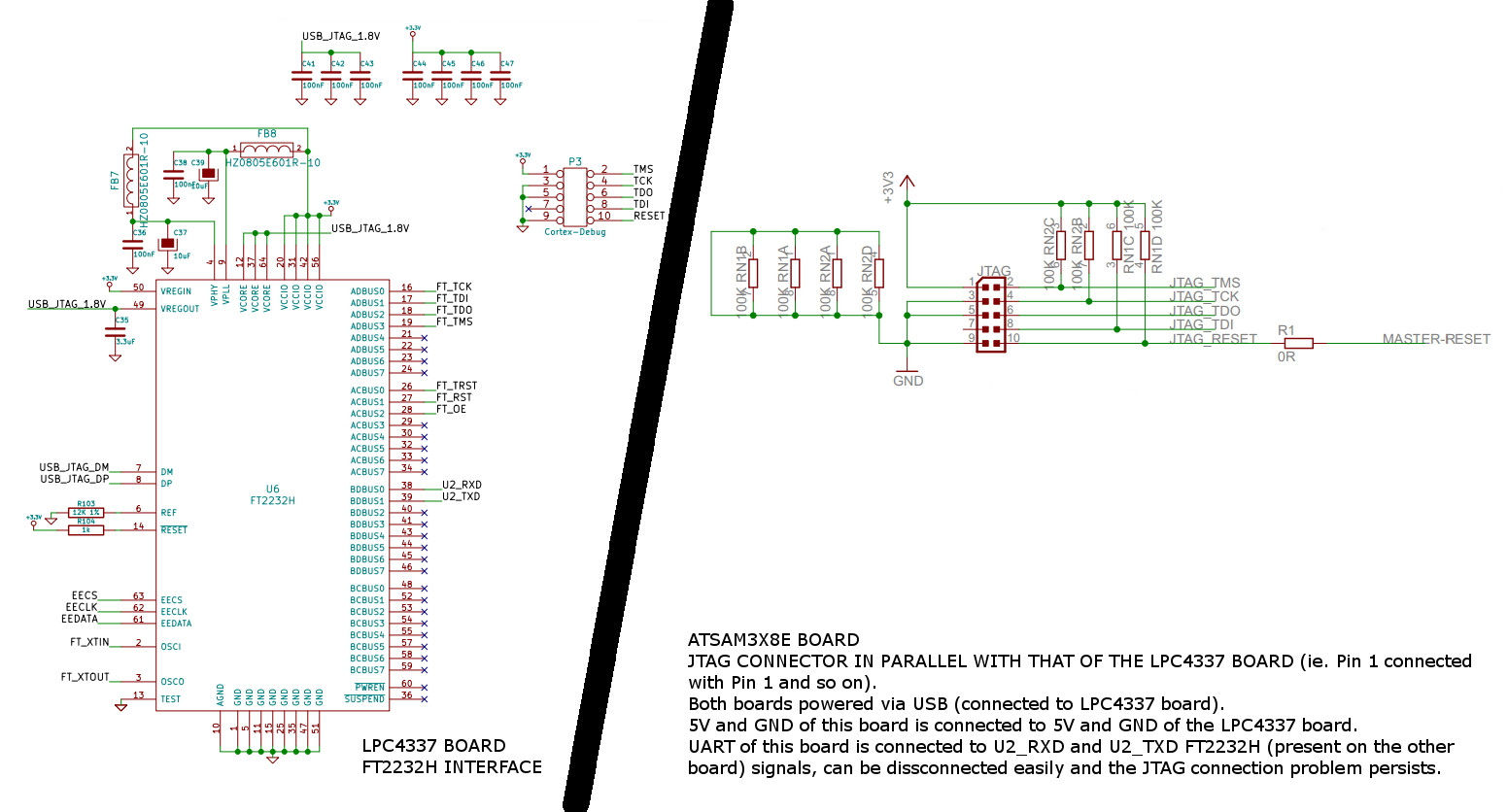 This is LPC4337 board schematic.

This is ATSAM3X8E board schematic.

Thanks to the answers I found out I was using a star JTAG topology but a daisy chain JTAG topology would be the standard approach. I will change my wiring and post my results. Thanks for the help. This will be my wiring topology (but with two devices): 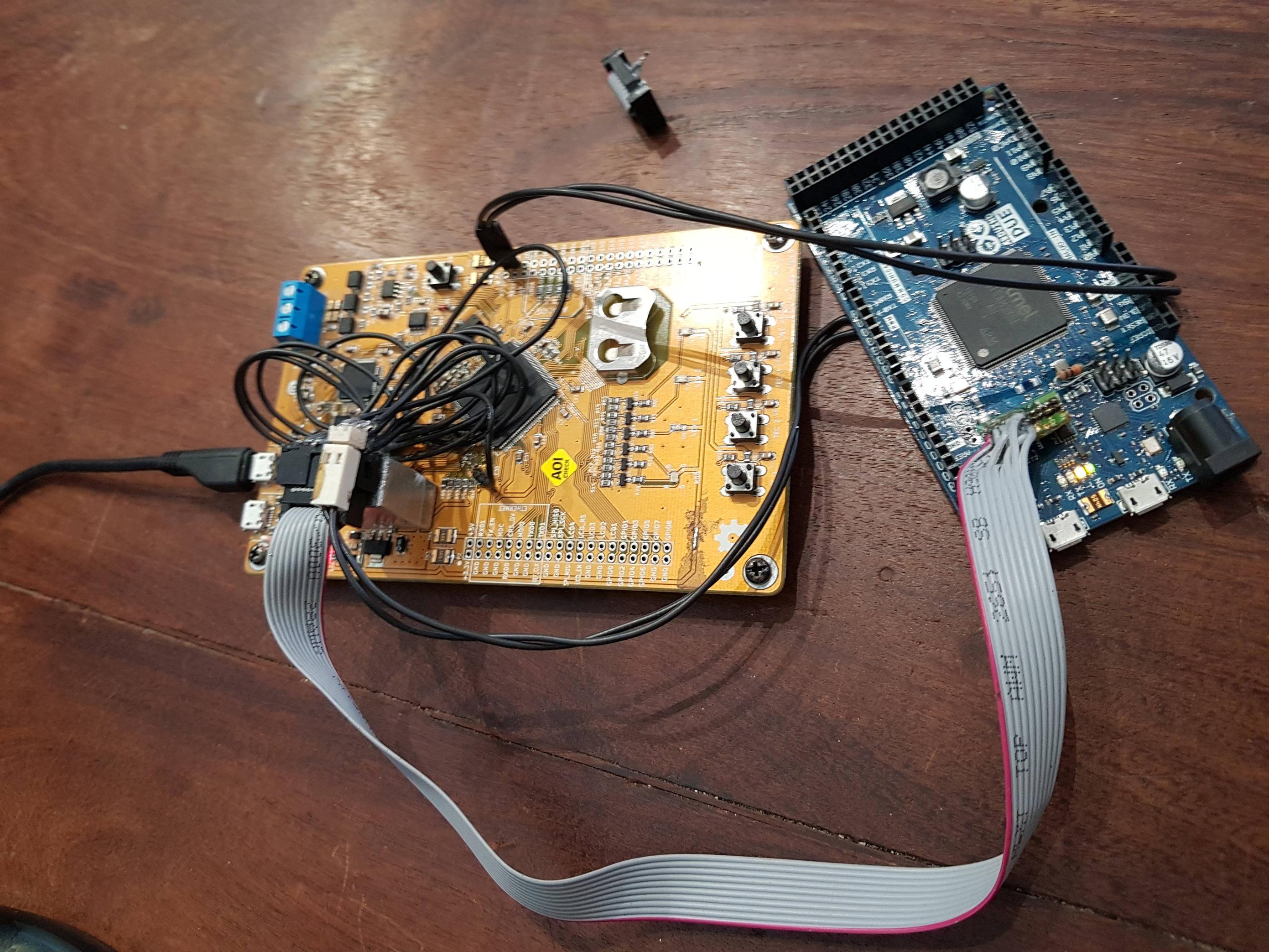 (the 0x4ba01477 TAP ID turned to be the ATSAM3X8E, I wonder if OpenOCD could be arranged in a different order [atsam, lpc m0, lpc m4] and work in a star topology or not)

Thank you all for your help!

The comments suggest you are trying to operate in 'star topology', but as far as I know, that isn't a well defined implementation.

Please confirm you're using daisy chained topology, where the multiple TAPs make up a single long shift register. Debug tools ought to cope with this since it sometimes occurs implemented in a single chip.

The TAP IDs that you quote are for the debug interface, they don't (and don't need to) identify the individual hardware. All they define is that these components use Arm CoreSight JTAG-DP, which provides an interface to memory mapped debug components. If you access the debug components in that memory map (which are discoverable from the registers that the DP provides), then you should find an ID value which ultimately identifies the chip.

Not the answer you're looking for? Browse other questions tagged programming jtag openocd or ask your own question.