My questions are these:

Induction motor torque is best visualized against "slip" (the difference between synchronous speed and actual speed): - 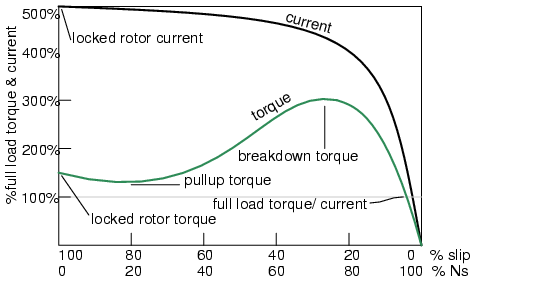 at what rpm approximately does it produce its max torque?

I assume by maximum torque you mean breakdown torque so the graph above should help. If full-load torque is at 5% slip then breakdown torque will be about 25% slip but the numerical detail depends entirely on the specific motor.

If the same motor is run with a VFD which is set at output rpm of about 20Hz will it produce a significantly different max torque?

This graph shows a motor run at different speeds from a variable frequency drive: -

See this article (entitled Module 6: A.C. Electrical Machines for Hybrid and Electric Vehicles) for picture above and other useful information.

Variable frequency drives normally use only the low-slip part of an induction motor's torque vs speed curve. In that portion of the curve, the torque per amp remains relatively constant. As the motor approaches the breakdown point, much more current is required to provide further increase in torque.

At frequencies below the motor's design frequency, the VFD voltage is reduced to avoid magnetic saturation. With a purely inductive load, the ratio of voltage to frequency would be held constant. With an induction motor, the voltage drop in the across the stator resistance and the leakage reactance must be taken into account. Various techniques have been used to optimize the voltage at reduced frequencies with the object of providing the same torque vs speed curve from stall to the motor's design speed. The objective is to provide torque vs speed curves as shown below. The VFD starts the motor at a frequency at which the motor provides about 150% of rated torque using only the solid-line part of the torque speed curve. The motor is accelerated without allowing the motor to slip to the dashed part of the curves.

VFDs are rated to operate motors up to about 150% of rated torque. A higher intermittent torque rating would require the semiconductor switches to be rated at much a much higher current tor a given motor rating. The motor itself could be operated at a higher torque, but that torque is not within the capability of the VFD. That design strategy has been proven to be quite successful in the market over the past fifty years.

If say a 3ph motor connected to a mains supply is rated at 1400 rpm with no load at what rpm approximately does it produce its max torque?

The rated speed of a motor is the speed at rated or full-load torque, not the speed with no load. The speed with no load is the no-load speed which is approximately the synchronous speed. An induction or synchronous motor that is connected to a mains supply has a synchronous speed that is determined by the mains frequency and given by RPM = 120 x f / P where f is the mains frequency and P is the number of motor poles. The number of poles must be an even integer, so the possible speeds would be 3000, 1500, 1000 etc. for 50 Hz mains and 3600, 1800, 1200 etc. for 60 Hz mains and 2, 4, 6 etc. poles. 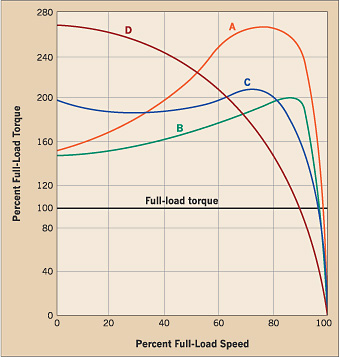 The maximum torque for that type of motor occurs at zero speed. Such a motor is not normally used with a VFD. If it were to be used, the VFD would likely limit the torque to 150% of rated torque. If the motor was connected to a VFD that would normally be used with a much larger motor, it could produce torque shown by sliding curve D to the left to the point where the zero torque point is at 40%. (20 Hz is 40% of 50 Hz). With the curve shifted, the Y axis would cross the curve at a little more than 200% of rated torque. Of course that would depend on how the VFD output voltage is is adjusted and the actual curve of the motor. Motors designs vary a great deal and using "typical" curves does not provide a very accurate estimate.

Not the answer you're looking for? Browse other questions tagged vfd or ask your own question.

1
3 phase electric motor torque output
0
Why even when we increase the synchronous speed, the slip still remains it's value?
-1
Why is the torque vs slip speed characteristic of an induction motor costant with respect to the frequency of the voltages applied?