Why does this rotary switch register multiple positions simultaneously?

New to electronics, tackling a project that involves a switch matrix. Having grasped the concept of regular button matrices and modifier keys, it’s time to move on to explore alternative types of switches, such as rotary and slider switches. However, I came across the following issue: 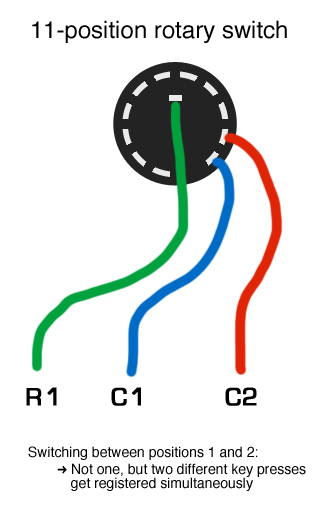 Why does this happen? At first I wondered if this was some sort of manifestation of the ghosting phenomenon that I read about when learning about regular button matrices, but I’m doubtful: if I think about this wiring, if I had hooked up the first legs of button switches to the same Row1, and their second legs individually to Column1 and Column2 respectively, then I would only be getting one registered key press at a time. What makes this rotary switch wiring different?

(I thought I wouldn't need to wire all 11 positions until I get the principle to work with the bare minimum first.) 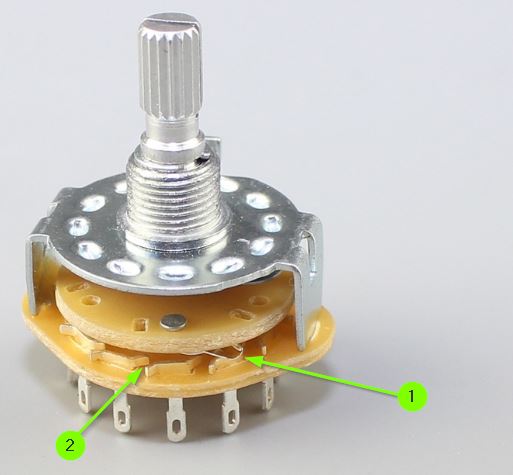 Figure 1. The "make before break" switch. Note the wiper (1) will bridge the adjacent contacts (2) when switching from one position to another.

These switches are used when you want to avoid disconnecting the signal completely when switching from one position to another. e.g., If your switch was used as a volume control with a chain of resistors wired between each contact tab then this will give a glitchless switching whereas a break-before-make switch will disconnect the audio momentarily resulting in a glitch.

The break-before-make variant will have a gap between contacts (2 above) to prevent short-circuiting.

I programmed three distinctly different sounds to play back per each rotary position, and indeed, they never play simultaneously, only one at a time, upon 'arrival'.

Without a schematic diagram I can't comment on what you have done here.

I connected a third throw to test how many things happen whenever the position is changed: is it always two, or as many as there are connected throws. With three connected, apparently it's still just two that activate, not three. That's an important clue.

On a closer inspection from the programming interface, it appears that the observed activity that happens in two positions simultaneously is not identical: The other activity is that switch going to ON position, and the other switch going to OFF position, as should be. For a further test, I programmed three distinctly different sounds to play back per each rotary position, and indeed, they never play simultaneously, only one at a time, upon 'arrival'.

Where I first observed the phenomenon that multiple key presses were being registered, it only indicates that actuating has happened, but it doesn't say if it's ON or OFF. Having used this with push buttons only up to now, I was under the impression that actuating indicators blink only when the button is switched to ON position. Now that I think of it, it's silly to assume that it wouldn't be equally important to report OFF messages: some types of switches are normally open, and being off is the state that's exceptional!

Not the answer you're looking for? Browse other questions tagged switches wiring matrix rotary or ask your own question.