Recently,i read some paper,and some of paper said :

2.What is subthreshold circuit?Can anyone give me an example?

3.Why can the low-threshold voltage transistor and a large size transistor improve the driving capability? especially the large size,can it know from some formula?

1) Have you read this article Wikipedia? Subthreshold region means using the MOSFET in weak inversion (as opposed to strong inversion as you'd normally use) by using a \$V_{gs}\$ slightly less than the value of the MOSFET's threshold voltage \$V_t\$.

Normally we say that a MOSFET will not conduct when \$V_{gs} < V_t\$ but that's not entirely true, it does conduct but only very small currents (compared to the currents when \$V_{gs} > V_t\$) can flow.

So yes, subthreshold is related to the MOSFET's threshold voltage

2) The circuits are often the same as we're used to but running at much less current. So for example an NMOS of W/L = 10um/1um with an Ids = 100 nA would be close to working in subthreshold or weak inversion. You could also use a more "normal current" like 10 uA flowing through a very wide MOSFET (like W = 1000um) which would then also be working in subthreshold or weak inversion mode.

3) Yes a larger transistor (more precise: a wider transistor) can of course carry more current. But that making the transistor wider increases the gate capacitance so it will also require more current to drive it.

Regarding the formulas for subthreshold region: consult almost any book about CMOS circuit design.

In the subthreshold region of MOSFETs, the gate to source voltage \$V_{GS}\$ controls the Drain to Source current \$I_{DS}\$ and is similar to the exponentially increasing current of a forward biased diode.

Just as in all diodes the capacitance reduces with reverse bias voltage and increases with conductance, MOSFETs also share this behavior when used (over threshold) as power switches. The size of chip and the gate charge increases as RdsOn reduces, so one Figure of Merit is the product Ciss*RdsOn. They are not on the datasheet since other factors like geometry, voltage rating affect this product in the choice of "a million" different MOSFETs.

Sub-threshold effects are used for many other applications but pertaining to this question there is a dynamic relationship between leakage current and capacitance. Ref on slope

As power switches, the Vgs threshold (Vgs(th) is at some rated curent like 0.5 mA was typically 4V with a wide margin and then the need for lower Vgs and lower RdsOn altered the geometry and construction of the FET length to width ratio to change the thresholds lower. Low Vgs(th) <1V are suitable for 3.3V logic level drive.

Still you need Vgs to go past Vgs(th) by 2.5~3x 250~300% to give a good low RdsOn rating. Since RC=T affects slew rate this affects the SMPS design speed on component selection. There is both a junction charge from gate to drain and gate to source.

One day I analyzed Digikey's TO-220 NFETs for RdsOn vs Q and this was the result. Recall Q = CV. 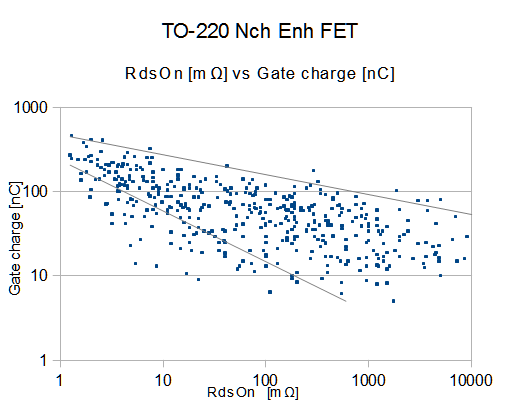 I found the spreadsheet now , if anyone wants it.

Be careful with subthreshold circuits. You can badly degrade the jitter (phase noise) of logic signals, or XTAL oscillator output signals, using subthreshold designs. The slow edges, and the higher noise compared to squarelaw region, will cause problems.

Not the answer you're looking for? Browse other questions tagged mosfet power-consumption gate-driving or ask your own question.

0
High side switch using complementary MOSFET: pull up/down calculation
2
What does the subthreshold swing of a mosfet actually mean?
0
Why does drain current stop increasing after a certain value of gate voltage is obtained by a MOSFET?
2
Measuring Power Consumption of a Mixed-Voltage Device
1
Subthreshold regime advantages/disadvantages
1
56 to 15 Volts Regulator for DC Motor Driving
1
Ultra low power arduino wireless sensor : care of battery discharge
1
How to design ultra low-power opamp?
0
How to derive this formula from this schematic?
1
BU2505FV current capability