Push-pull amp in class A what it mean

I take next sample schematic. 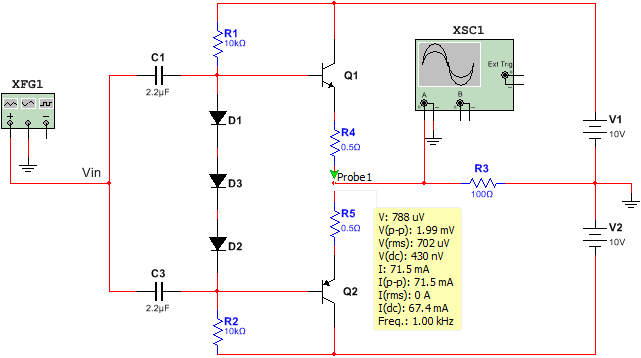 This is only an output stage of any real power amplifier. It's clear when it's work in B-class the every BJT amplify only one half of input signal. But what it means if it works in class A. I know that the current always go through BJT if it works in class A. And if signal is too small but enough to open the BJT it will amplify both negative and positive signal swings before the signal level achieves some value above that only part of that signal will be amplified with "N" or "P" stage accordigly. Ok, if both parts of small signal amplified with every parts of a power amplifier, how do they added on load resistance? They both must have opposite direction and must differ from each other and the 0 must be on load. Here is a trick that I can't understand. Any suggestions?

They both must have opposite direction and must differ from each other and the 0 must be on load.

Assume that we have a small but positive input signal, meaning the voltage rises. What will happen:

So the currents do not have cancel but actually add up.

When the NPN supplies more current it is also "helped" by the PNP as the PNP will draw less current.

It is like the NPN is "pushing" more while at the same time the PNP is "pulling" less. So both NPN and PNP contribute to the change in the current through the load.

Not the answer you're looking for? Browse other questions tagged bjt push-pull power-amplifier or ask your own question.

1
BJT Input AC Signal Amplitude
1
Problems in push-pull biasing
6
Confusion between Class B and Class AB Amplifier
6
How to keep current from draining out the bottom of this push-pull amplifier?
6
Understanding class A amplifier waveforms
5
Designing 2-stage BJT CE class-A voltage pre-amplifier with specified goals and without global NFB
0
What is the use of resistors in series with BJTs in a push pull amplifier configuration?
0
BJT Low Current Consumption Amplifier
0
Inverting Charge Pump with Push/Pull Stage
0
Class AB power amp output