I have a device that is controlled by connecting a resistor between two of its connectors. The resistor can take any value between 0 and X, where X is an odd value. (E.G. X=1523ohm)

Does anybody have an idea how I can realise a circuit whose resistance can be varied manually between 0 and X? There must not be the possibility that due to user error the resistance is larger than X!

Like gbarry says. The next higher value you find in the Digikey offering is 2 kΩ, so you would need a 6386 Ω resistor in parallel. That is between one end and the wiper, not across the full resistance. 6386 Ω is also an odd value, so you may want to compose that using different standard values as well. 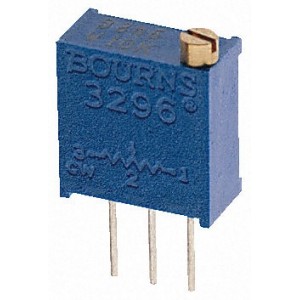 Note that placing another resistor over the potmeter's wiper distorts its linear characteristic. 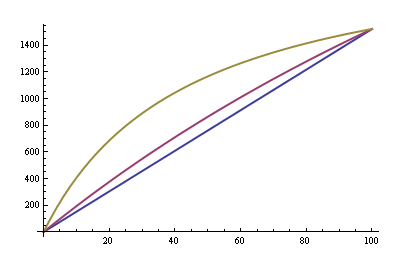 The greenish curve shows the resistance as a function of the rotation in % for a 2.2 kΩ resistor parallel to a 5 kΩ linear potmeter. The purple curve shows that resistance for the 2 kΩ potmeter plus the 6386 Ω, so that's not so bad after all. The rule for the most linear characteristic is to have the ratio resistor/potmeter as large as possible.

Choose a variable resistor--probably the next value up from 1523 ohms would be best. Then, calculate a resistor in parallel with the maximum setting that gives you 1523 ohms. Now you are at 1523 at max, and can adjust it down to zero.

12
6 LEDs in parallel with a single resistor to simplify soldering
1
Why are resistor values constant in the face of changing voltage and current?
3
Calculationg base-resistor between microcontroller and transistor
3
How to get a variable voltage from a variable resistor
0
Vary equivalent resistor linearly between two values
0
Which resistor for my LEDs parallel
3
power supply remote sense protection resistor value?
0
Log-Taper Variable Resistor from Linear-Taper
0
Limit variable resistance upper bound?
0
Fake thermostat with resistor