I would like to know how to solve for Zin of the non ideal non-inverting amplifier shown below: 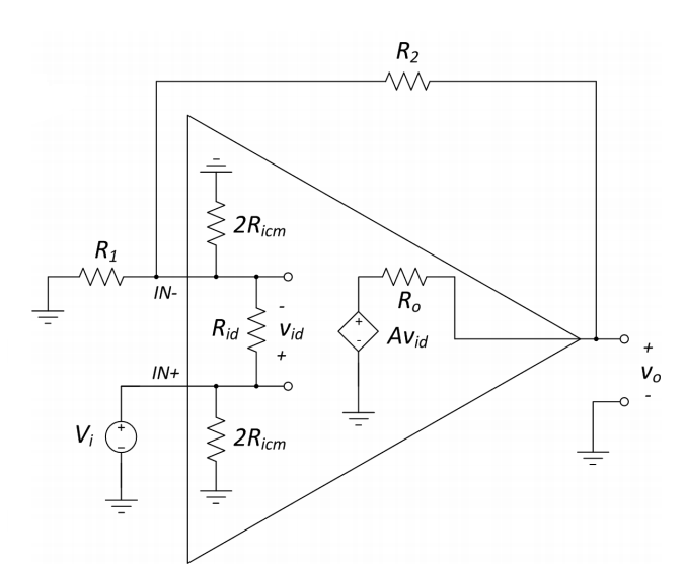 EDIT: Maybe I should have been more precise regarding my question. I'm dealing with a textbook not really showing anything. Of course I can use shortcuts regarding negative feedback, I can also use google (altough I haven't found any links properly explaining what I'm seeing here), and I understand the basics of negative feedback.

I want to solve it simply using standard analysis method, \$Z_{in} = V_{i}/I_{i}\$. The author does the following steps:

If someone could explain these steps that would be really useful to me so I can get on with my reading. I'm more interested into the analytical solution than why I get the final result.

Due to negative feedback, the IN- voltage will be pulled towards IN+. The voltage across \$R_{id}\$ is therefore kept very small, causing only a very small current to flow from IN+ to IN-. So because of feedback, the resistor \$R_{id}\$ looks bigger. We are dealing with series-shunt feedback!

To be correct, the equivalent resistance to ground at IN- still has to be added in series to the modified \$R_{id}(1+\beta A)\$, but this contribution will probably be much smaller.

So you end up with a total input impedance of approximately

As you can see, the formulas reflect again that the current is artificially made small by the feedback. \$V_x\$ is brought closer to \$V_i\$ by \$V_o\$, and this reduces the current through \$R_{id}\$ compared to an \$R_{id}\$ to ground.

Here are some hints: -

Take that on board and you should be able to see that under these circumstances, the input impedance is purely \$2R_{icm}\$. It is precisely this figure because, with both inputs at the same level, there can be no current flowing through \$R_{id}\$.

When A is finite (a real amplifier) the voltage difference between both inputs drives the amplifier to produce the output voltage. So, there is a voltage difference across the inputs in a real amplifier and this voltage is a fraction of \$V_i\$. Now the input impedance becomes more complex to calculate because you have \$2R_{icm}\$ in parallel with some factor x \$R_{id}\$ and that factor is based on the open-loop gain (A) being non infinite.

If you still can't figure this yourself there are various proofs on google for op-amps with finite values for A.

Not the answer you're looking for? Browse other questions tagged circuit-analysis amplifier or ask your own question.