Full AM signal vs DSB-SC

I conducted an experiment where I constructed a Full AM signal and changed the message signals amplitude to change the modulation index of the Full AM signal. I then increased the amplitude of the modulator chip until a DSB-SC signal was made. Although they look really similar, I was wondering what the difference between them is.

Can somebody tell me what the difference of the two pictures I have uploaded are please?

Look at the two closely. There is a significant difference, even if just looking at the amplitude envelope.

Look at just the top envelope of the AM signal. It is the same sine as the carried signal. However, note that the tops of the other signal are effectively the absolute value of the sine. This results in two obvious differences you really should be able to spot. The dips are "sharp", and the frequency is double.

What you can't see on the scope at this magnification is that the lower carrier has its phase flipped 180° every hump. One way to think of this is over-driven AM. When the negative peaks of the carried wave go lower than what causes the carrier to have 0 amplitude, it causes a sortof "negative amplitude" which is the carrier with inverted phase.

With simple (less than 100%) modulation (as used in broadcast music channels) you get this: - 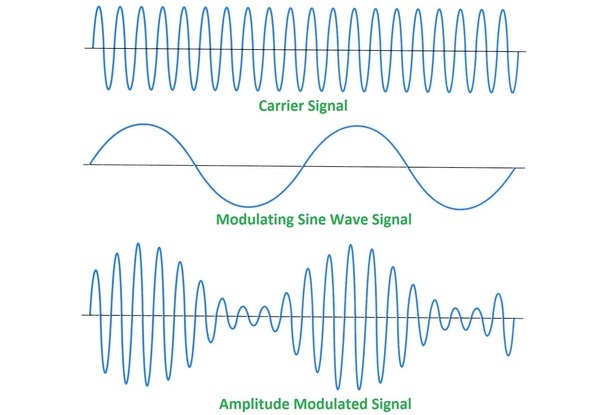 If you go over 100% modulation, the troughs in the modulated waveform above start to become small peaks with a reversal of phase of the carrier: - 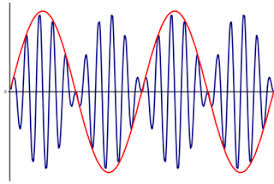 In this scheme, because the carrier reverses phase each half cycle of the modulator there is, in effect, no carrier frequency amplitude and hence it is called "suppressed carrier".

Here is a picture of three DSB waveforms with different levels of modulation: - 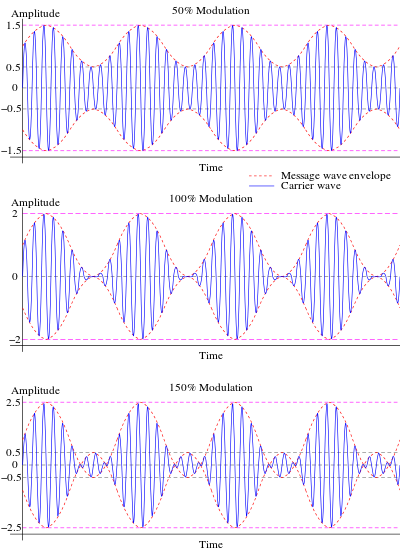 Hopefully you should be able to see in the bottom picture the anomaly in the carrier as modulation rises past 100%. This prevents it from being used for transmission to radios that have a simple diode envelope detector.

In AM the carrier has no polarity reversals beyond those which belong to normal sinusoidal form. In DSB the carrier sine is inverted when the low frequency signal is negative.

If your low freq signal happens to be zero, the AM signal has typically amplitude=50% of the maximum, the DSB signal is zero.

Not the answer you're looking for? Browse other questions tagged signal am or ask your own question.