I am trying to use a digital potentiometer to reduce the amplitude of a square wave. I am getting what appears to be capacitive feedthrough on the rising and falling edges. This is getting amplified by later stages and causing glitches in the output.

Looking at the scope screen shot below, the cyan trace is the ~12v/us square wave input and the yellow trace is the wiper output of a MAX5387 100K digital pot set for about a 96K : 4K divide. After recovering from the initial glitch, the yellow trace exponentially settles to the expected value after about 4uSec.

I have looked up capacitive feedthrough for digital pots and have not found anything. It is not spec'd in any datasheets that I have seen. ADI lists digital feedthrough for some of it's pots, but that's about it.

I assume that digital pot capacitive feedthrough is a known phenomenon. Any idea which particular pots minimize it or how to mitigate it in general?

At this point my only option seems to be slew rate limiting the input square wave to a slope similar to the post glitch RC slope. This takes an extra op amp stage. I don't want to just put an RC on the input, since I need the edges to be symmetric and as fast as possible. Any other ideas on how to avoid the initial glitch? 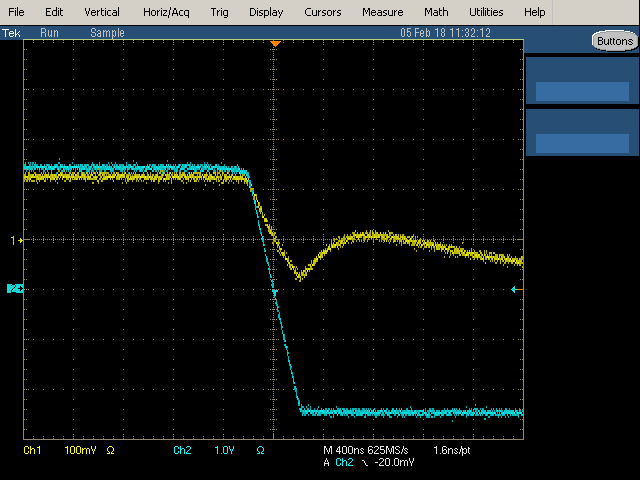 Some capacitive coupling should occur, although it depends on the internal circuitry. The datasheet of your digipot does not show frequency response curves.

Thus I would recommend selecting a digipot with lower resistance, and one that has a specified frequency response, without a HF peak.

Digital potentiometers are typically constructed using MOSFETS that connect to a series of resistors. Those MOSFETs do have some some capacitance associated with them.

The MAX5387N is a 100K digital potentiometer with 256 steps, so at mid scale the output-resistance of the potentiometer is 50K in parallel with 50K, which is 25K. Page 3 of the MAX5387N datasheet lists the 3dB bandwidth as being 75kHz with the code set to midscale (80h).

An equivalent capacitance can be found from the bandwidth as follows...

Note that the output capacitance will vary with code, but mid-scale should be the worst case.

Just based on the MIDSCALE FREQUENCY RESPONSE graph on page 7, you probably won't want to use the MAX5387N for signals that have any components above 10kHz.

Thus you should be sure the Digipot VDD is well-bypassed right at the pin.

Keep those gates quiet. That means the logic decoder needs a hard-VDD voltage and a hard-GND voltage.

Not the answer you're looking for? Browse other questions tagged digital-potentiometer or ask your own question.