I have four mini generators run by a blower. Each generator generates about 2 to 3 volts. When I connect all the four generators I get about 10-11 volts of AC. I convert the AC into DC using a bridge rectifier and get about 9-10 DC volts.

The moment I connect the DC into a 3 or 6 volt DC motor the four generators slow down or stop. What is happening here and how do I correct it?

You are witnessing the loading of your generators. It's one of the things that ruins perpetual motion schemes such as connecting a generator to your car to power the electic motor that's driving it. The electrical load on your generators will put a mechanical load on their rotation and slow them down.

You have another problem too. You are series connecting four alternators that are not synchronised in phase. If they are running slightly different frequencies then they will "beat" as they go in and out of phase with each other.

Figure 1. The sum of two sinewaves of different frequency. The "beat" is the difference between the two frequencies. Sourc: Vibration School.

If your voltages were a bit higher I would recommend rectifying and smoothing each generator but with such low voltages the diode losses will probably be unacceptable. 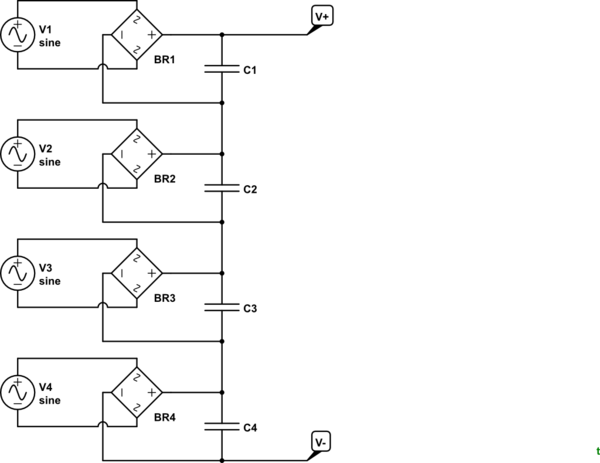 Figure 2. Conversion of each alternator output to DC solves the phasing problem but voltage drops on the bridge rectifiers will be very significant at low output voltages.

2
Can I make a rectifier to convert from AC to DC?
7
How to tackle regenerative current in my H-bridge
0
Taking an unstable DC voltage, and stabilizing it
0
trying to increase current output of a generator
0
DC motors in series to get 5 Volts?
0
Parallel motors on the same output
1
How does supplying a DC motor with lower than rated voltage affect current draw?
1
Connect negative terminal of a battery to Earth