Here is an image with the different connectors. Most of them have 5 pins, but the A-type host only has four. 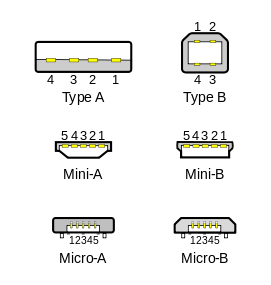 It's for On-The-Go, to select which device is the host or slave:

To complete Oli Glaser's answer, 5 pins USB respects the On-The-Go standard (OTG). The additional pin added to the conventional USB port is the ID pin added to the 4th electrical pin, and allow to recognize the device. Here is the resulting electrical setup of the pins:

As compared to other 4-pins USB devices, where there is no ID pin, the advantage is to be able to distinguish the host device from slave devices. 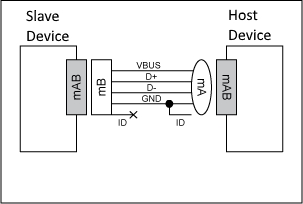 There is no info carried by the 4th pin. When connected to the ground (5th pin) it serves to notify the host that it is connected to a dumb-client device instead of a smart-client device. This is confusing at best because some client devices only act as dumb-clients and some client devices can be either smart-client, another peer-host, or a pass-through repeater. You will probably only ever see OTG actually used in case of a keyboard being plugged into the micro or mini connector on a tablet computer. Other client devices usually have enough inherent software capability to notify the host that they are a client using the normal 4-wire USB connection.

As shown here the original type A and B connectors use four connections, D+ and D-, which are differential data signals, along with ground and +5v. The newer mini and micro connections add an ID signal.

Before USB OTG was popular, the 5th pin was an auxiliary pin to allow the USB port on portable devices to be used for other purposes via passive components/circuits. A resistor array in the cable would indicate the function of the cable to circuitry in the device. Sometimes this could be a composite TV out, but it was mostly used for audio. Manufactures HTC and Motorolla did this audio out on many phones, with different pinout schemes.

None of the answers are quite correct/complete.

From Microchip FAQ on the subject:

Below is a general guide for connecting the USBID pin from a microcontroller:

So you should NOT leave the ID-pin floating if you've got OTG functionality in mind for your tablet or whatever. In that case connect it to the ID pin on the Micro-B (*) connector. The OTG cable grounds the ID pin unlike a regular USB cable so your tablet knows to expect that USB stick on the other end of the cable which requires power etc.

Basically if the ID signal going to processor signal is grounded, that device wants to supply power to the USB and initially behaves as the host. The roles can then be reversed by negotiation over the USB but that's off your hands as the hardware designer unless you dapple in firmware as well.

Presumably the ID pin should have a pull-up either internally or externally on the OTG device but the datasheets are vague on the subject.

(*) According to the standard it should be really be a Micro-AB connector which can take both A and B plugs and A-connector should indicate OTG usage. In reality you're probably dealing with a Micro-B plug to USB-A socket cable.

9
Are Micro A USB plugs actually ever used?
6
What to do with USB 3.0 ID pin?
2
How to connect atmega32u4 to USB
2
How is "plug-in auto detection" realized with this circuit?
2
Which ground plane connection will perform better in terms of EMC?
0
uC IO pin driven "low", but voltage sits at 0.3V, not 0V
1
Combining power input and USB data port for a Raspberry Pi Zero (W)
0
Female micro USB with 3.3V USB webcam

219
Why was Mini USB deprecated in favor of Micro USB?
3
Why can't I solder to this micro USB adapter?
2
Problem with making a USB 3.0 A/B/Micro adapter - detects cable as USB 2.0
0
Why USB type A to micro USB type B aren't all the same?
0
What are these incompatible micro usb type B plugs?
7
Can USB Type-C 2.0 upstream (device) connect its CC pins and share a pull-down?
1
USB 2.0 Pogo pins
0
Correct way to wire USB 2.0 Type C connector?
1
5 Pins soldered from a USB 2.0 type A cable