Approximating dynamics in continuous-time with discrete-time

I'm not sure if this is the best place to ask this question, so please direct me to the appropriate community if this question seems out of place here.

I am working on a project in which I'm trying to generate chaotic behavior in a system consisting of three RLC circuits interacting with each other nonlinearly with feedback. The system is intended to be a highly simplified model of a real-world phenomenon. Each circuit is driven with two inputs:

Chaotic behavior in circuits has been demonstrated by Chua et al. in the so-called Chua circuit.

I have two ways of generating the sinusoidal inputs to the circuits. First, I can use standalone function generators, which, according to Wikipedia, generate signals by charging and discharging a capacitor. Second, I can use a data acquisition system (or DAQ), which interfaces with my computer and generates signals by sampling a virtual waveform and outputting the samples. The value that is outputted is held for 1/F_s seconds, where F_s is the sampling rate.

For convenience, I would prefer to use the latter because the input can be easily controlled (switched on or off and the amplitude or frequency adjusted) based on measurements of voltage that I take across different elements in my system. However, because the signal generated by the DAQ is not truly continuous-time (unlike the real world in which time is continuous) in the sense that the outputted value is only updated every 1/F_s seconds, I'm wondering if the interactions and feedback will be able to accurately recreate the same type of chaotic behavior that truly continuous time inputs (such as those generated by a function generator) would produce.

Importantly, my sinusoidal input signals are band-limited to 100 Hz and the sampling rate of the DAQ can be up to 80 kHz. At low sampling rates (less than 1 kHz), I can clearly see jumps in voltage between successive samples when I measure the DAQ-generated signal on an oscilloscope. At higher sampling rates (tens of kHz), these jumps essentially disappear (even though I know they are there and just cannot be seen).

I'm wondering if the interactions and feedback will be able to accurately recreate the same type of chaotic behavior that truly continuous time inputs (such as those generated by a function generator) would produce.

Yes, it will be able to recreate the chaotic behavior, but only if the response of the non-linear system is limited to 100Hz (which it is probably not).

If you can prove that the response of the nonlinear systems response is bounded to below 100Hz then you don't need to be worried about what the digital system is doing to the analog system.

One method that might help determine this is to insert one or more low pass filters in the nonlinear circuit and observing the result. One problem I foresee is the circuit may suffer from bandlimiting because nonlinear circuits change behavior from tiny fluctuations (butterfly effect).

If the system works the DAQ will need a low pass filter on the output (probably at 100Hz) to recreate the signal and reduce the chopping from the zero order hold.

There are also different kinds of holds that you can use with a digital system to more accurately recreate a signal and the bi-linear transform to determine the response: 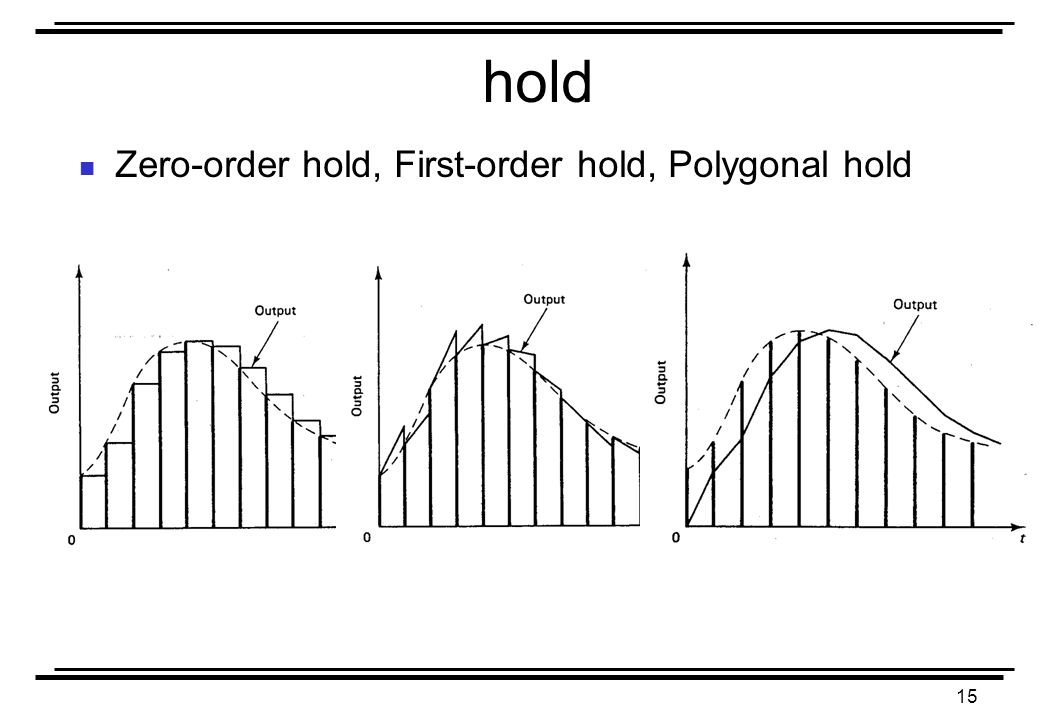 Not the answer you're looking for? Browse other questions tagged analog signal signal-processing function-generator time or ask your own question.