I'm trying to create project where I can light up WS2812B whatever color I want and specific RGB color code is delivered through UART. So when I receive the code I'm trying to send data to WS2812B but it seems to be working only every 2nd time when it actually shouldn't and it doesn't work at all when it should.

I'm using Atmel's Atmega328P-PU and its CPU speed is set to 8MHz. This code actually worked fine when I 1st wrote it but I had to change some stuff in UART section so had to compile and flush it again but this time it was done from Linux using avrdude command line tools instead of Windows 7(which was on my friends PC and got deleted).

This is data timing diagram for WS2812B 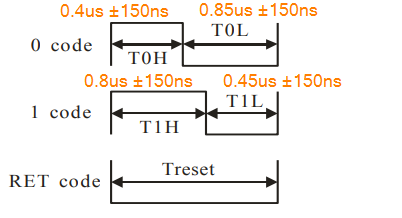 Everything in code works fine except for sending '1' and '0' to LED and it happens in function set_leds_color. Weird thing is that if I leave the __builtin_avr_delay_cycles(); values as they were before my UART code updates (and as are shown in code) it always sets LED's color to white kind of like it would always send only '1' to led (255,255,255). Even if I set delay for '0' to __builtin_avr_delay_cycles(1) nothing changes - any color is displayed as white. Now the interesting part is that if I remove this delay for '0' so code become like this

when I set the same color multiple times in a row - LED actually sets my desired color 1 time but 2nd time sets white again. This goes on. I have no idea what the problem is. I tested that __builtin_avr_delay_cycles() works as expected and my CPU frequency is indeed 8Mhz. I also sent rgb_array[] values from mcu to my PC thought UART and they are fine as well. Can anybody give me some suggestions what might be wrong? Thanks.

Here is my final code

So the weirdest thing fixed the issue. I created 2 more functions

and used these to send zero or one byte

If I take code out of these functions and put directly inside of if/else statement kind of inlining it I always get white color. I would be happy if someone could explain this weird thing.

Not the answer you're looking for? Browse other questions tagged led atmega or ask your own question.

8
Why are red LEDs so dim & how do I make them brighter?
6
RGB LED - Set intensity on Red and Blue
4
LDR + RGB Led = Color sensor. How to calibrate it?
2
how to get the RGB value of a color using phototransistor or photodiode?
1
Choose the right resistor for your RGB led (calibrate the colors)
4
5050 led strip 60 led/m flickers when fading in and out of colors
0
MOSFET driver working funny
0
NeoPixel led WS2812B doesn't shine when given equal RGB levels
1
RGB led weird color behaviour (blue except when touched to skin)
0
Common anode RGB LED lights going out one color at a time